Why did the Europeans, amazed by the beauty, lightness, and durability of the “oriental varnishes,” call them “witchcraft matter” in the XVI century? How did production “a la Chine” (“in the Chinese manner”) originate in Europe in the XVII century? Why was it so fashionable in the XIX century to have with you a painted jewel box or a snuff-box made of papier-mâché by the Braunschweig-based factory of Johann Heinrich Stobwasser?  Which of the Russian lacquer miniature masters did Maxim Gorky compare with Michelangelo? You will find answers to these and many other questions at the exhibition of one of the best of the museum’s collections, which has been painstakingly brought together and built over the past 40 years.

Russian lacquer miniature features not only the evolution of Russian centers of lacquer painting (Fedoskino, Palekh, Kholuy and Mstera), but also the history of the country — narrated by 300 works of outstanding masters, using artistic styles and images as the language and showcasing the artists’ craftsmanship. “Russian varnishes” sounds as good as other similar combinations: “Russian porcelain,” “Russian literature” or “Russian ballet.”

The technology of painted lacquer miniature differs greatly between schools. In Kholuy, they use backgrounds covered with a white pigment all over, upon which the image is painted with tempera afterwards. In Palekh, the backgrounds are always black. Fedoskino masters use a unique technology of multilayered painting with oil paints. Creating each box took a master several months. Quite frequently, it could take over a year to produce a miniature masterpiece. It is because of the peculiarities of the manufacturing process of such boxes that Russian craftsmen issued an unusual warranty for their products — 100 years!

In the early XIX century, many facilities producing varnished items emerged in Russia, but the renown of Russian miniature is closely associated with the work of Piotr Lukutin’s famous factory in the village of Danilkovo (which later became part of Fedoskino) in a Moscow suburb. The Fedoskino factory of miniature lacquer painting was founded in 1795 by the merchant Piotr Korobov; afterwards, the factory was inherited by merchant Piotr Lukutin and stayed in his family for nearly a century. In 1828, Lukutin received the right to brand the factory’s produce with a special hallmark shaped like a two-headed “golden eagle.” Fedoskino miniaturists preferred painting motifs that echoed the themes popular in art at the time: troikas, portraits, tea parties, still lifes, landscapes and scenes from peasant life of Russia and Little Russia. Looking at the Lukutin jewelry boxes, tea caddies, snuff boxes, matchboxes, album covers, please pay attention to the skillful painting. For instance, in the photo album “A Girl at Luncheon,” a true masterpiece of the Lukutin factory (first half of the XIX century), the artist conveys the texture of every detail of the girl’s costume.

Palekh icon painters were commissioned to work at the Palace of the Facets in the Moscow Kremlin, the cathedrals of the Trinity Lavra of St. Sergius (in today’s Sergiev Posad in a Moscow suburb) and the Novodevichy Convent in Moscow. After icon painting was banned in 1917, Ivan Golikov, a restorer and stage designer who hailed from a family of icon painters, was the first to try a special technique — miniature painting on papier-mâché. It was he who won Palekh world acclaim, and Maxim Gorky, who met with Golikov, likened him to Michelangelo. In the miniatures that look as if they were “seamed with gold,” the master’s painting shimmers with multiple color shades. Please pay attention to his works of 1920-1927, especially the glass “The Red Plowman and the Blacksmiths,” and also “The Deer Hunt,” “Razin Addresses the Riffraff,” his troikas and battle scenes. On December 5, 1924, the Cooperative Craft Society of Old Russian Painting was founded in Palekh, with seven masters as its members: Ivan Golikov, Ivan Bakanov, Alexander Zubkov and Ivan Zubkov, Alexander Kotukhin and Vladimir Kotukhin, Ivan Markichev. In 1925, the famous Palekh plate with a red plowman received recognition at an international exhibition in Paris.

The Kholuy lacquer miniature, which dates back to 1934, is considered the youngest of the Russian lacquer crafts. The exhibition presents the best works made between the 1930s and the 1980s, and one showcase displays the smallest works of Kholuy artists. They all feature decorative painting that covers the entire surface of an article — sometimes just a few square centimeters. Each of these little chests and boxes is a real gem. “The Frog Princess”, a box made by B.I. Kiselyov in 1972, is an outstanding sample of minute craftsmanship.

Mstera artists, unlike their Palekh counterparts, never used a black background, so the miniature world of their boxes looks joyful and very clean. All narratives unfold against the backdrop of a bright, carefully painted landscape with a shining blue sky; less often the action takes place inside “Russian chambers.” The exhibition presents works of masters of the 1930s, exquisite in their colors and plasticity of shapes. The lacquer miniature seems to be filled with the romance of building a new society, grandiose plans and dreams of shaping a bright future. Miniature artists managed to convey the rhythm of their time with surprising accuracy, while maintaining a connection with tradition, vibrant colors, and overall cheerfulness.

Contemporary works by artists of all the major centers of lacquer miniature complete the exhibition. 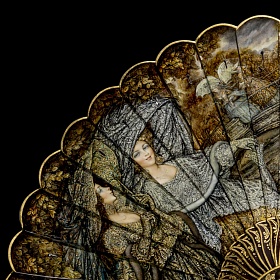 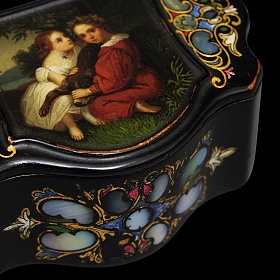 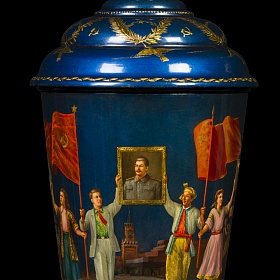 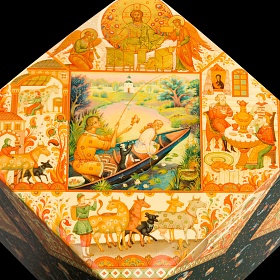 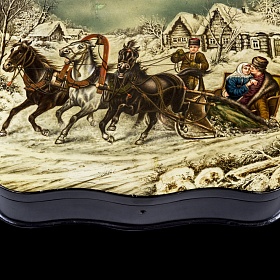 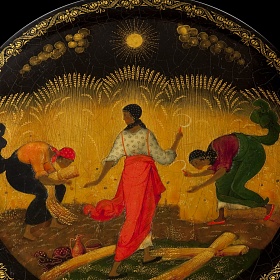 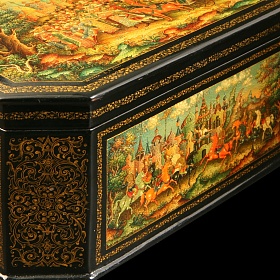 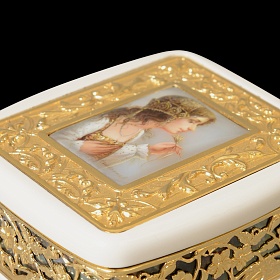 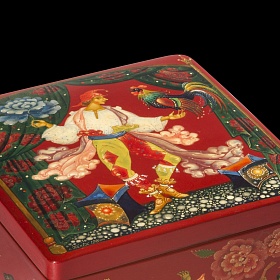 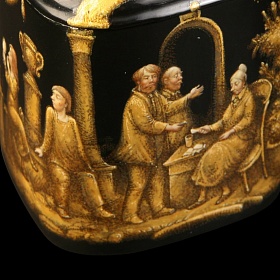 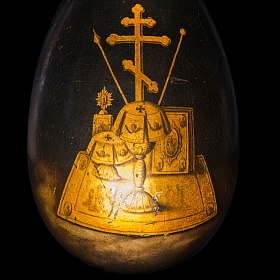