The furniture collection includes samples of Russian furniture art of the XVIII – XX centuries and accounts for over 600 pieces. There are items of Baroque, Classicist and Empire periods, historical styles of the middle and second half of the 19th century, Art Nouveau, Constructivism and Soviet Neoclassicism created in the 20th century.


The structural basis of the collection consists of pieces made according to the designs of outstanding architects of different eras: Giacomo Quarenghi, Osip Bove, Fyodor Shekhtel, Nikolai Sultanov, Alexander Tamanov (Tamanyan) Boris Iofan, and others. "Furniture of Architects" in the last three centuries set the tone for the development of the entire furniture industry. It was copied and varied, the ideas of designs and finishes were used by both large furniture firms, small estate and even artisanal workshops.

The Museum's collection presents items that once were used to furnish the estates, palaces and mansions of Russian aristocracy in the late XVIII – early XX centuries: the Kurakiny, Vyazemsky, Gagarin, Scherbatov, Yusupov, Grand Duchess Elizabeth Feodorovna, industrial magnate and patron of art at the turn of XIX – XX centuries Savva Morozov.

The unprecedented in its completeness and artistic level collection of furniture made in the Russian style of the late XIXth – early XXth centuries by Abramtsevo, Talashkin, Sergiev Posad and Moscow Artisanal Museum is a special pride of the museum collection. These objects were designed by E.D.Polenova, A.M. and V.M.Vasnetsov, V.I.Sokolov, N.Y.Davydova, S.V.Malyutin, A.P.Zinoviev and A.N.Durnovo. In the 1980s the All-Russian Decorative Art Museum was the first museum to start purposefully collecting works of the Russian style: at that time objects of that period were not yet fully appreciated not only by collectors but also by specialists. The staff of the museum managed to build up a collection of a very high artistic level, including exhibits based on the designs of major authors of this stylistic direction. In 1999, the collections of the All-Russian Decorative Art Museum and the Museum of Folk Art, whose collection preserved the reference samples of Russian-style objects created according to the designs of the Moscow Artisanal Museum, were united. Besides, the library of the Art Industry Research Institute, which was also transferred to the Museum, kept many designs of these works, as well as price lists with pictures (photographic price lists) of the Artisanal Work Shop that operated at the Museum. Thus, a collection, which is unparalleled in this field of collecting, was formed.

Another section of the collection is furniture of the mid-twentieth century. Here the interior ensemble of the front rooms of the building of the Presidium of the RSFSR Supreme Soviet (now one of the buildings of the museum complex), created in the first post-war years according to a project by Vladimir Gelfreich, deserves special attention. In addition to the rich architectural and decorative decoration of these rooms, including built-in furniture, the museum has also preserved the items that used to fill the interiors. In 2011 a very significant fragment of the interior of a famous Moscow confectionery on Pyatnitskaya Street was given to the museum. Today it is the only surviving example of decorations of Stalin-era Moscow stores, made in the "palace" style, designed to demonstrate food "abundance" and the achievements of the Soviet state.

A separate, and very important, section of the collection consists of the works of peasant masters - painted furniture items of the Russian North and the Urals in the 19th – early 20th centuries, collected through expeditions of the Museum and the Art Industry Research Institute. It includes elements of architectural decoration of interiors (Ural) and facades of peasant houses, mainly of the Middle Volga region.

At the present time the museum's furniture collection is developing and being replenished mainly due to generous and occasional donations, thanks to which the museum forms a section of the collection representing furniture items of the modernist era of the 1960s and 70s. 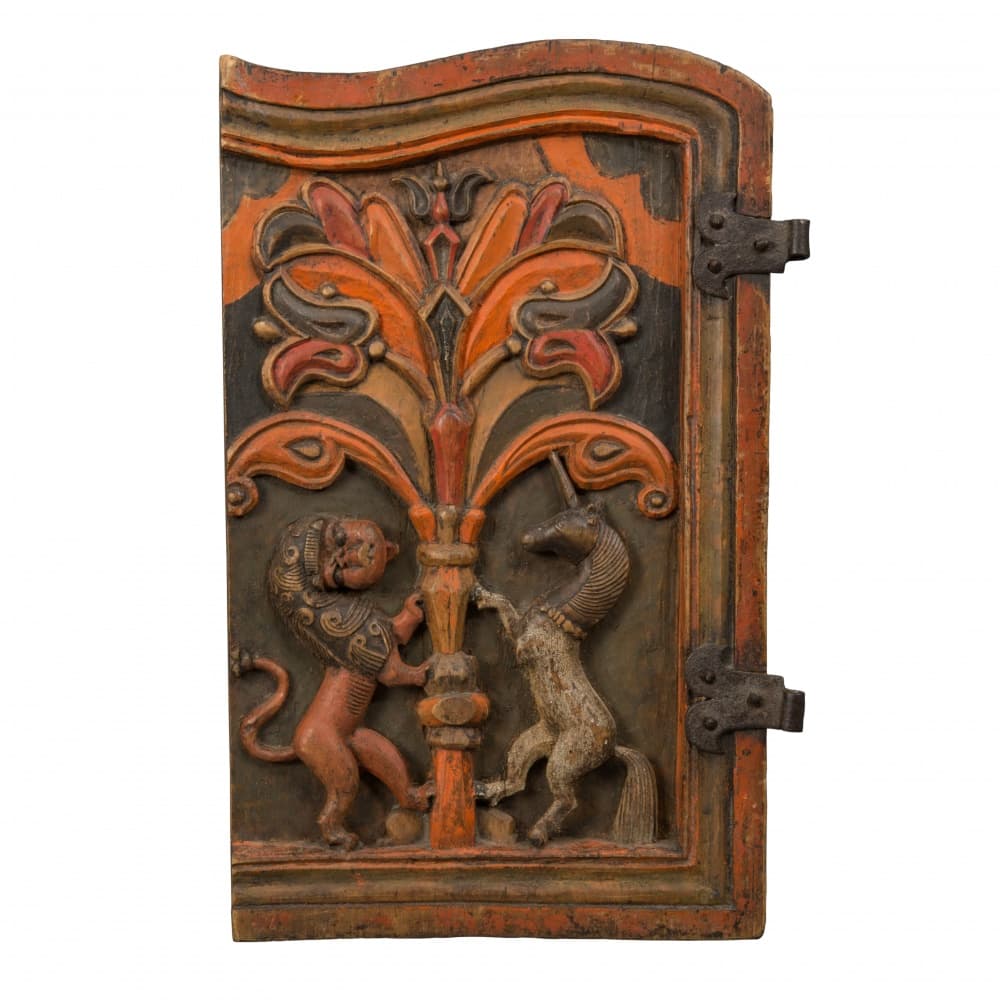 CLOSET DOOR WITH LION AND UNICORN 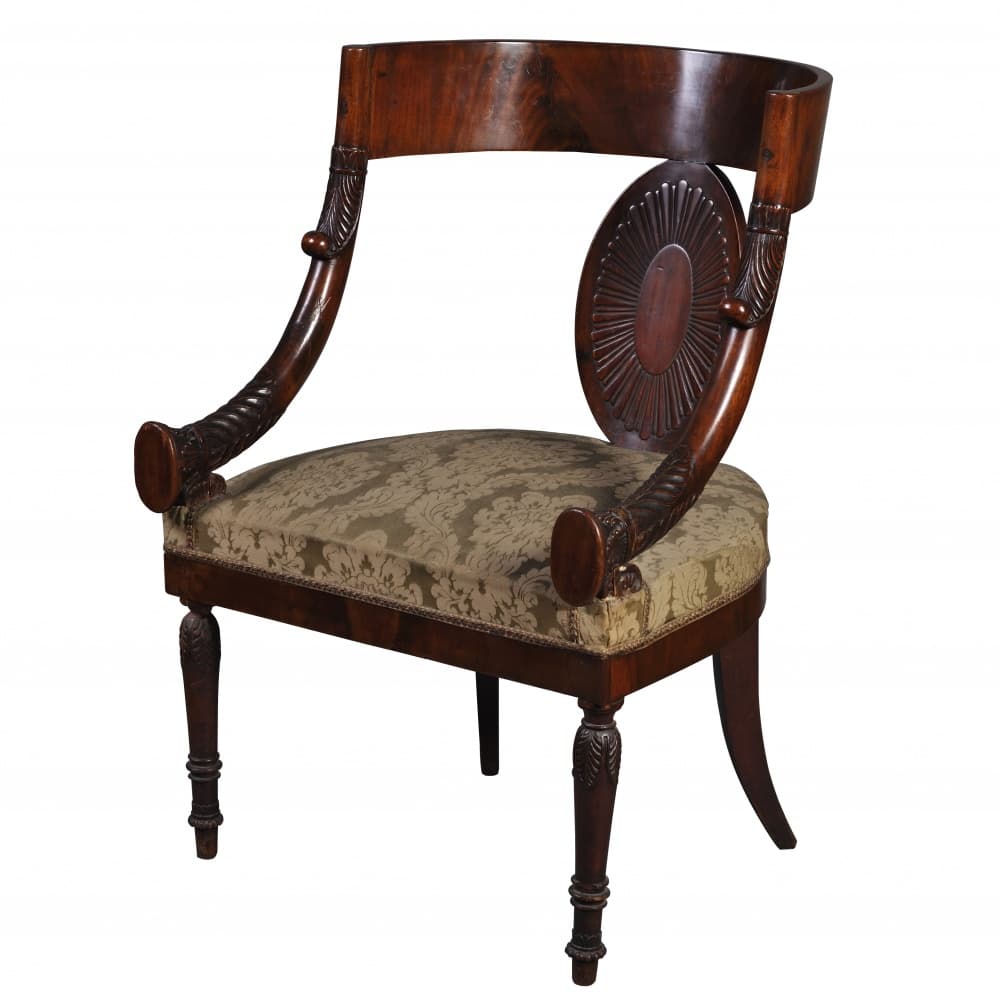 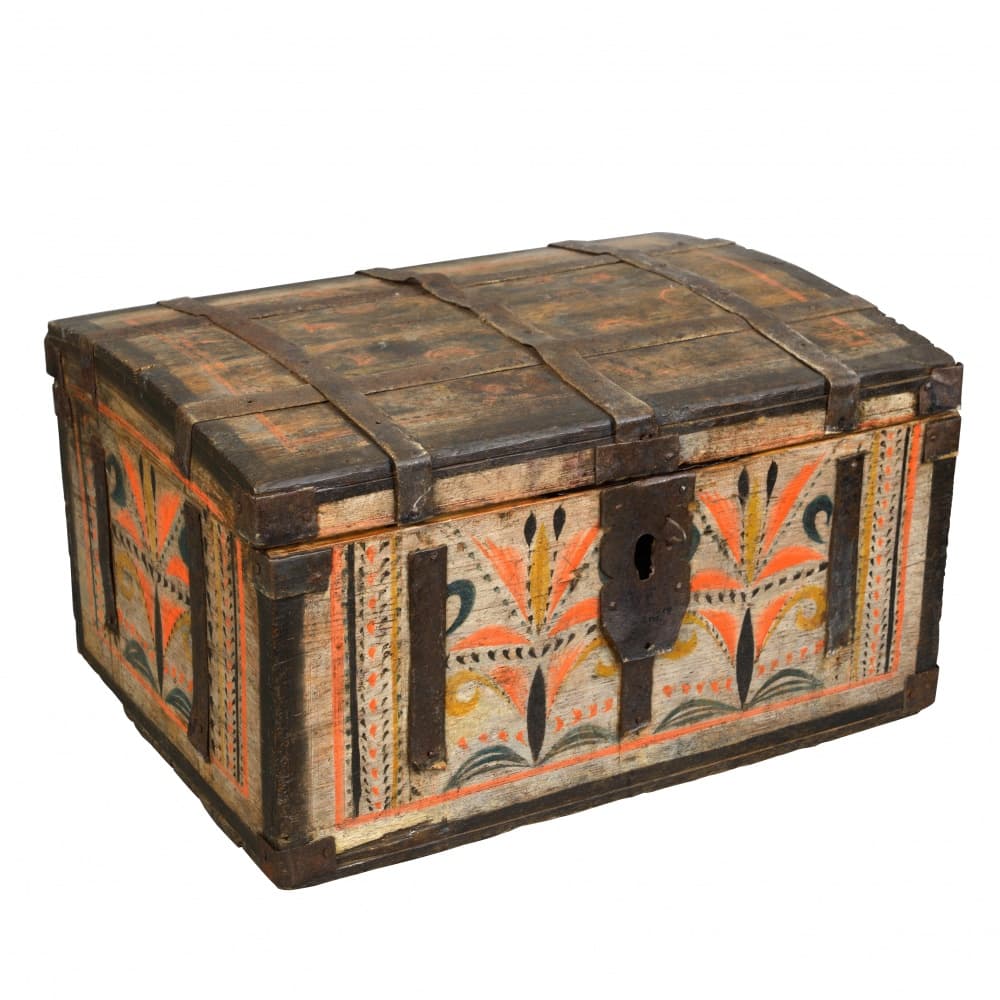 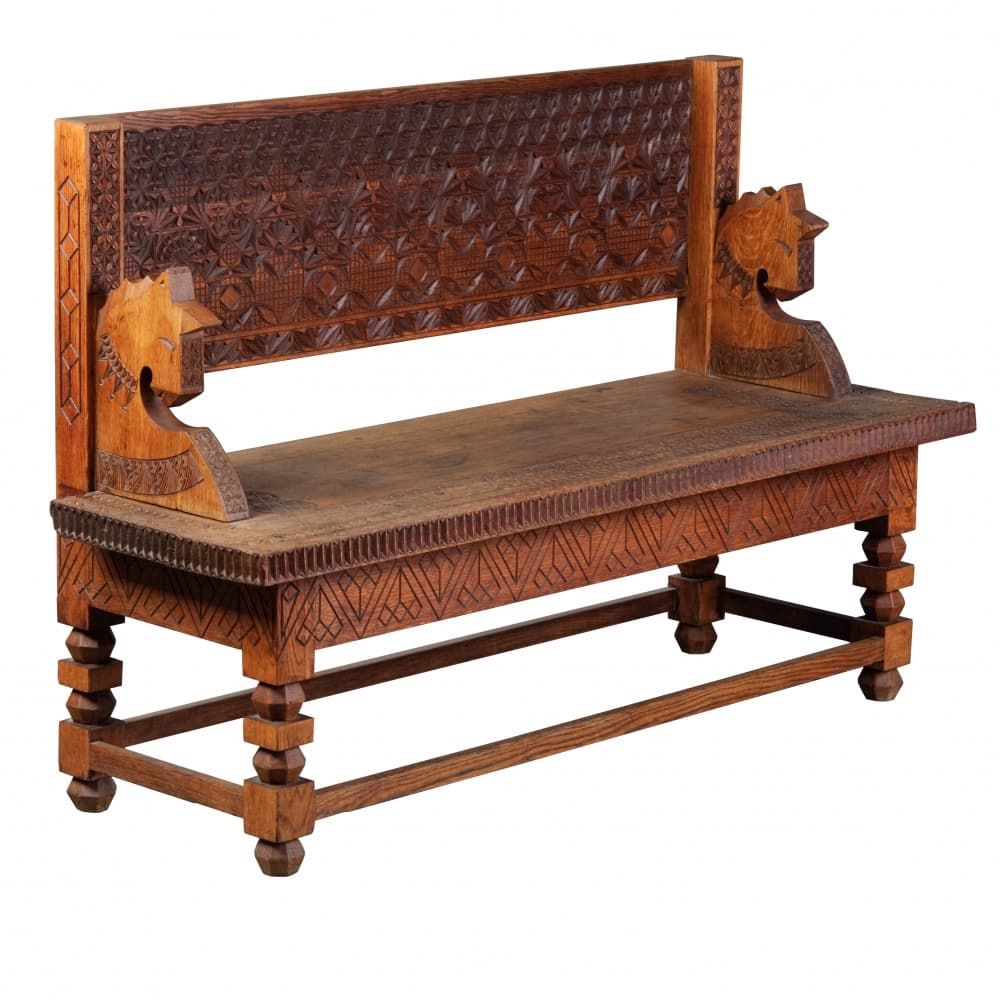 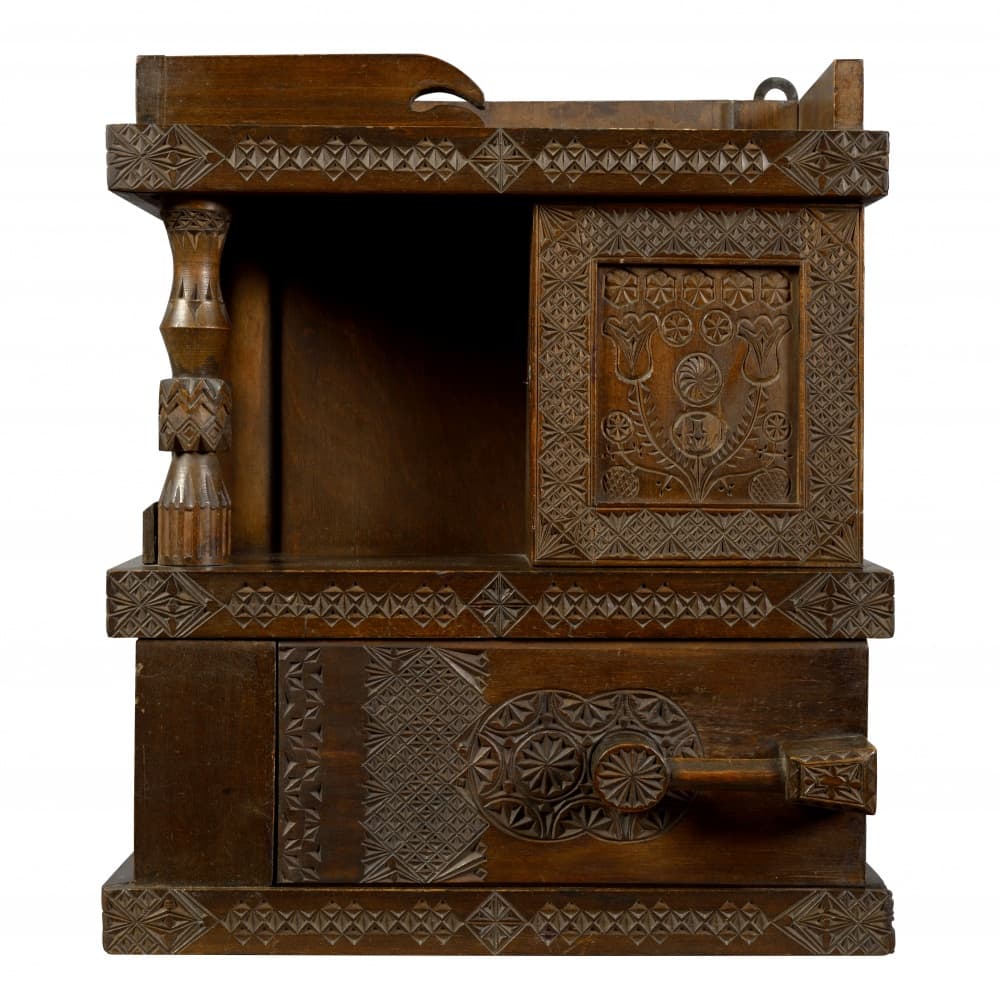 CUPBOARD WITH A "COLUMN" 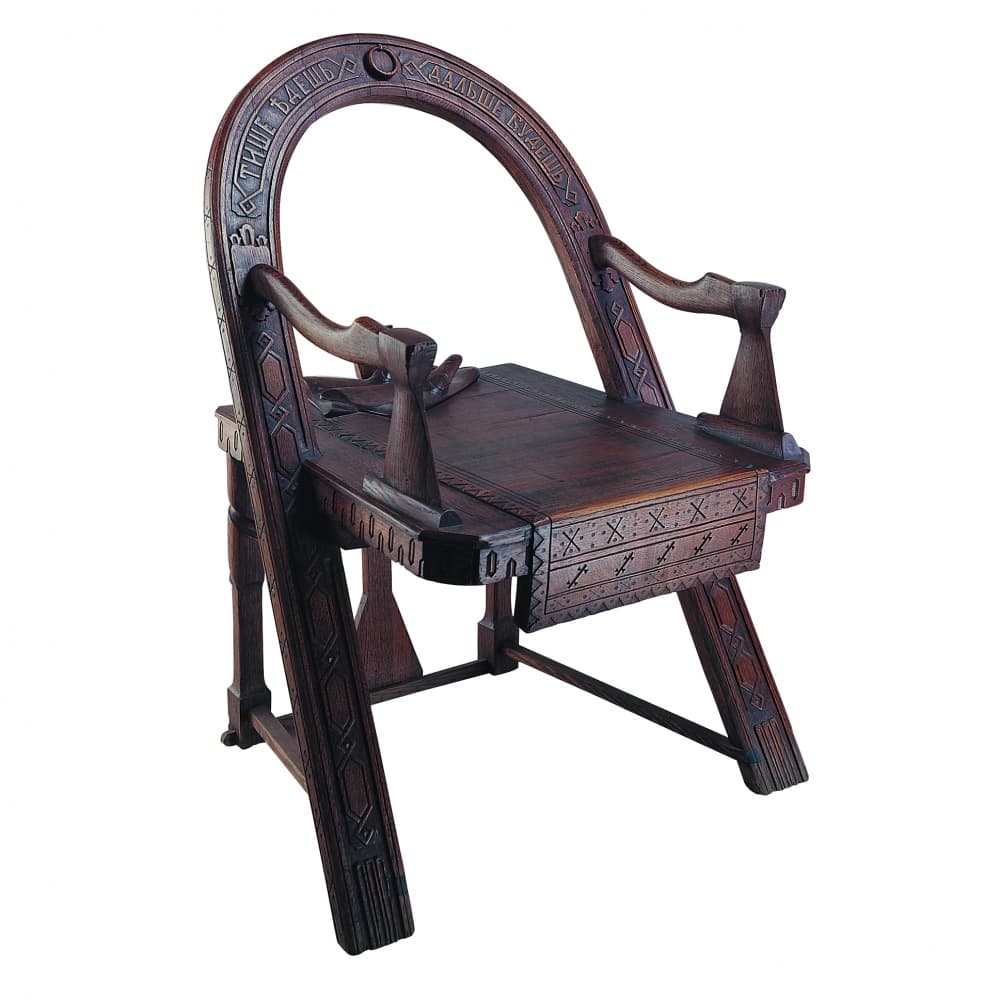 ARMCHAIR "THE QUIETER YOU RIDE THE FARTHER YOU'LL BE" ("ARC, AXES, MITTEN") 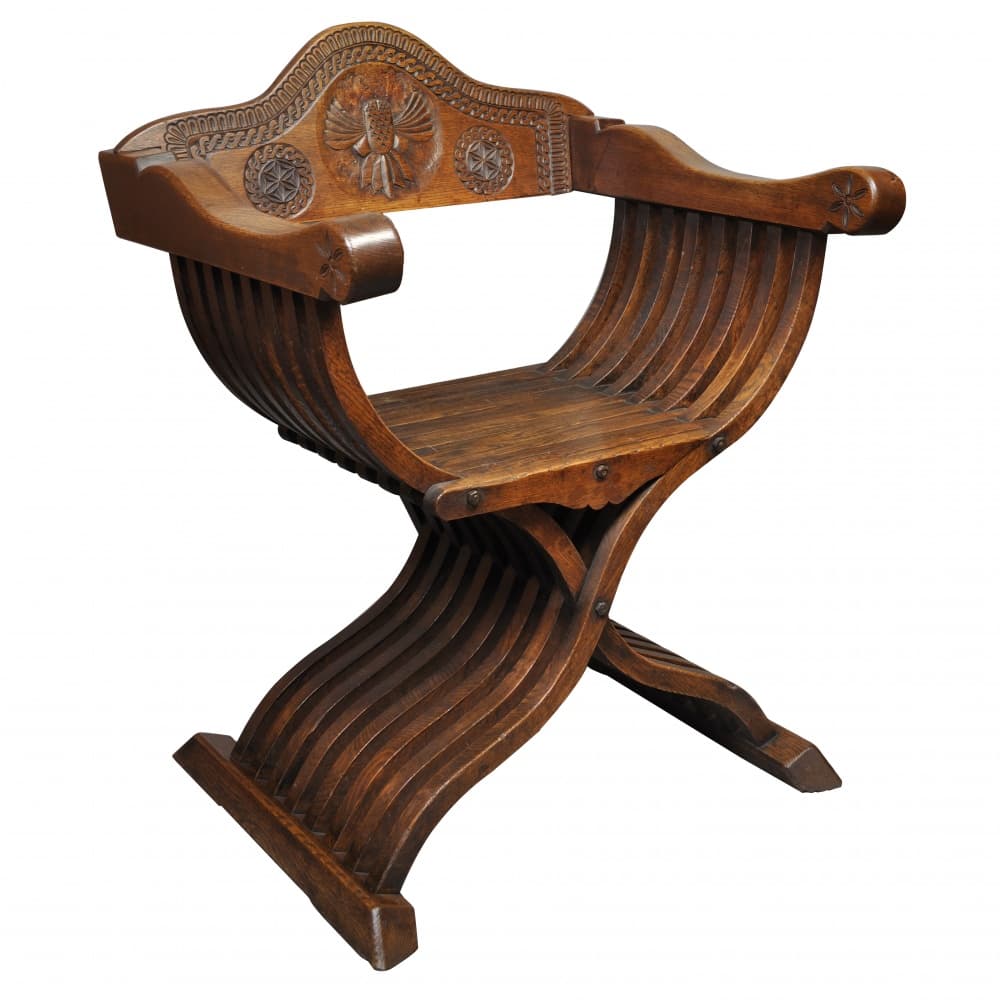 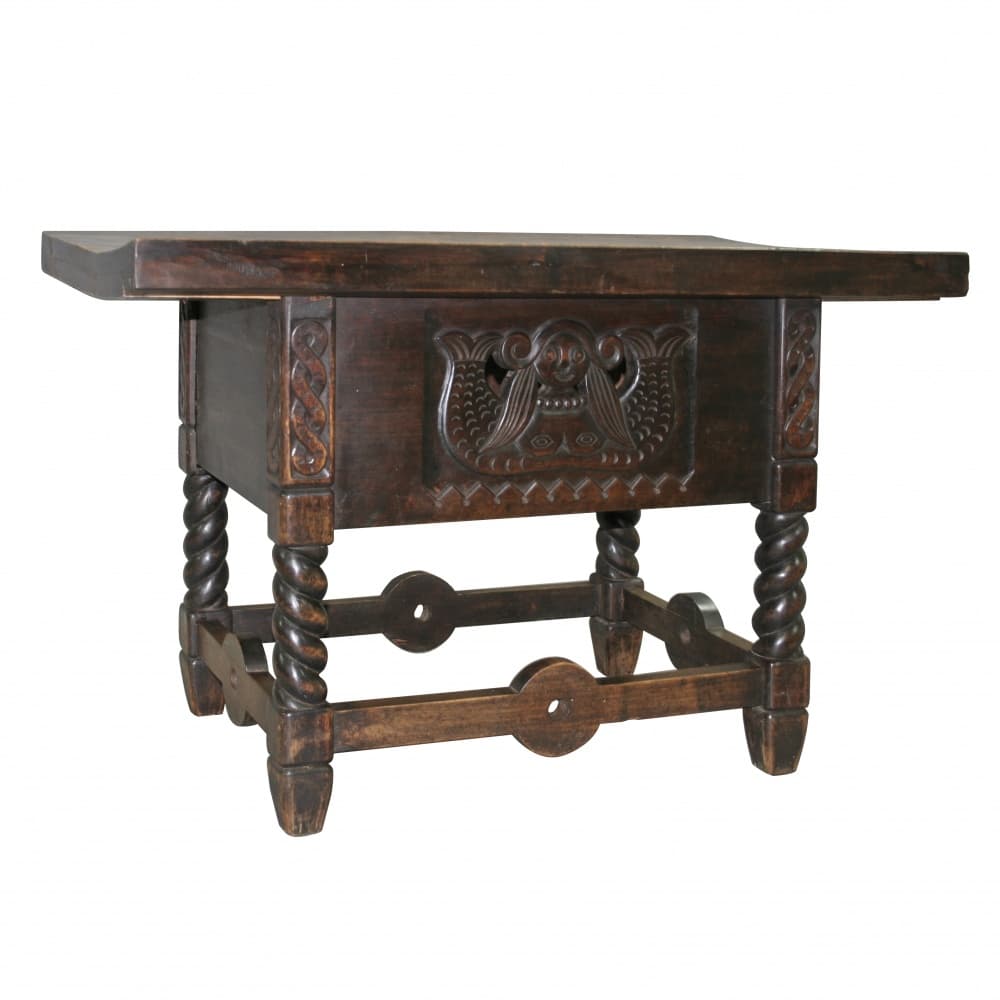 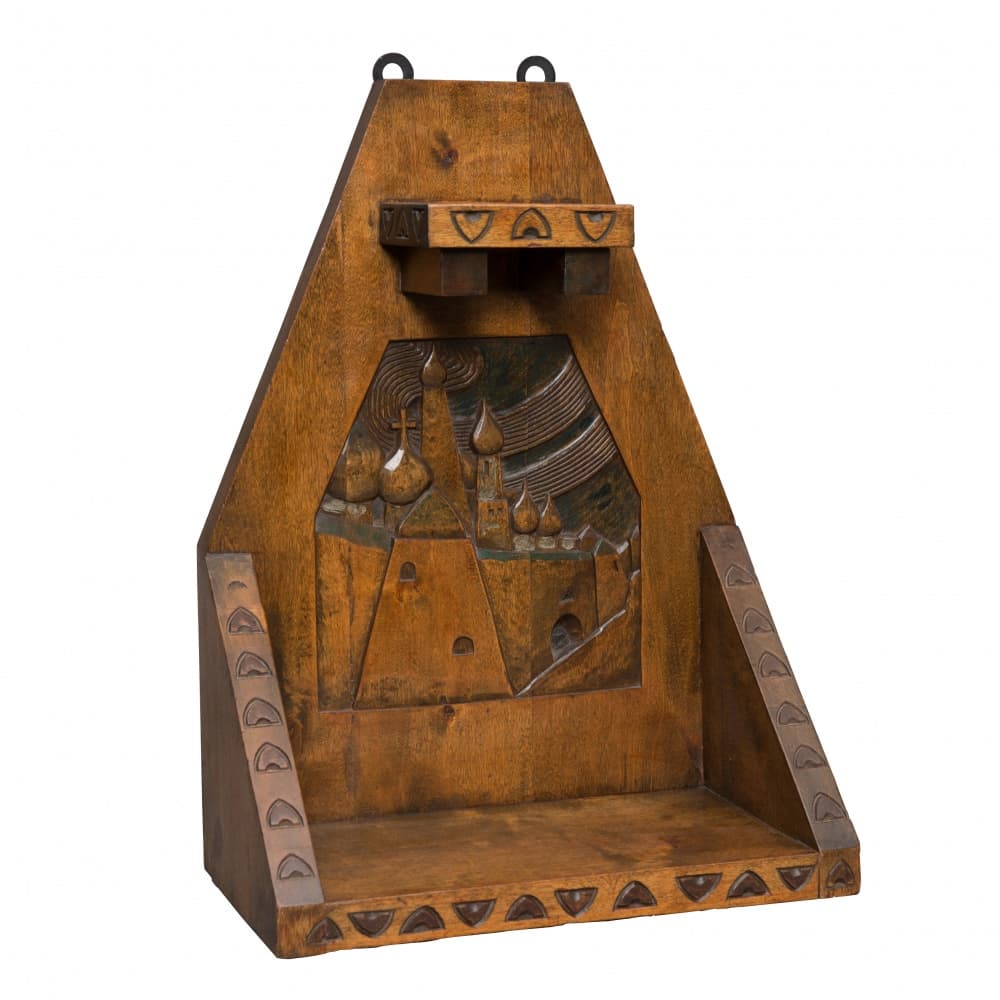 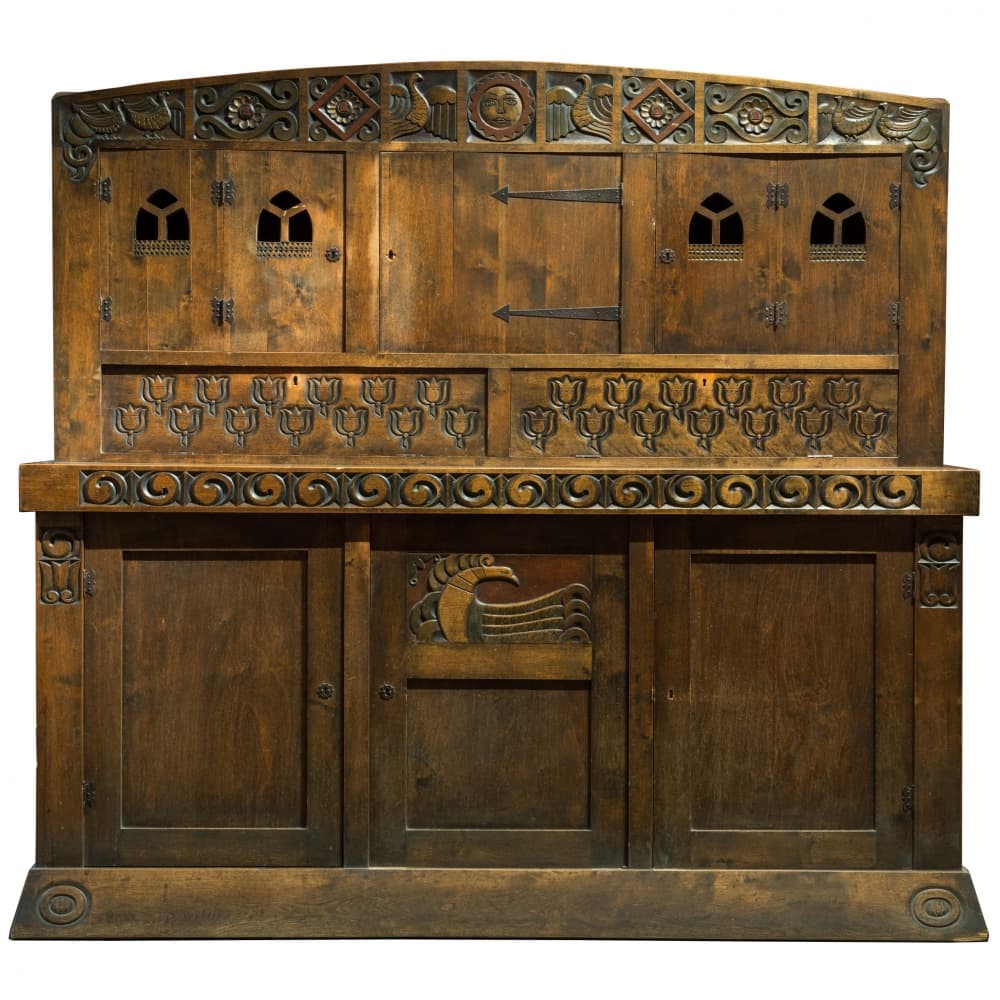 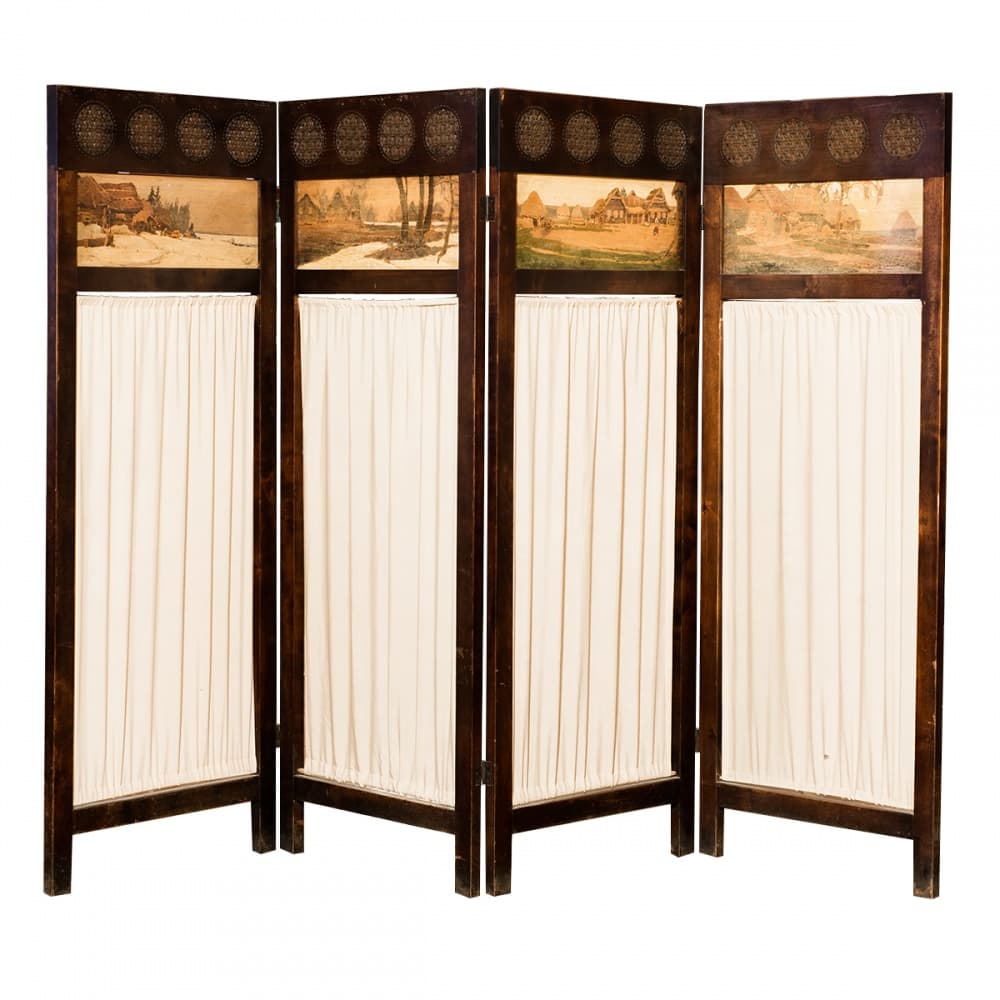 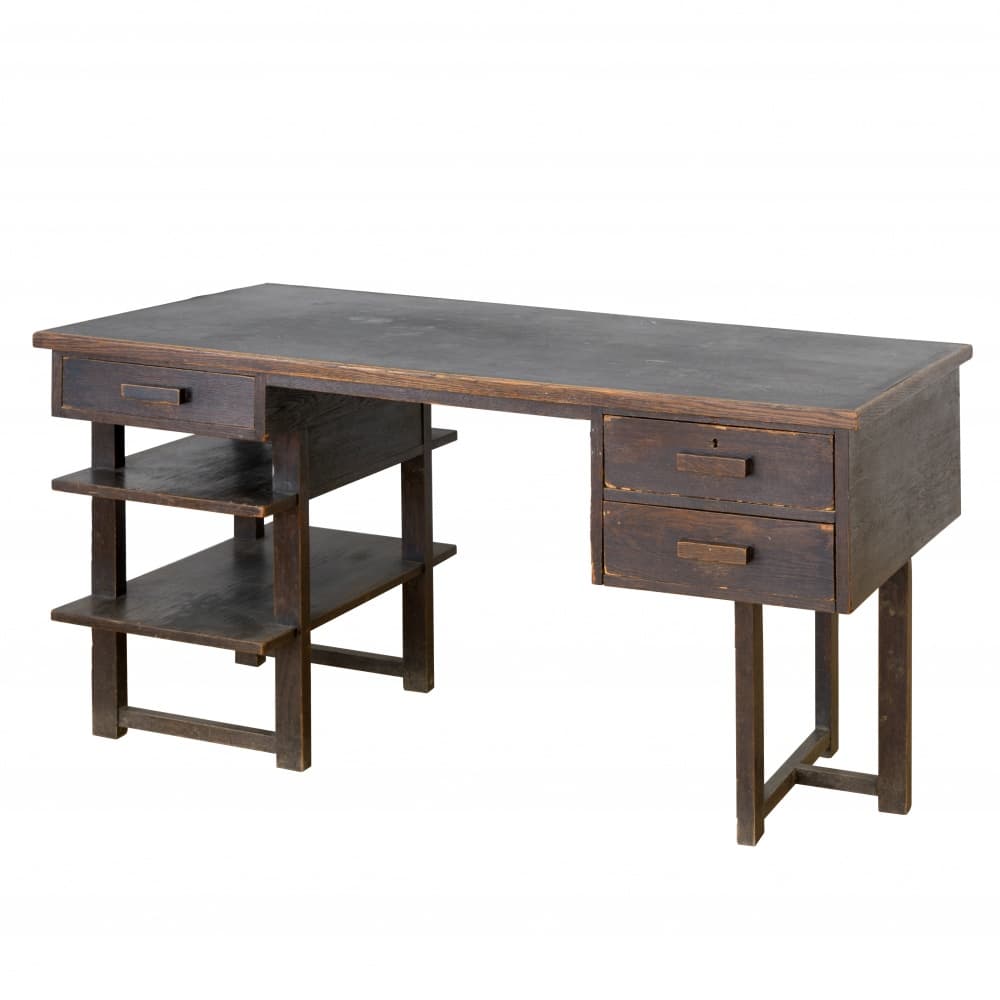 DESK
Feedback
Thanks! We have received your request and will contact you as soon as possible