The collection of wood and birchbark carving and painting is one of the most impressive in the department's collection, with over 5,000 items. The chronological range of the collection extends from the early 19th century to the present. Most of the objects are produced in the north of the European part of Russia as well as in the Nizhniy Novgorod and Kirov regions. The traditions of artistic processing of wood and birch bark in these regions are very diverse both in terms of technology and coloristic solution.


The traditional Severodvinsk painting has a white background, with ornaments in a red-yellow-green colour scheme. Typical decorative elements and techniques, distinguishing paintings of the Russian North, have been preserved in the works of masters to this day. Despite the laconism of the colour palette, paintings on objects are very harmonious in their colouring.

Another well-known craft of the region is birch bark processing. As early as the XVIII century artisans in the Kholmogory and Veliky Ustyug districts made caskets and gloveboxes, decorated with carved birchbark plates. Such craftsmen from the village of Kurovo-Navolok on the Shemoksa River and its suburbs were especially successful; the lacy openwork birchbark cuttings were called Shemogodskaya in the second half of the 19th century. Among the main motifs of the pattern is a flowing plant shoot with spiral scrolls and rosettes, giving an unusual variety of patterns. The Museum's collection presents a rich assortment of the craft, including bowls, caskets, dolls and paper holders. We are particularly proud of the collection's rare pieces from the 1920s, where the traditional openwork ornament features elements of the new era - the hammer and sickle.

Another region that has become home to a great variety of crafts is Nizhny Novgorod region. The most remarkable of these are related to wood-painting. Khokhloma painting originated in the villages on the Uzola River. The craft got its name from the trade village Khokhloma, where craftsmen brought their products. Researchers link the technique, which allows to achieve the effect of gold without the use of gold, with icon-painters and attribute it to the 17th century. The main technique of the Khokhloma masters is to apply silver powder and varnish on objects, which acquires a golden hue after heating in a furnace. This creates a recognizable floral pattern. The museum's collection presents the development of the Khokhloma craft in its entirety - over 2,000 different works.

The craft of Gorodets painting dates back over a century and a half. Originally, craftsmen from Gorodets and the surrounding villages were known as carvers. As the trade grew, however, the focus gradually shifted from decorative carving and inlaying to distinctive painting with bright colours. The favourite subjects of Gorodets painting include festive scenes, tea-drinking parties in combination with large pictures of flowers. They can be found on the spinning wheel bottoms, boxes, trunks, and numerous decorative panels.

A special craft was developed in Vyatka, where burl-root (growths on the roots of deciduous trees, mainly birch) were used to make objects. Caskets and snuff-boxes on wooden hinges are distinguished by fine carpentry and an unusually beautiful iridescent surface texture. The museum's collection also includes truly unique pieces of craftsmanship - the Bronnikovs' clocks, with mechanism made entirely of burl, S.A. Kushov's chess, recognised at the 1925 Paris exhibition, and equally amazing miniature chess pieces - no bigger than a grain of rice.

Another centre, whose trademark has been the use of unpainted wood, is located in the village of Bogorodskoe, near Sergiev Posad. The famous Bogorodok toy appeared more than two centuries ago and immediately became extremely popular, largely due to the diversity and accuracy of the artistic images. The All-Russian Decorative Art Museum has one of the most significant collections of the Bogorodskaya toys and sculptures. Among the unique examples are multi-figured compositions, created according to lubok plots at the beginning of the 20th century.

Speaking of toys, it is impossible not to mention the world famous matryoshka doll. The doll was recognised by the public almost immediately at the 1900 Paris World's Fair, setting standards for further artistic endeavours. The museum's pride and joy is one of the variants of the famous 'Girl with a Rooster', the first Russian matryoshka doll painted by the artist Sergei Vassilyevich Malyutin (1859-1937).

The accumulated woodworking techniques enabled craftsmen in Nizhny Novgorod region to start producing matryoshkas, first in Merino and then in Semyonov. The painting was done with bright aniline colours on a yellow background with a black outline. Semyonov matryoshkas were traditionally painted with large fancy red or pink flowers, surrounded by buds, berries and leaves, while matryoshkas were traditionally dressed in a shirt, sundress, apron and kerchief.

Over time, matryoshkas began to be made across the country.

A separate layer of objects in the museum collection is represented by experimental works created by masters of various crafts with the assistance of specialists from the, who worked extensively during the second half of the 20th century to broaden the variety of artisanal crafts.

In recent years the collection of artistic crafts has been expanded by brightly coloured works by masters of wooden toys and sculptures - S.F. Sokolov, Y.V. Arshinov, A.N. Varganov and others. 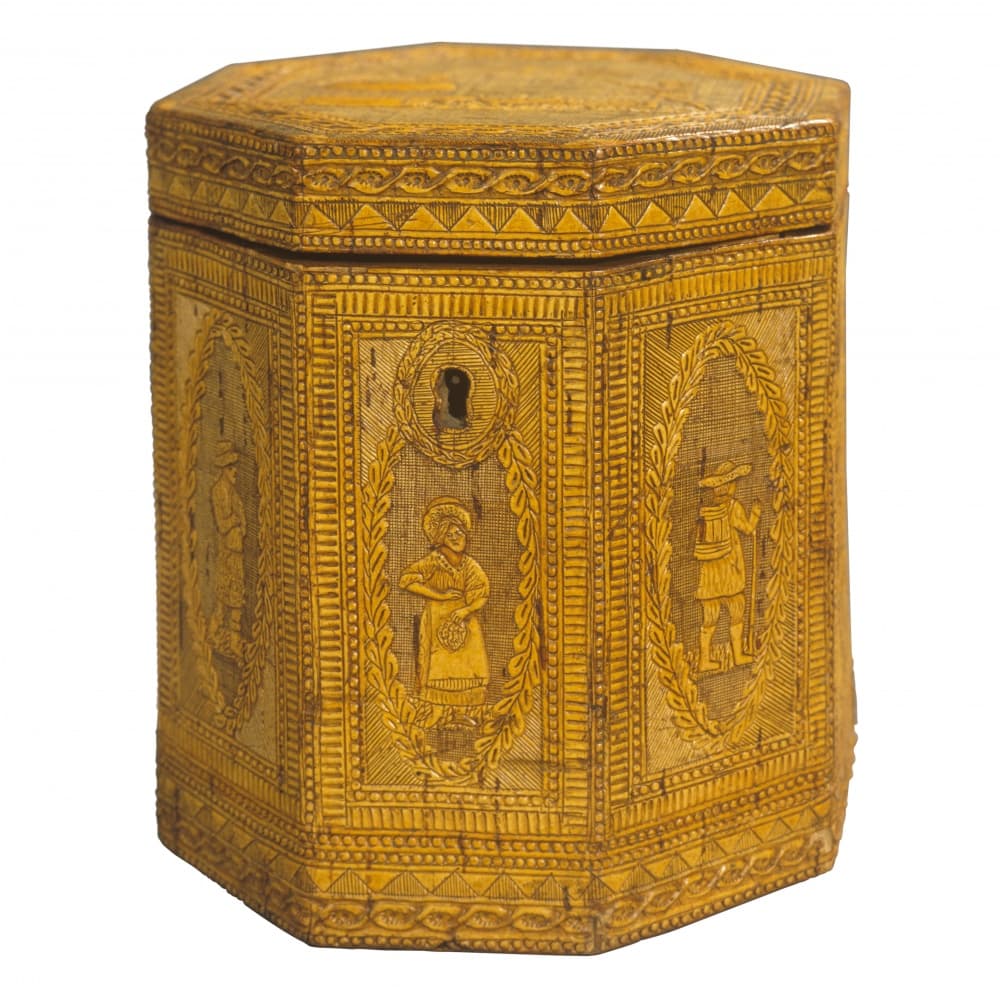 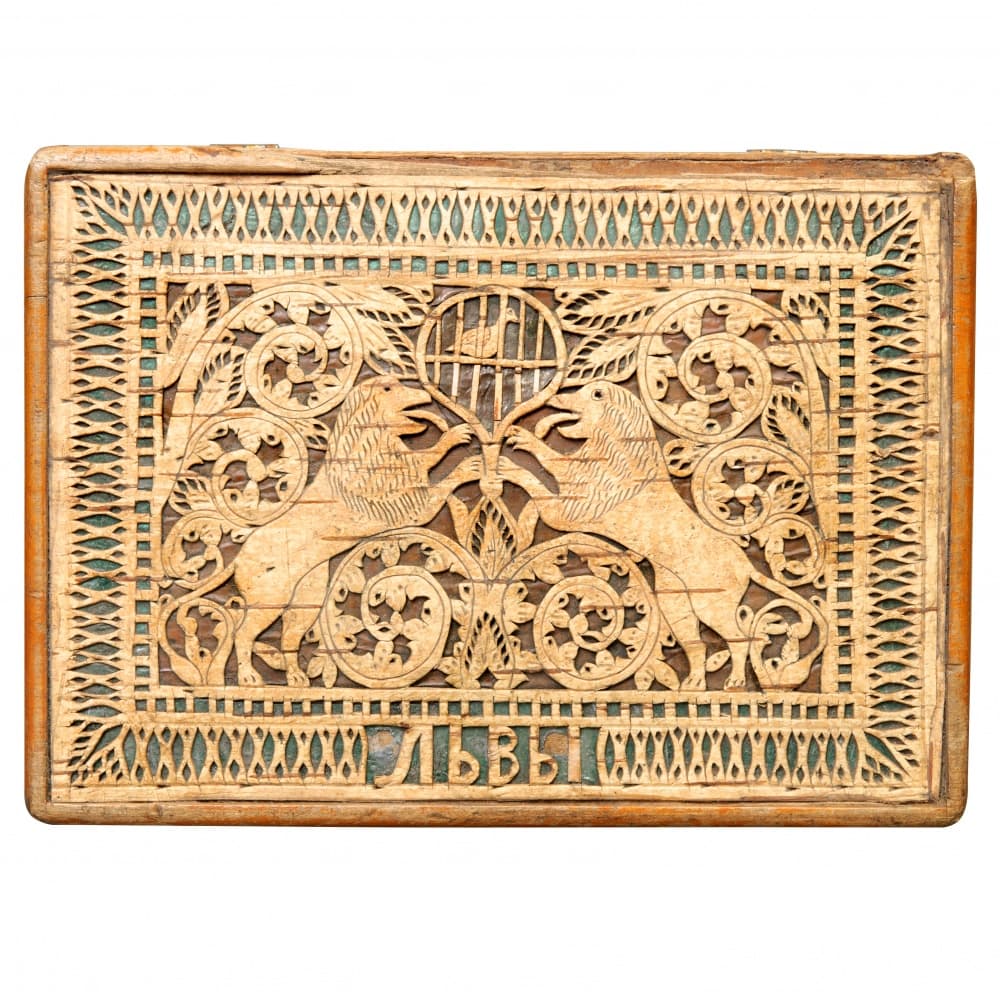 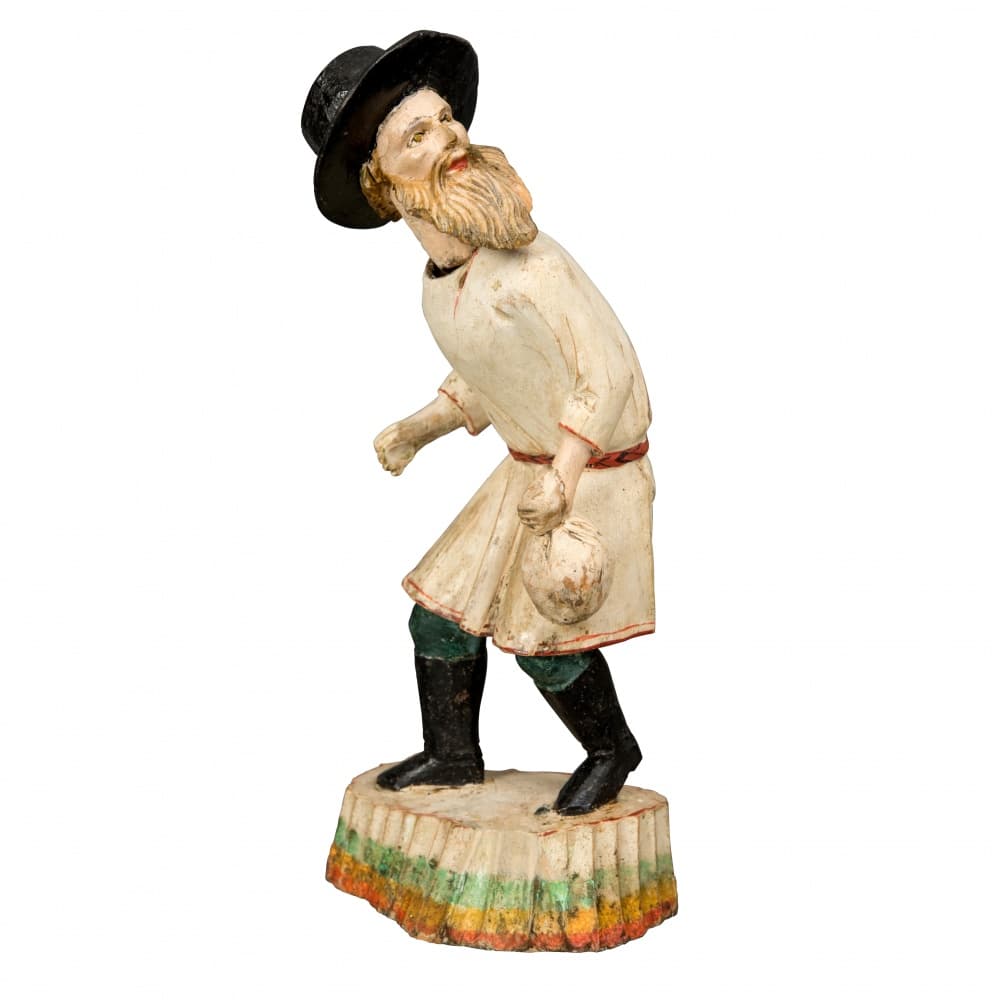 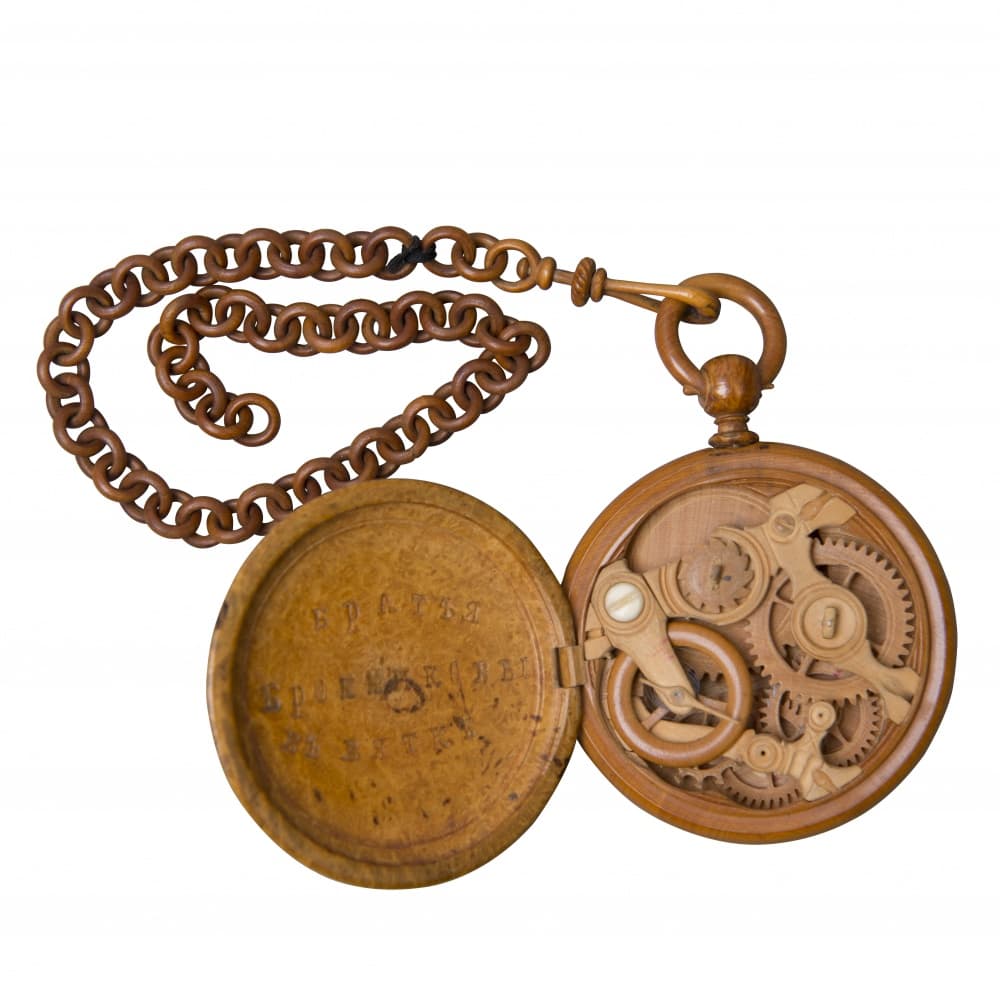 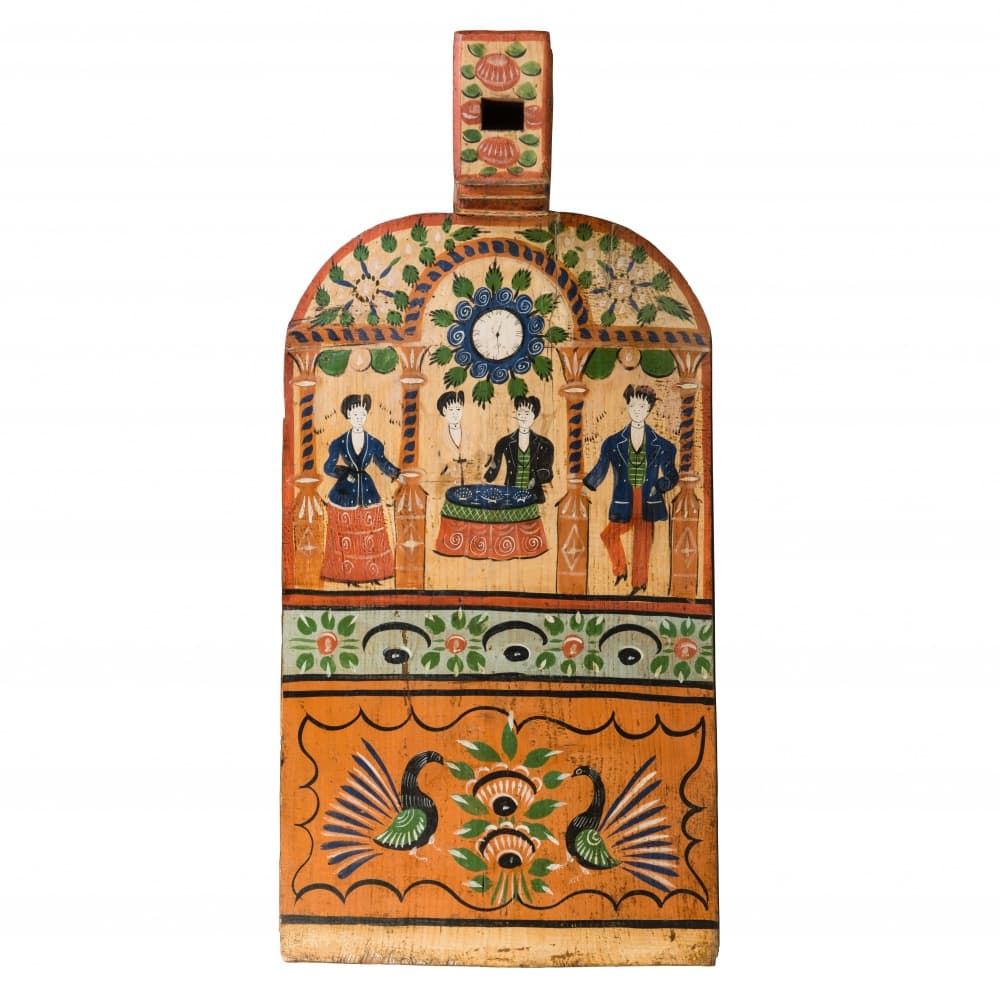 BOTTOM OF THE SPINNING WHEEL

SCULPTURAL COMPOSITION "BATTLE WITH THE CENTAUR" 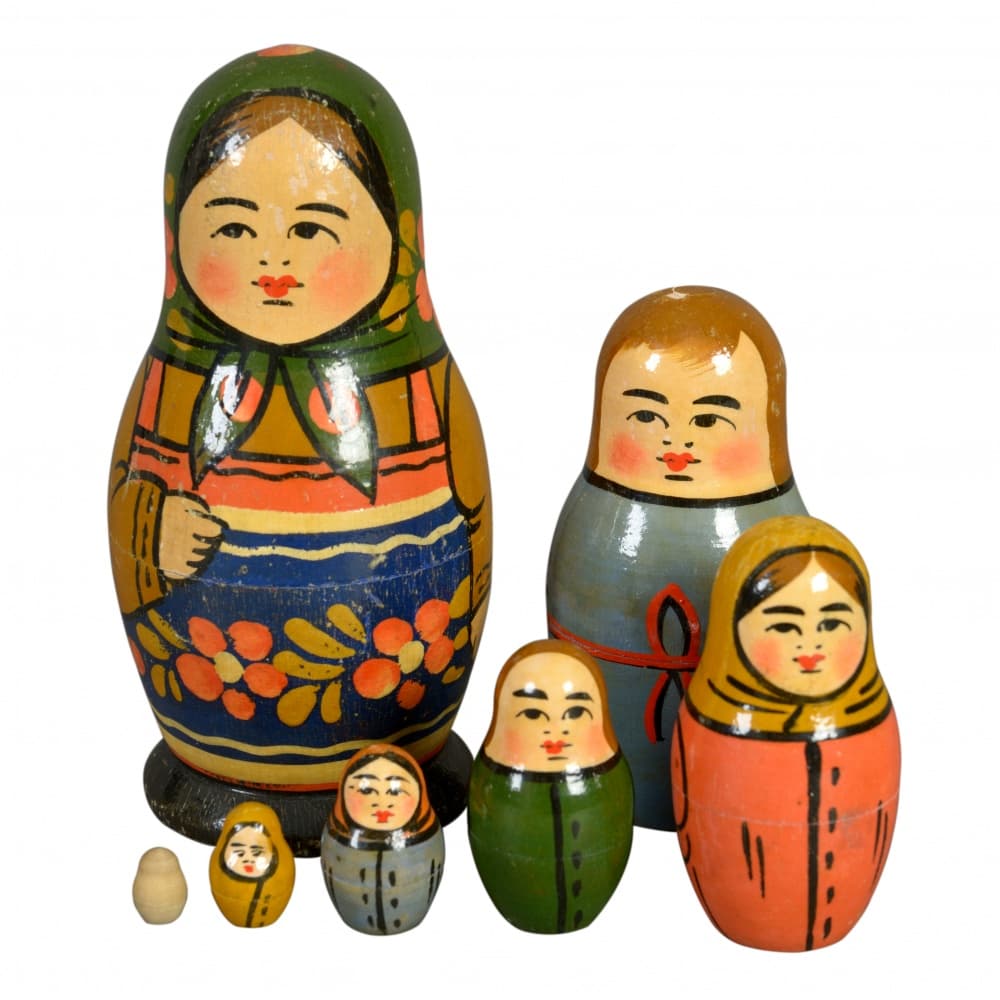 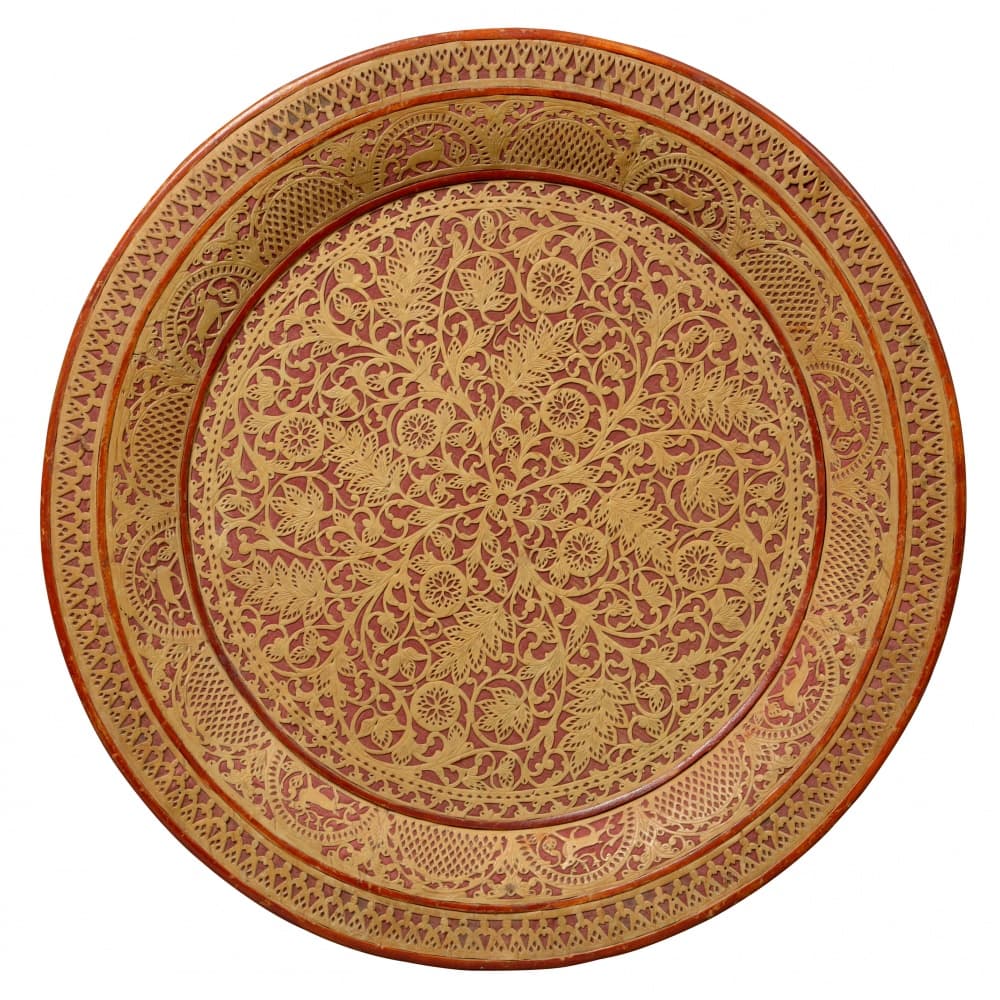 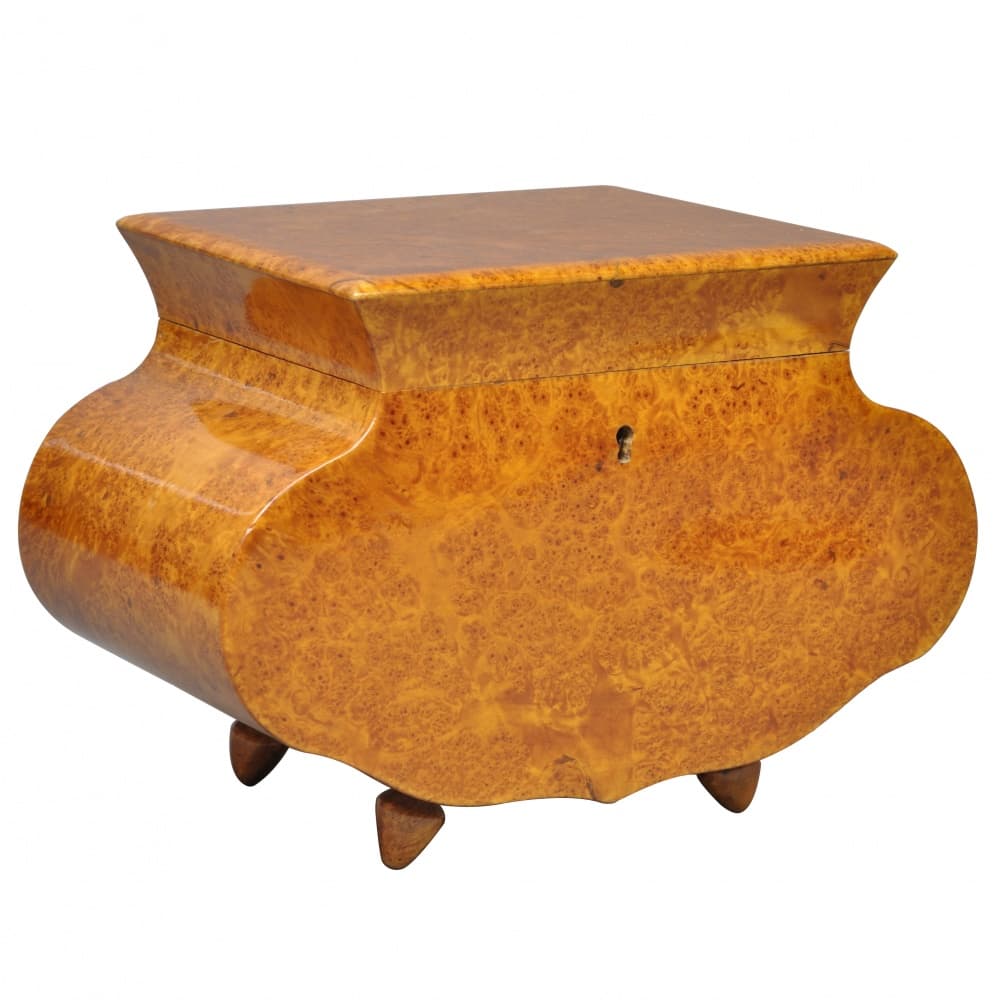 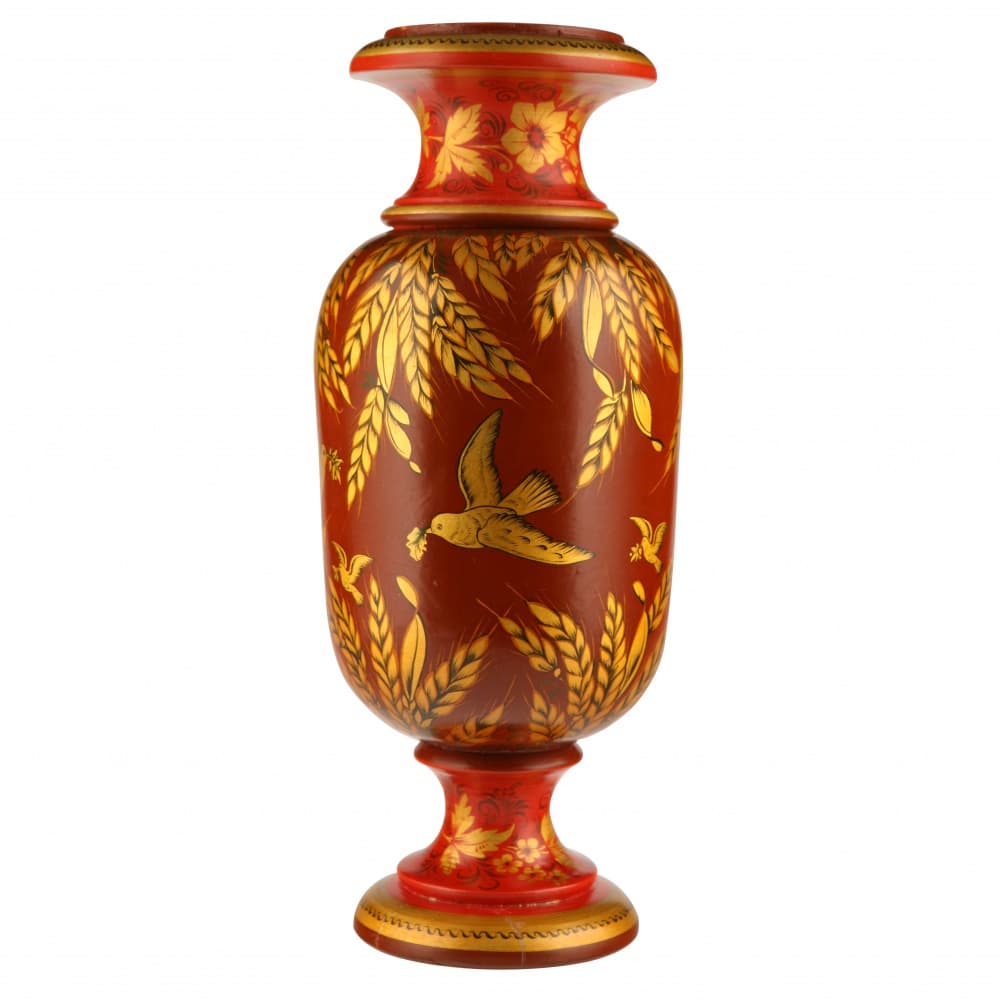 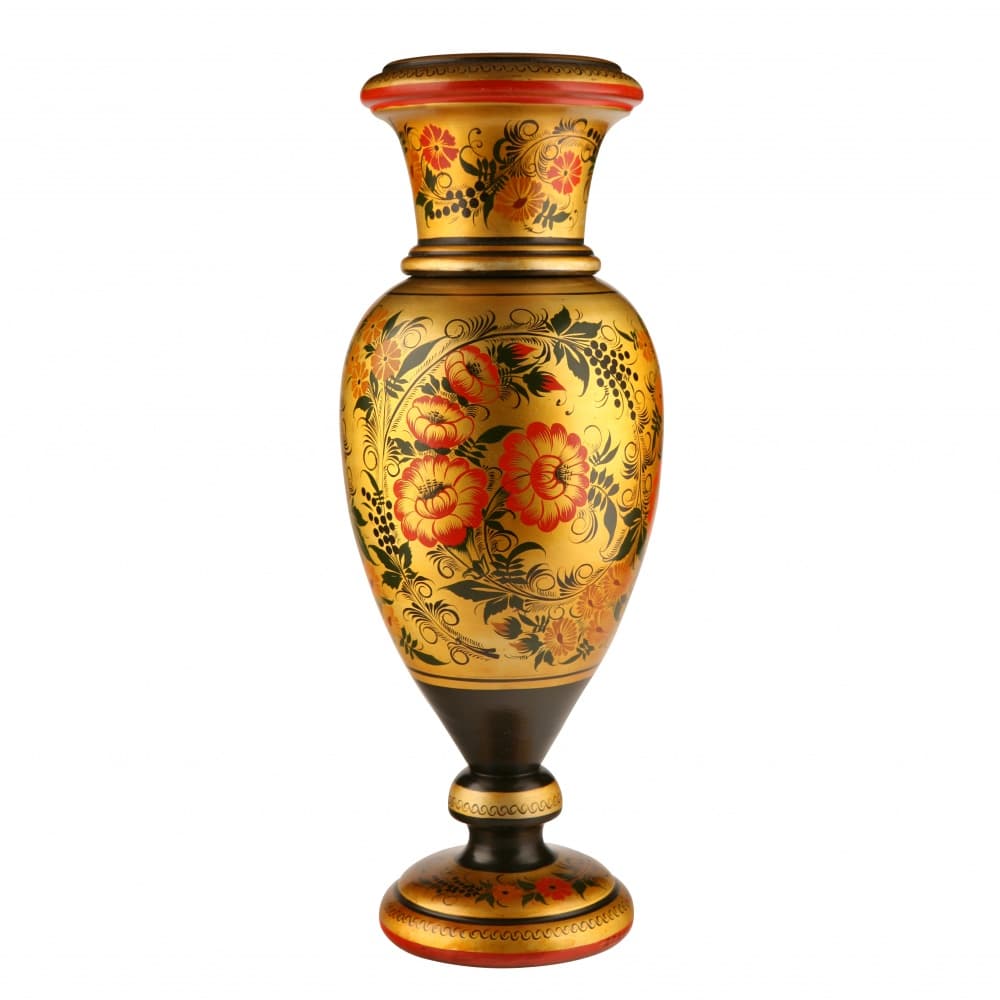 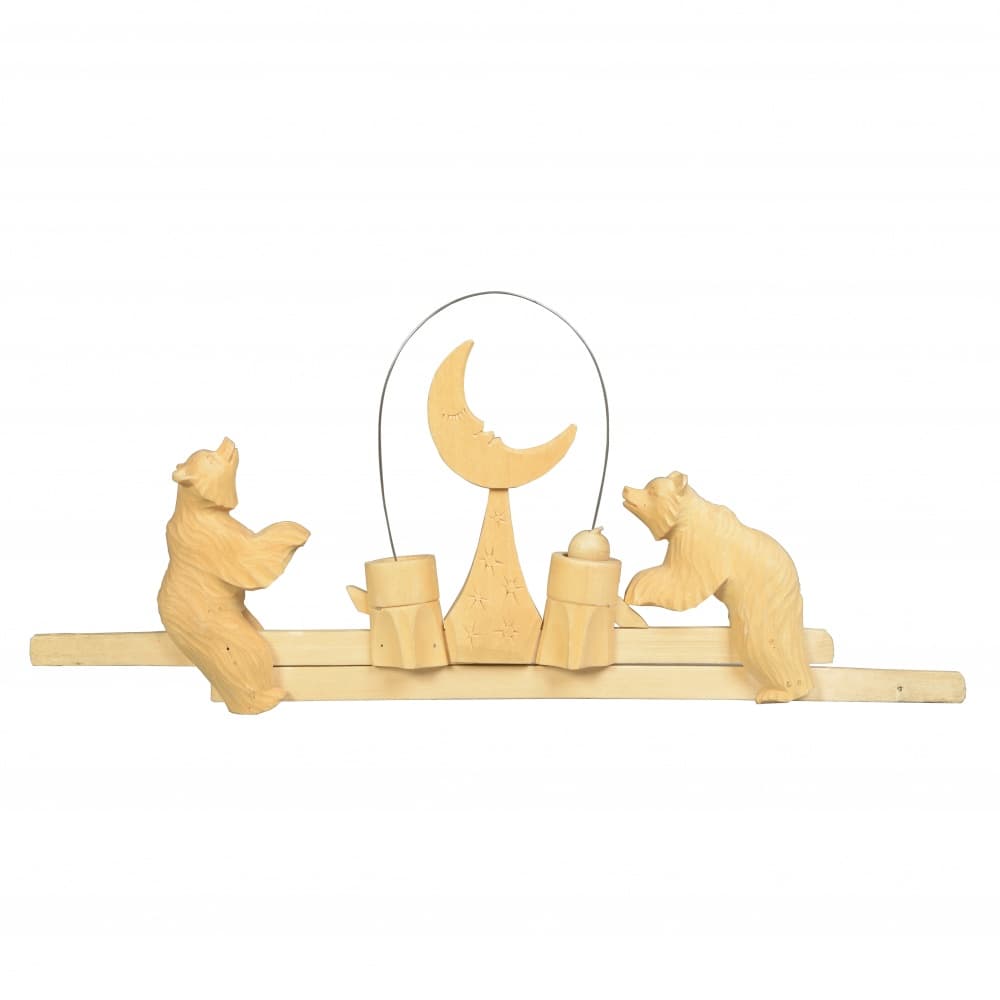 TOY WITH MOTION "AROUND THE MOON" 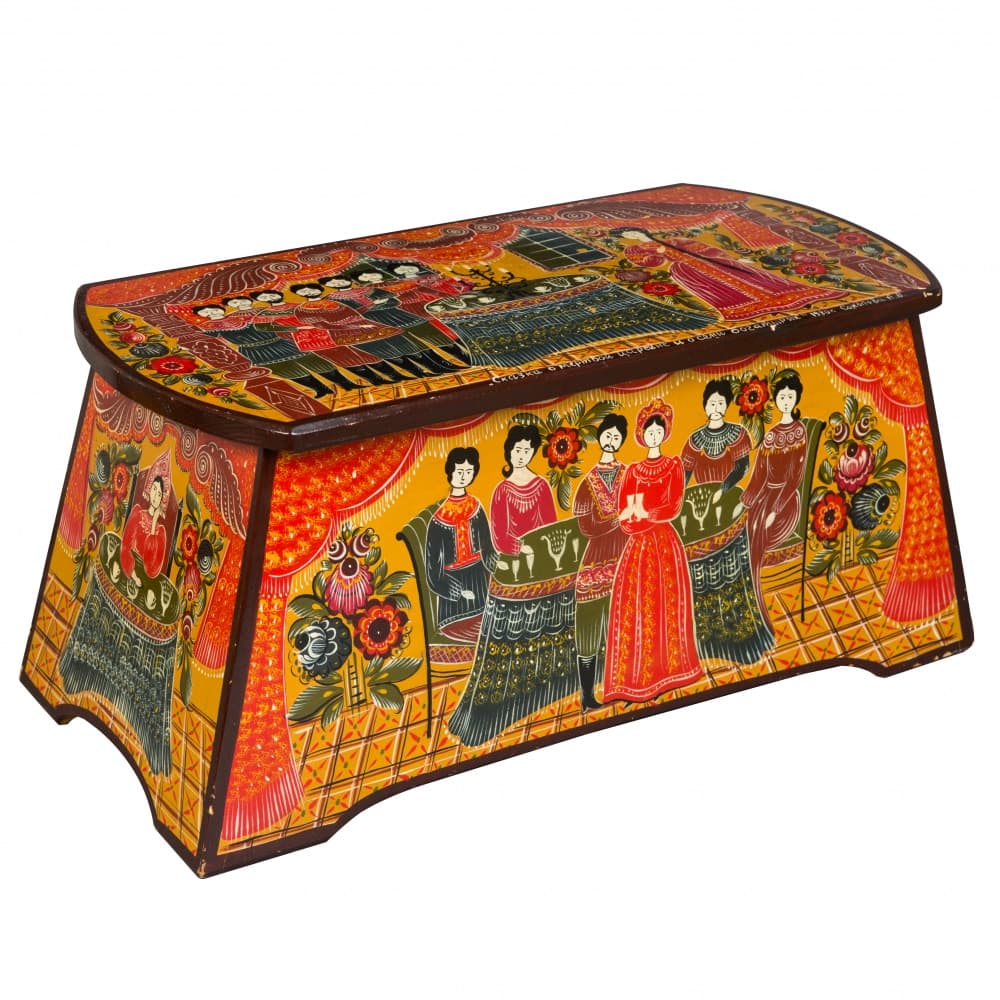 CASKET "THE TALE OF THE DEAD TSAREVNA AND THE SEVEN KNIGHTS" 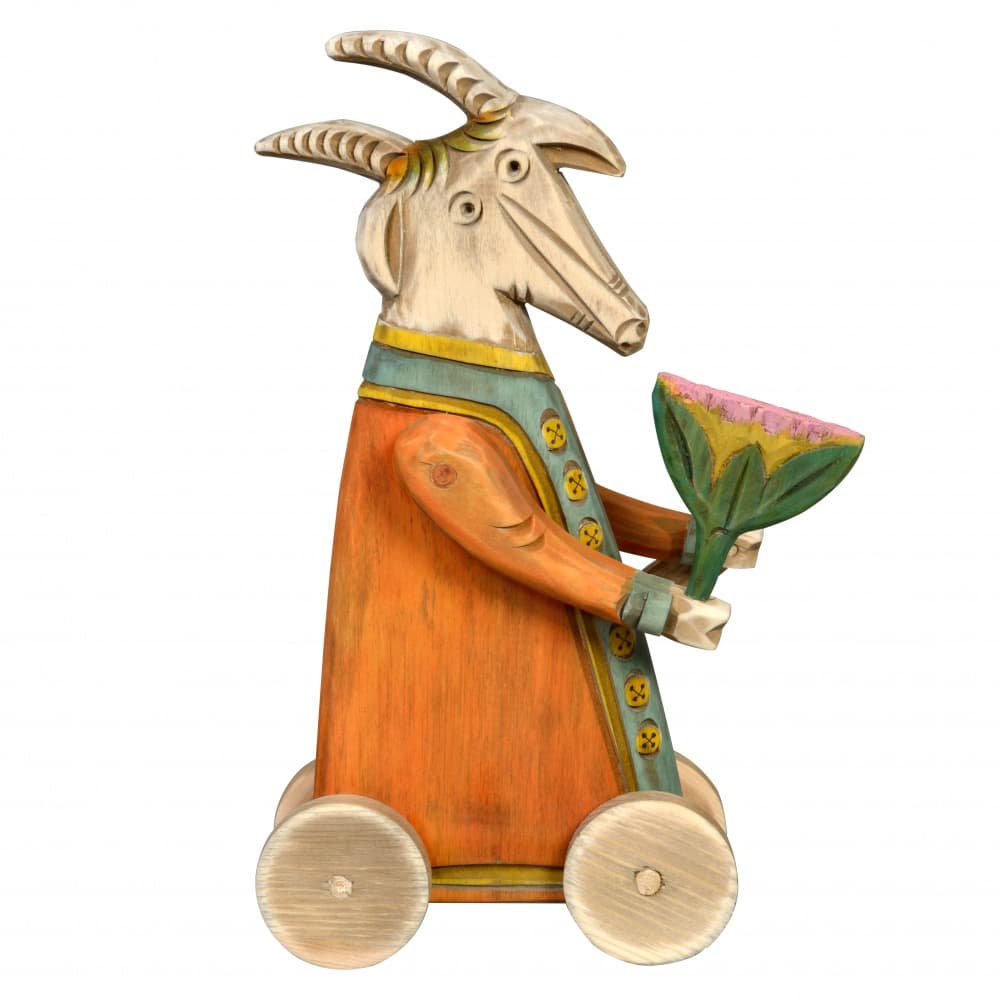 MOVING TOY "GOAT"
Feedback
Thanks! We have received your request and will contact you as soon as possible