One of the most interesting sections of the Museum's collection are works by the Artisanal Museum artists of the 1920s. This period was marked by revolutionary romanticism and the renewal of many spheres of public life. The Moscow Artisanal Museum was not spared from those processes.


The work on renewal and actualization of the assortment of handicraft items started in the early 1920s. Its main purpose was to preserve and give a new impulse to the activity of traditional art and craft centres whose products could not compete with the factory ones and were disappearing from everyday life (wooden ladles, birch bark baskets, etc.). These renewed products, which were no longer utilitarian items and acquired the status of works of art, were displayed for the first time at the First All-Russian Agricultural, Handicraft and Industrial Exhibition in Moscow in 1923. It was followed by the International Exhibition of Decorative and Industrial Arts in Paris in 1925. The success of this exhibition helped to promote artisanal products on the European art market. These shows were of enormous significance and to a large extent determined the development paths of traditional domestic arts and crafts for the next few decades.

Artists who worked in the museum during that period included such outstanding masters as Alexander Nikolaevich (Nilovich) Durnovo (1871 – 1930), Boris Nikolaevich Langhe (1888 – 1969), Evgeny Grigoryevich Telyakovsky (1887 – 1976), Vladimir Mikhailovich Golitsyn (1901 – 1943), Zinaida Dmitrievna Kashkarova (1888 – 1961), Nikolai Georgievich Tikhonov (1892 – 1988), Ivan Ivanovich Oveshkov (1877 – 1942). The artists studied and analysed in depth authentic works of folk and peasant art and used this wealth of centuries-old experience in their works. In the compositions created by them, traditions of Russian lubok are read and traced, the artistic principles of paintings of the Northern Dvina, the Urals and the Volga region, rhythmical and colouristic features of Mezensk spinning wheel decorations are redefined. Some of these artists started working for the Artisanal Museum as early as the 1910s, having been invited by Nikolai Dmitrievich Bartram (1873 – 1931) to join the first group of artists of the Museum. Thus, under the new circumstances, their work was an organic continuation of a pre-revolutionary tradition. 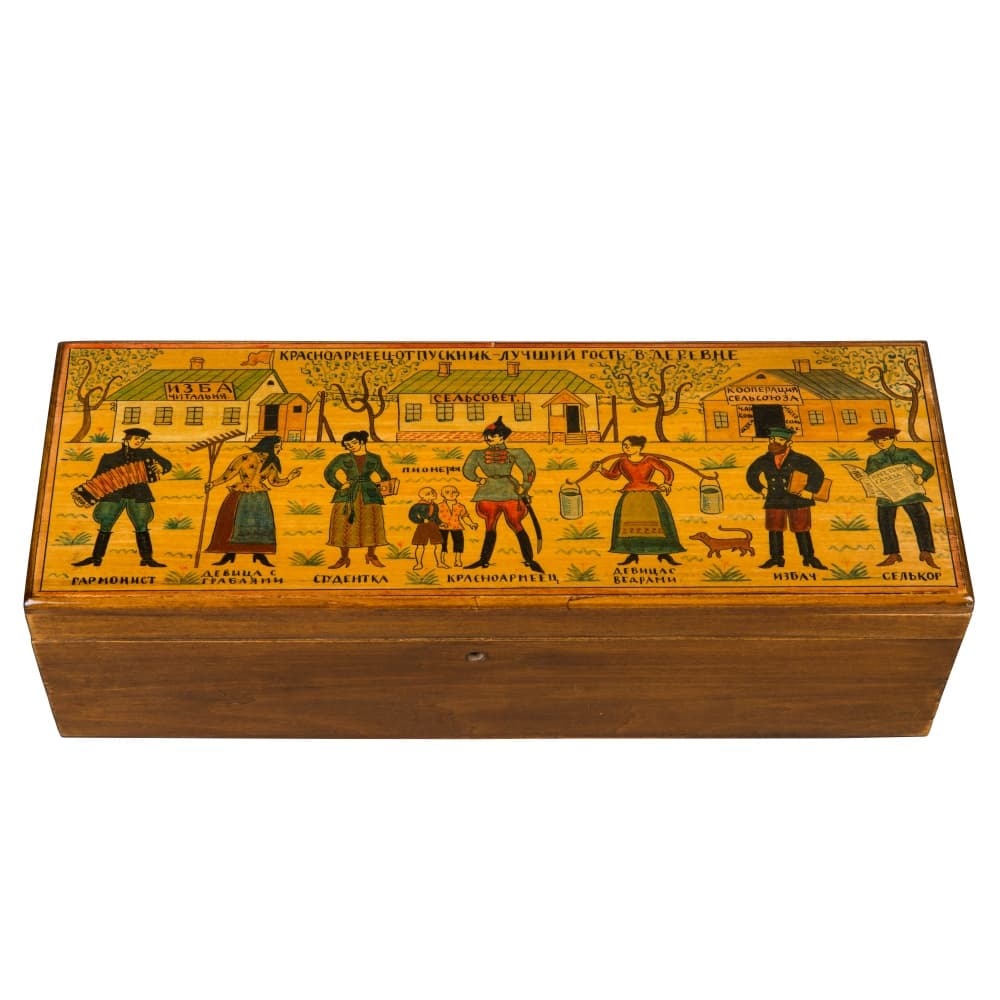 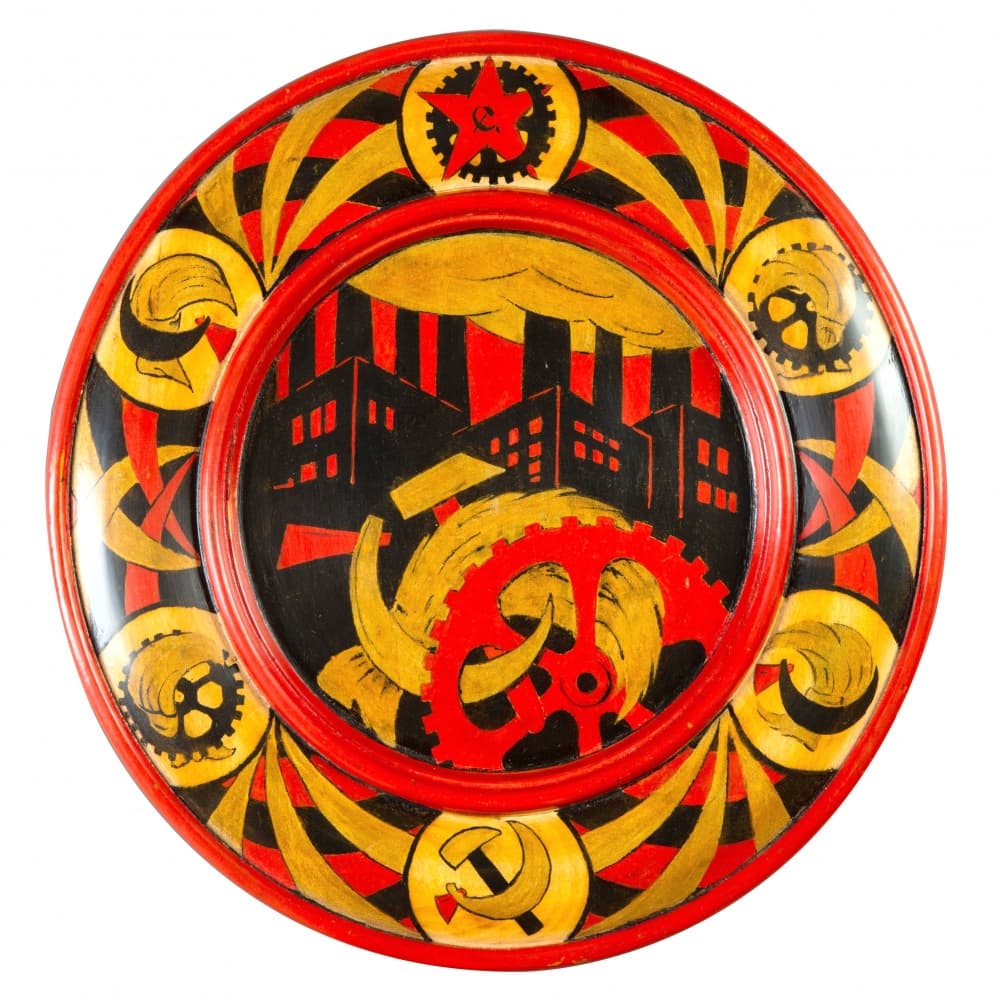 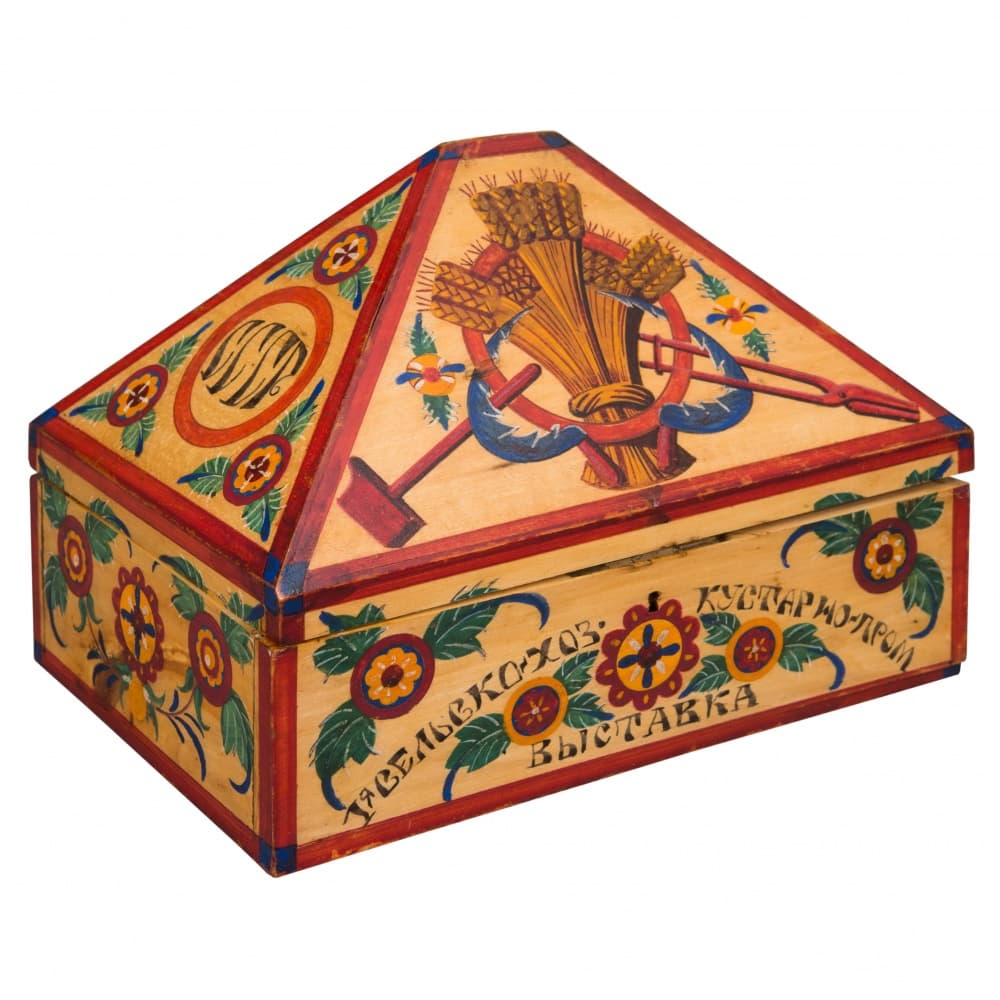 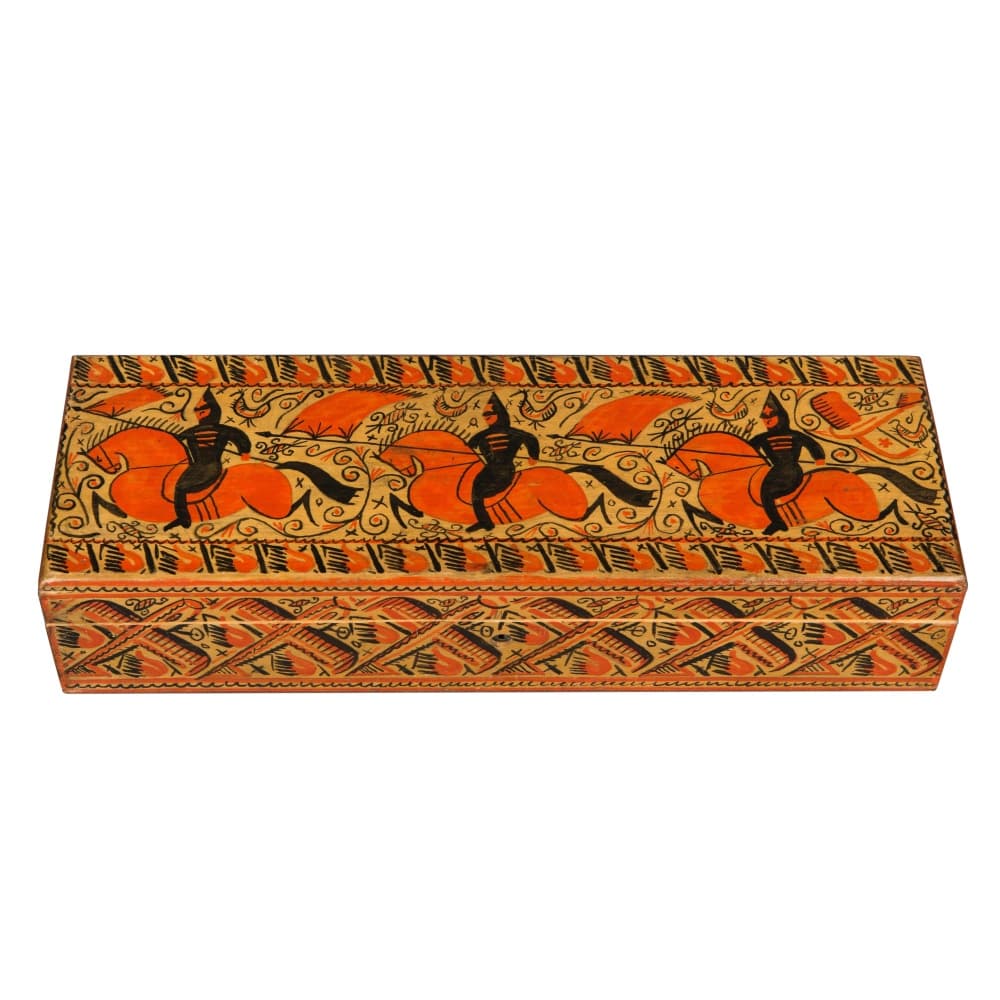 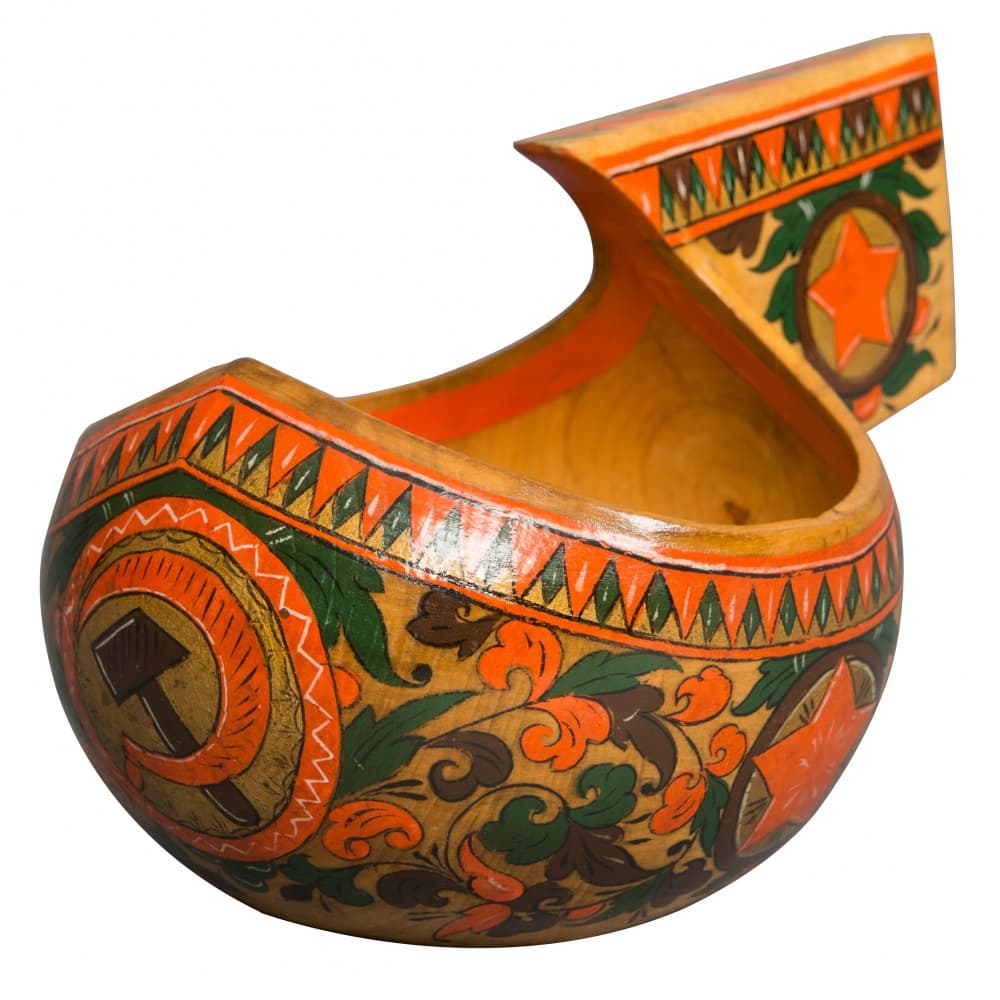 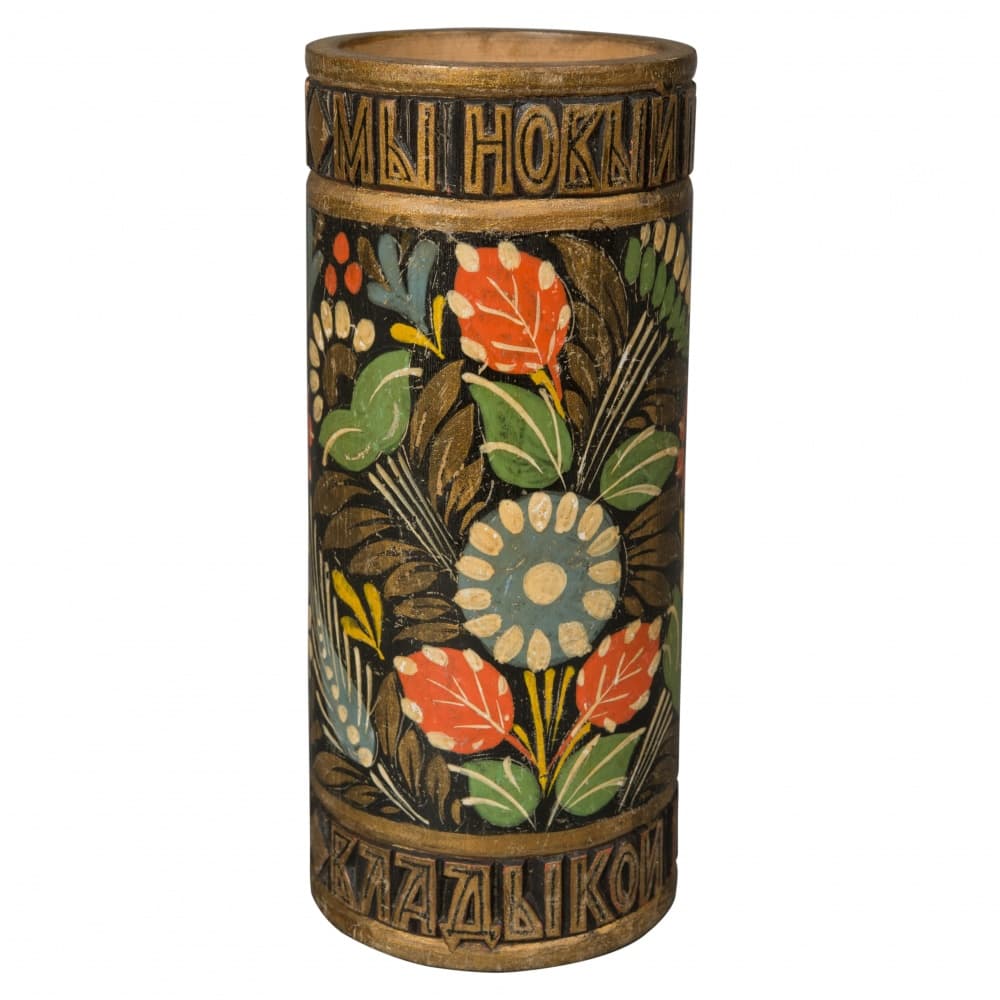 BRUSH BOX WITH THE INSCRIPTION "WE WILL SHOW A NEW WAY TO THE WORLD, HARD WORK WILL BE THE RULER OF THE WORLD" 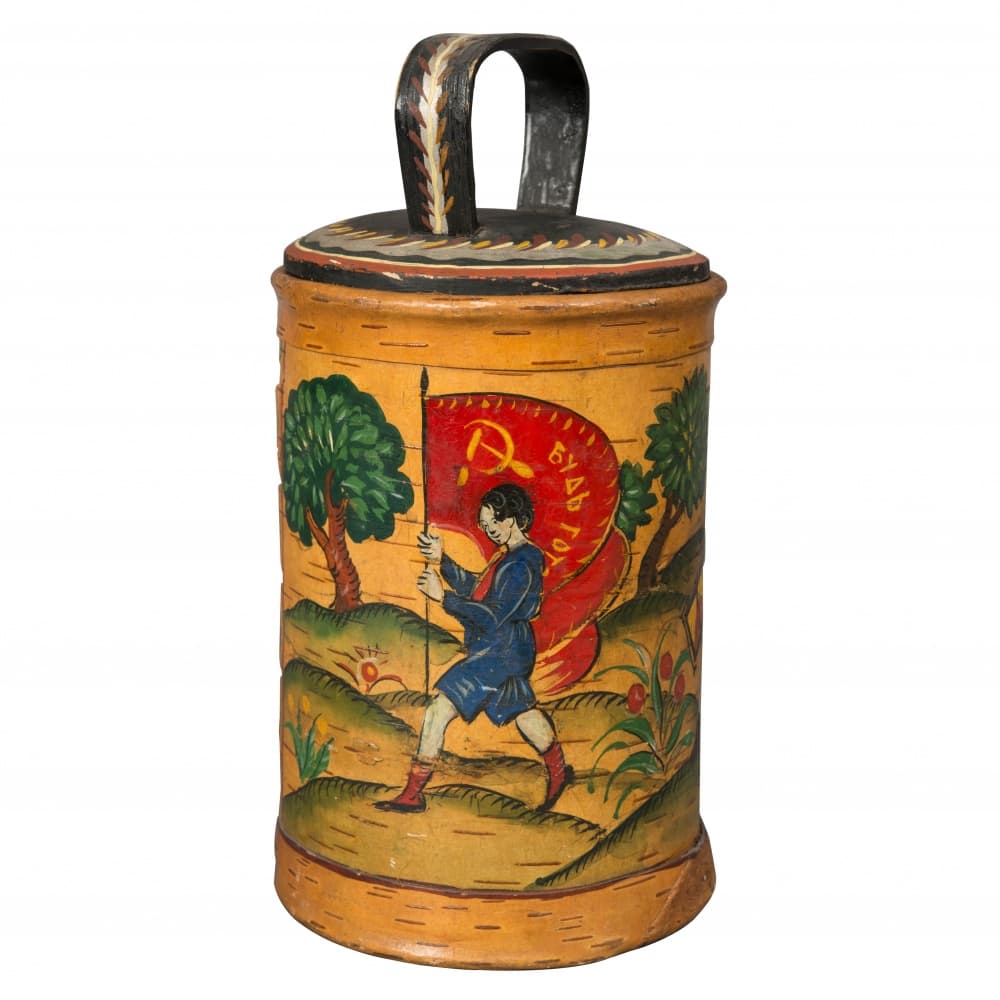 TUES "PIONEERS" WITH A REMOVABLE LID 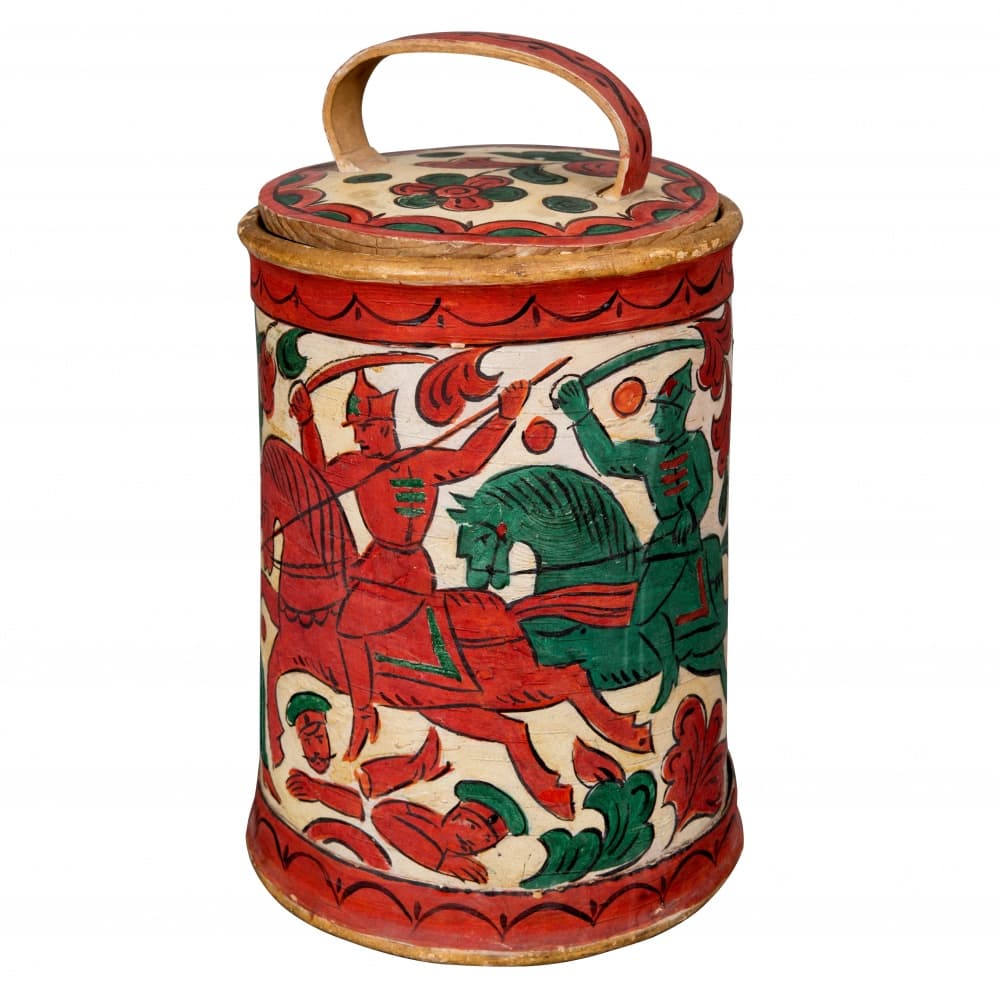 CONTAINER WITH A LID 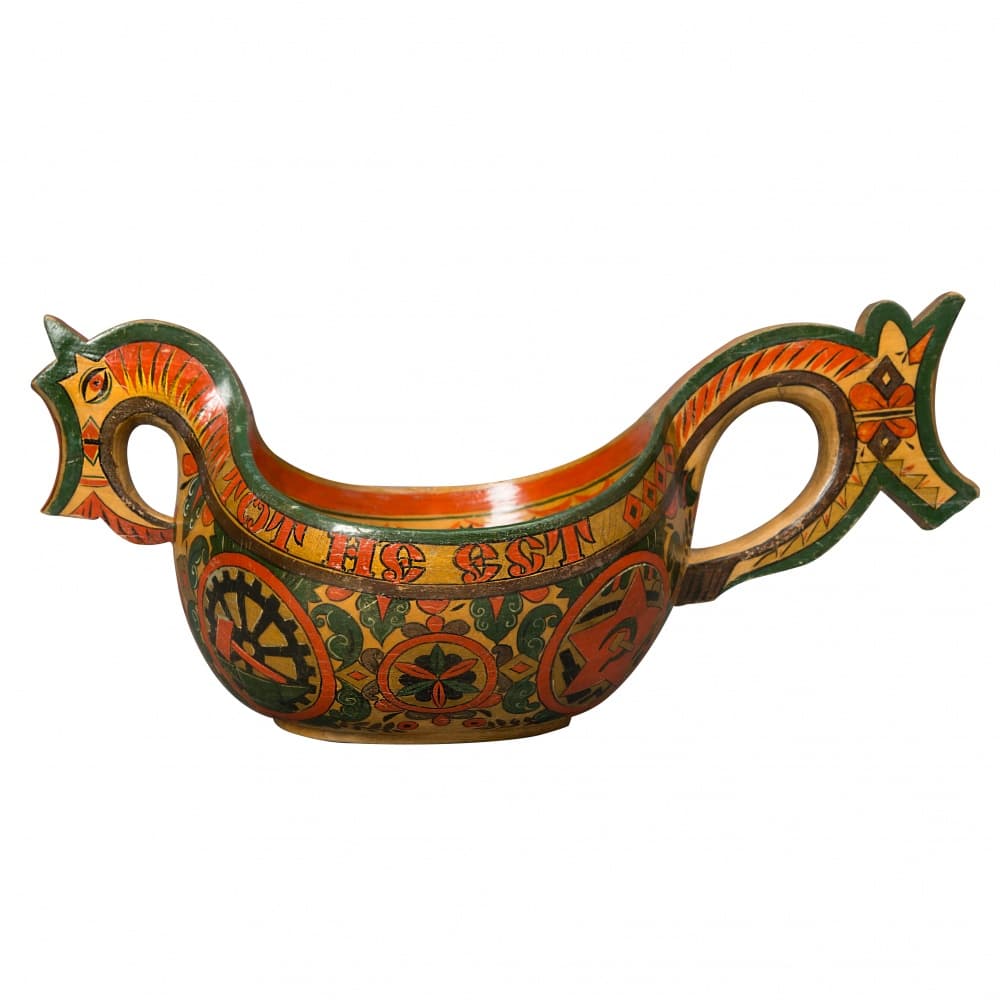 SCRAPING LADLE "HE WHO DOES NOT WORK DOES NOT EAT" 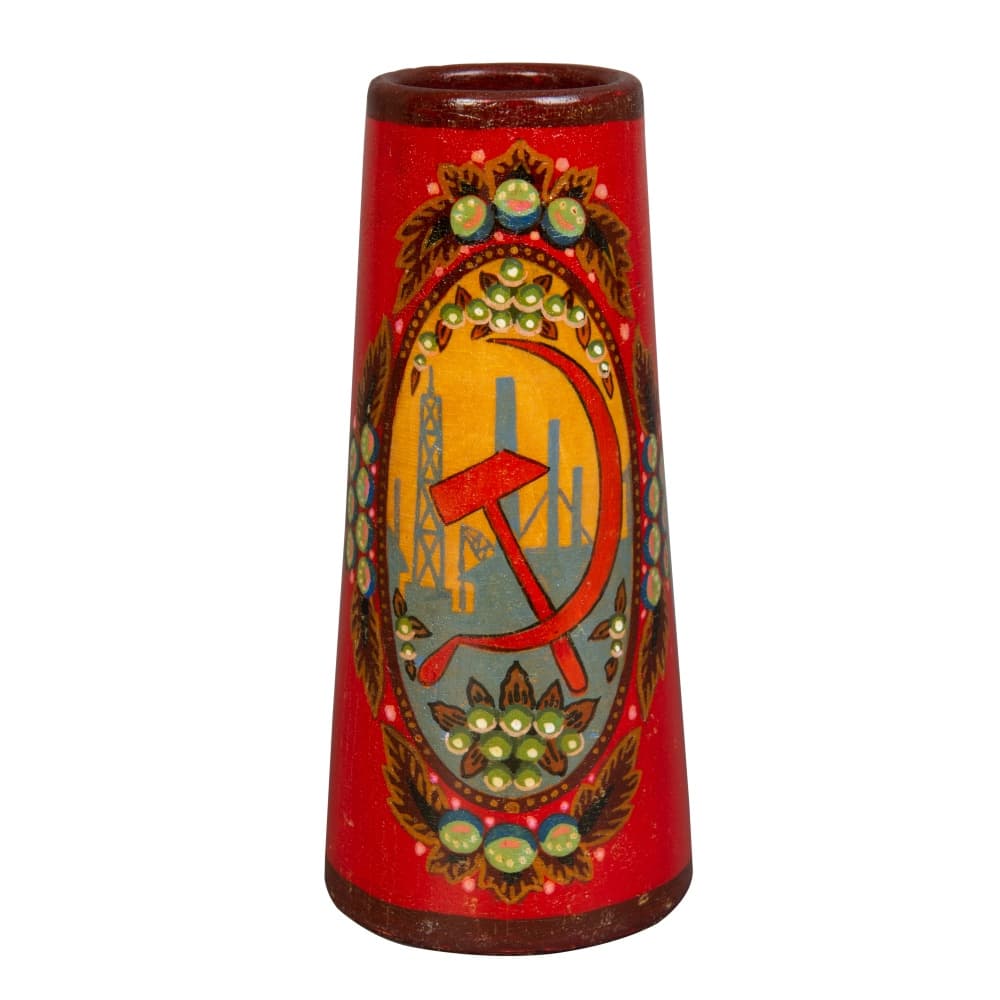 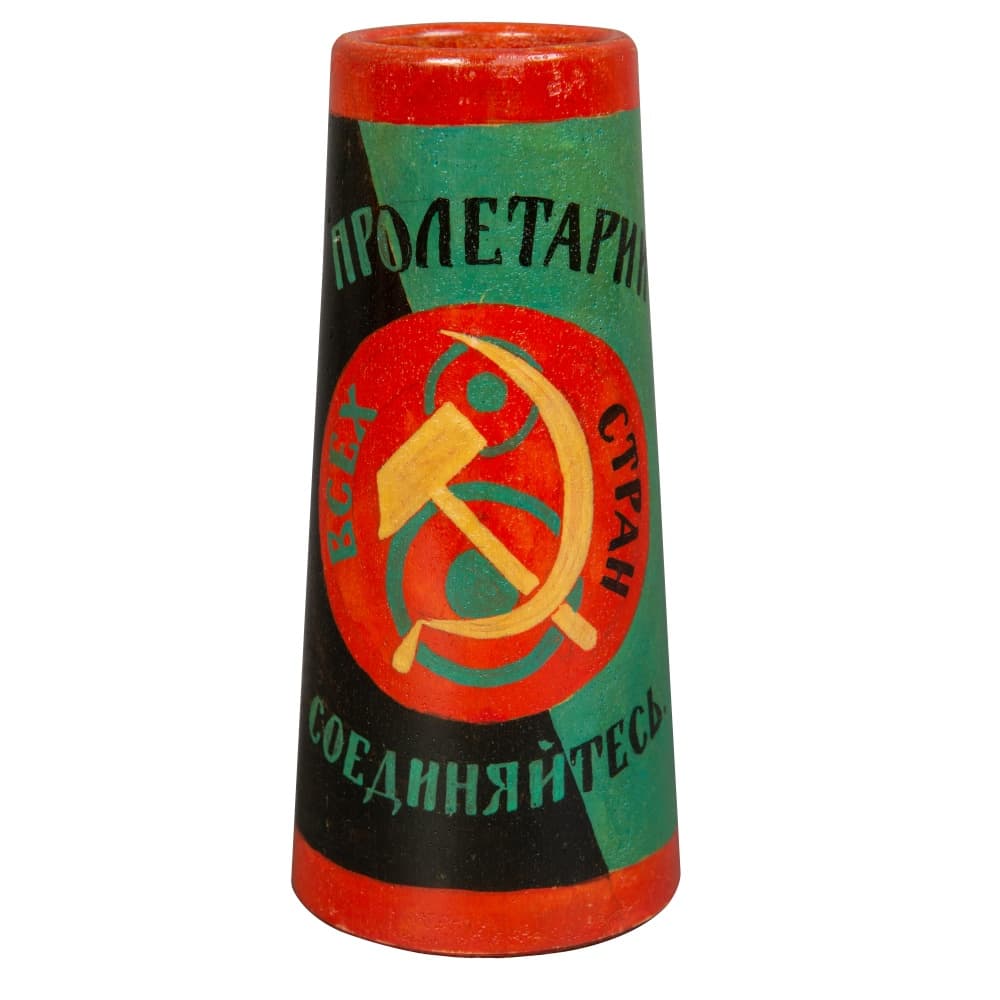 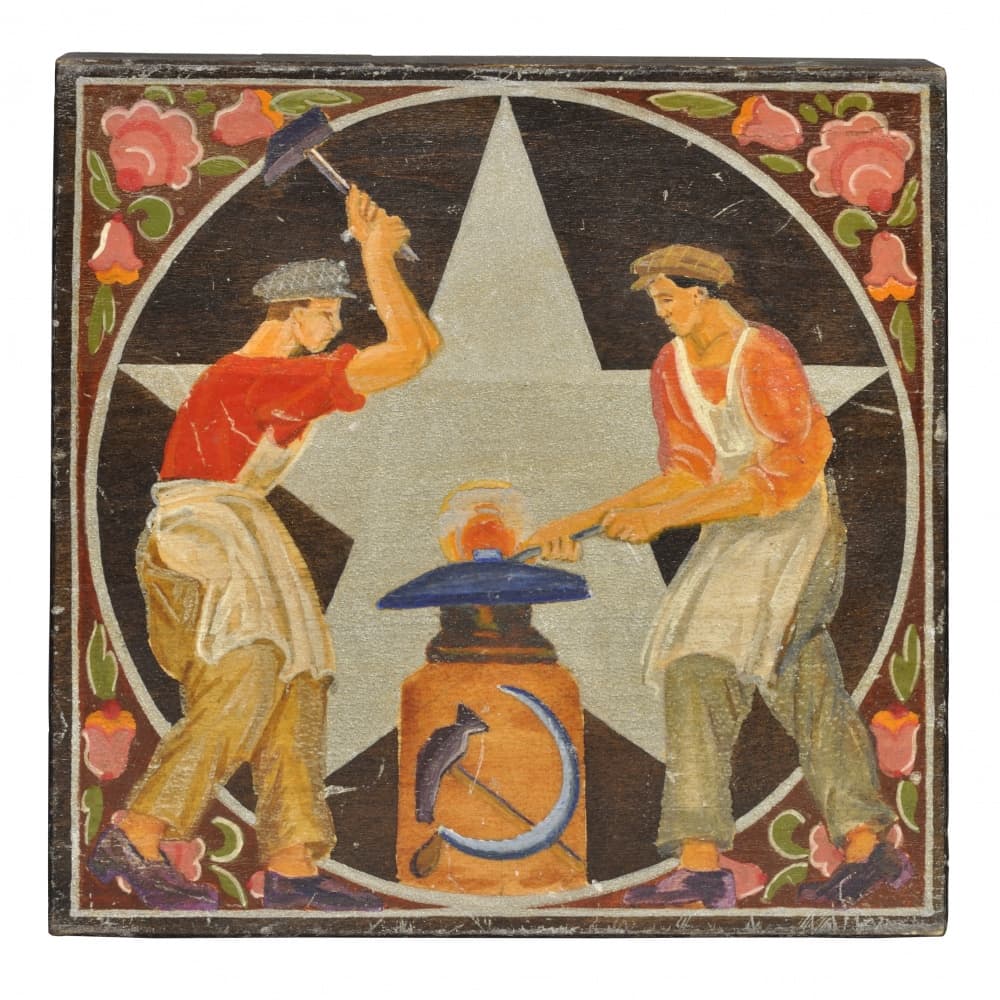 CASKET
Feedback
Thanks! We have received your request and will contact you as soon as possible