The collection of lacquer painting on metal was made up of works from workshops located near Moscow, the most famous of which is in Zhostovo, as well as painted trays from Nizhny Tagil, Krasnoyarsk and Kemerovo. The funds of the All-Russian Decorative Art Museum include a significant collection of over 900 items. The chronological framework of the collection covers the period from the XIX century to the present.


Trays from the Ural centers of metal painting came to the collection from the Research Institute of the Art Industry, its structural subdivision - the Museum of Folk Art (former Artisanal Museum). The core of the museum's collection consists of items collected by Sergey Timofeyevich Morozov, the founder of the Artisanal Museum.

Nizhny Tagil is the oldest center of lacquer painting on metal, which appeared in the middle of the XVIII century in the location of Demidov's plants. The earliest Nizhny Tagil trays, kept in the funds of the museum, belong to the first third of the XIX - early XX centuries. By the nature of the painting, the early trays can be divided into narrative, with floral painting, and with an architectural landscape. The pictorial paintings were "copies" of Russian and West European engravings. The "Crossing" tray (1830-1850s) is valuable for its memorial value, as it came from S.T. Morozov. A number of narrative trays have stamps of Nizhny Tagil workshops. The museum also preserves items of the 19th century: an Ural wedding chest and metal plates from the chest with narrative painting, a casket of the famous Nizhny Tagil master Isaak Fedorovich Khudoyarov.

In Soviet times, Nizhny Tagil painting began to imitate the Zhostov technique, although it was considerably inferior to it. The revival of the folk craft was promoted by the staff of the Research Institute of Art and Industry. A prominent bearer of traditional painting, a master of Ural painting was Agrippina Vasilievna Afanasyeva. A creative group to revive the craft included talented artists: AN Golubeva, VP Poleva (Grobova), T. Yudina, L. Kizilova, EL Otmakhova. Trays with their names, created in the 1980s, came from the Museum of Folk Art and are stored in the department of metal and stone. Modern Nizhny Tagil painting is predominantly of floral design, although there are also thematic trays. For example, the museum owns original works by the artist I.G. Smykova, depicting traditional lubok plots.

Moscow region was the second center of lacquer painting in terms of time of its emergence. In Troitskaya volost there were several villages that were engaged in painting on papier-mâché and metal: Zhostovo, Ostashkovo, Sorokino, Khlebnikovo, Novosiltsevo, Troitskoye. Trade and industrial exhibitions of the XIX century showed the advantage of the Ural iron trays against trays made of papier-mâché. So, the craftsmen of the Moscow region switched to painting iron trays. The collection of metal and stone contains trays of the middle XIXth - beginning of the XXth centuries made by well-known workshops of O.F.Vishnyakov, V.O.Vishnyakov, N.F.Belyaev, the Godin brothers, the Sorokin brothers, N.Tsyganov and others.

In the 1920s and 1930s, folk crafts received a new impulse. The Moscow Artisanal Museum, which cooperated with professional artists A.A. Voltaire, P. P. Konchalovsky, A. E. Kulikov, B. N. Lange, M. A. Nesterova, P. I. Spassky, E. G. Telyakovsky, V. Hvostenko offered samples, on the basis of which the artisans and artists painted the trays. In the objects of the Museum collection, received from the Museum of Folk art, reflected the complex process of the transition to the new figurative and symbolic language of the Soviet state. They reveal a new direction - propaganda art ("agitlaki") on the metal trays.

The works of the hereditary master Alexander Egorovich Vishnyakov, who was invited to the Artisanal Museum for experimental work on a new range of lacquer trays, wall plates, and panels, should be highlighted separately. Several of his works have been preserved in the metal and stone department, as well as in the collection of lacquer miniatures.

During Soviet times, art painting on metal was concentrated in one center - the village of Zhostovo, famous for its art throughout the world. The museum keeps the trays of entire dynasties: Antipov, Belyaev, Vishniakov, Gogin, Goncharov, Kledov, Leontiev and Savelyev. The Golden Fund of the Museum was represented by works of Zhostovo masters of the 1920s-1990s: B. V. Grafov, V. I. Duzhaev, V. V. Zhmylev, P. S. Kurzin, E. P. Lapshin, A. I. Lyoznov, V. I. Letkov, N. N. Mazhaev, P. I. Plakhov, V. N. Pyzhov.

There is a small collection of Siberian paintings of the 1980s in the museum collection - the products of the Krasnoyarsk "Souvenir" association and the Kemerovo factory of arts and crafts "Vesna", which appeared with the support of the Art Industry Research Institute. Floral painting of trays is often supplemented by elements of Siberian nature - cones, fir and pine branches, forest berries.

One of the additions of decorative and applied art items to the museum fund was a gift from ROSIZO employee, collector Tatyana Viktorovna Gorlova, made in 2019. In particular, she gave the museum sixteen trays of famous Zhostovo masters. Among them are works by contemporary talented artists L.Y. Goncharova (Dyatlova) and T.N. Sholokhova. 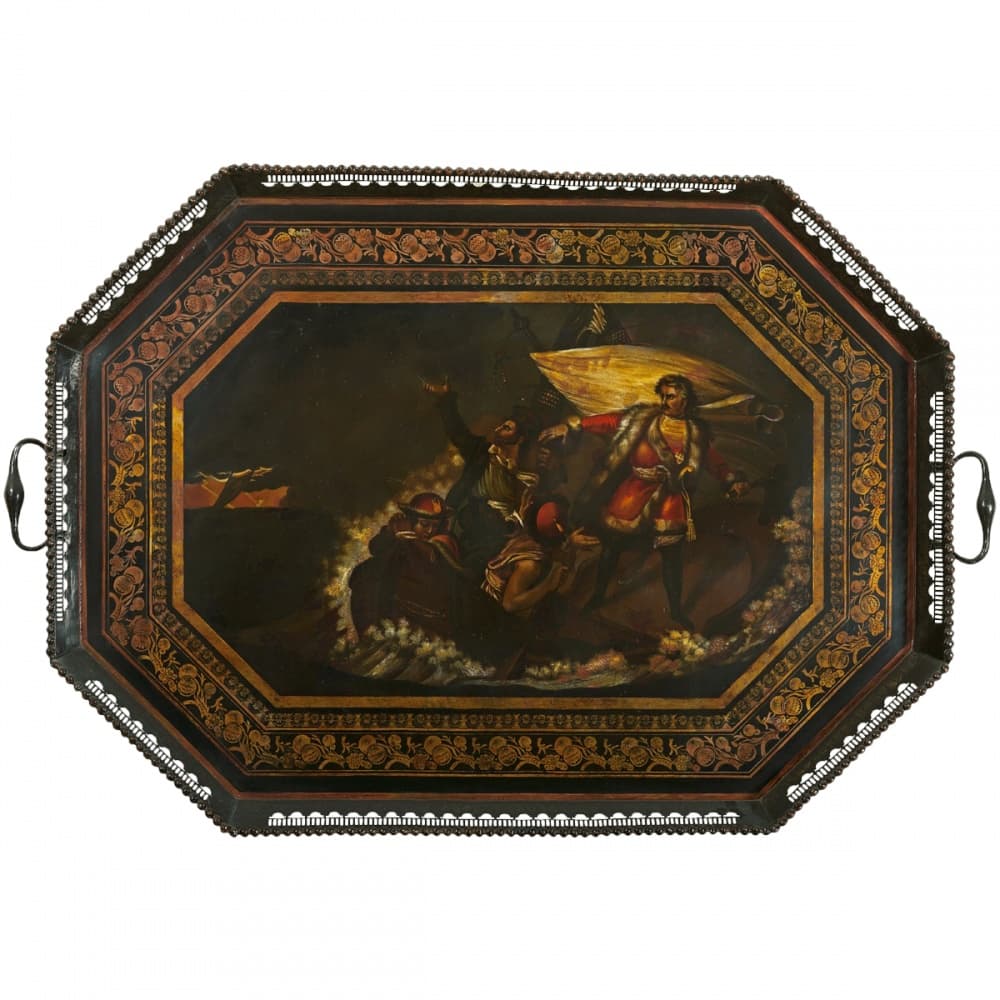 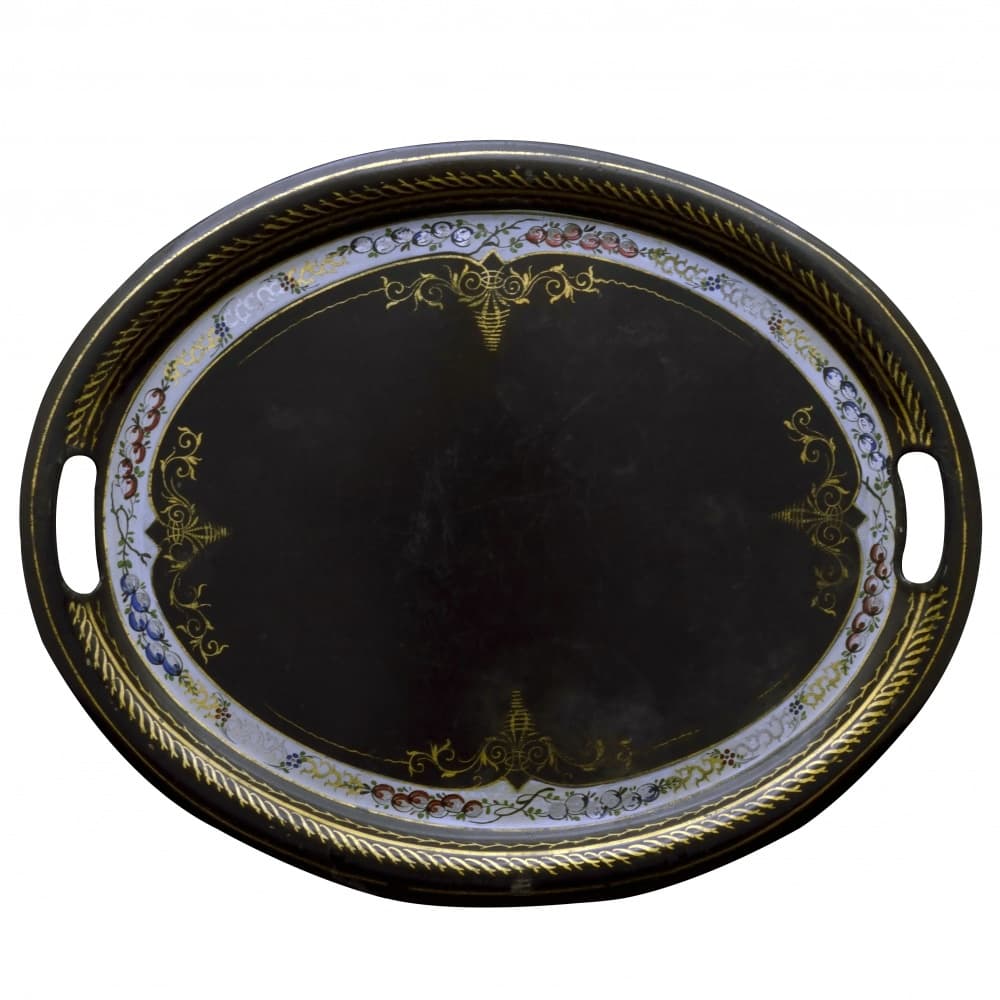 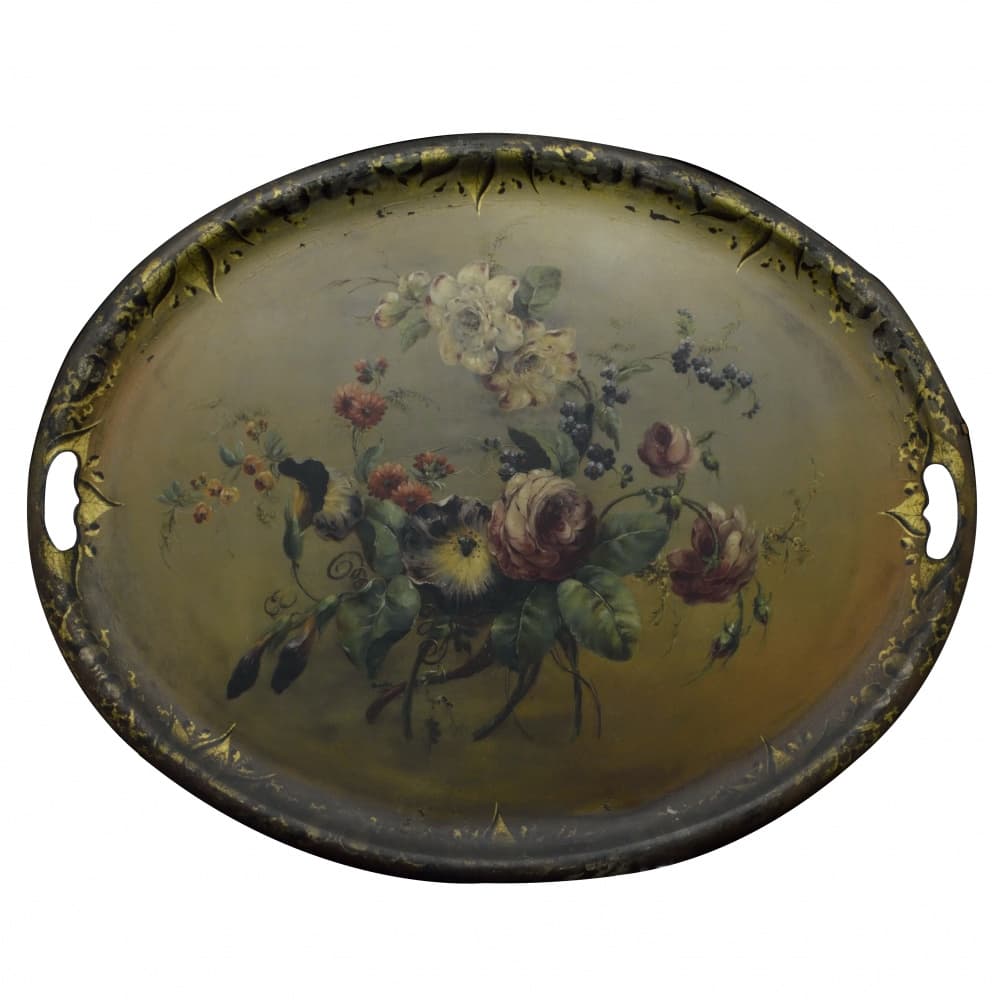 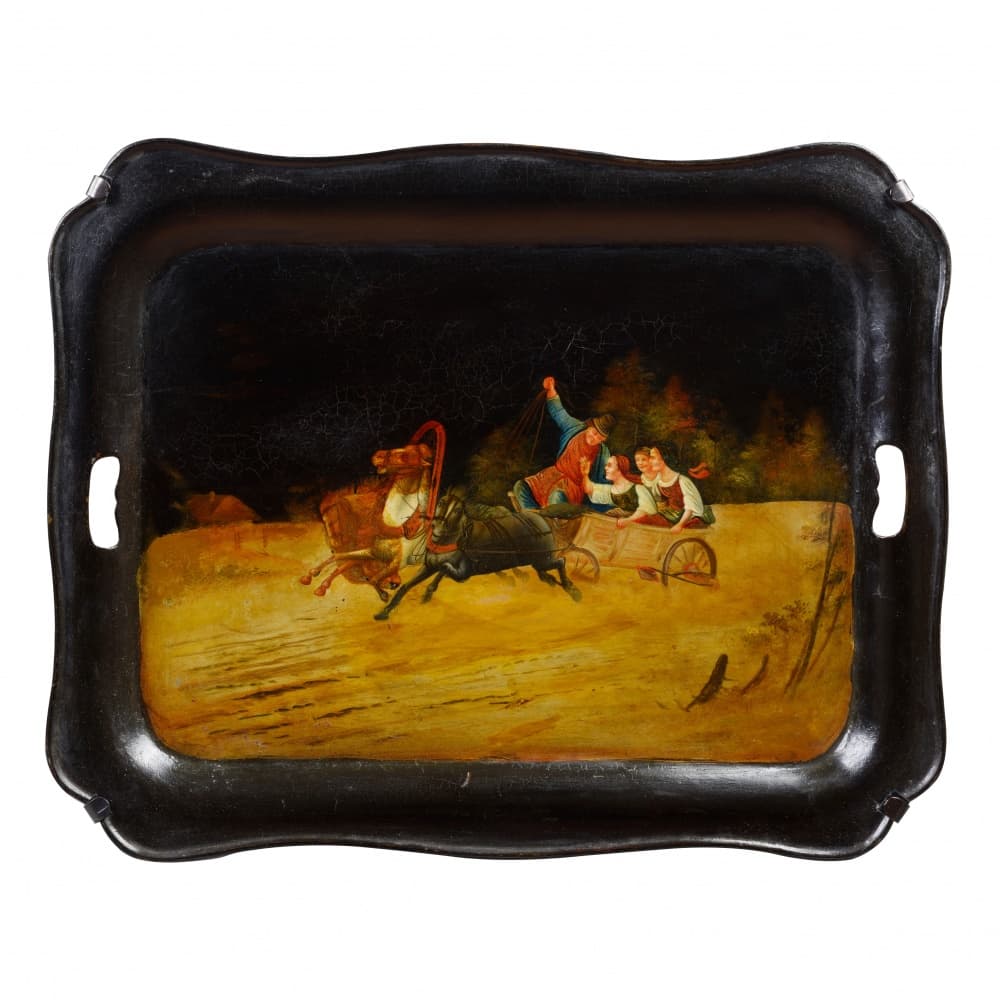 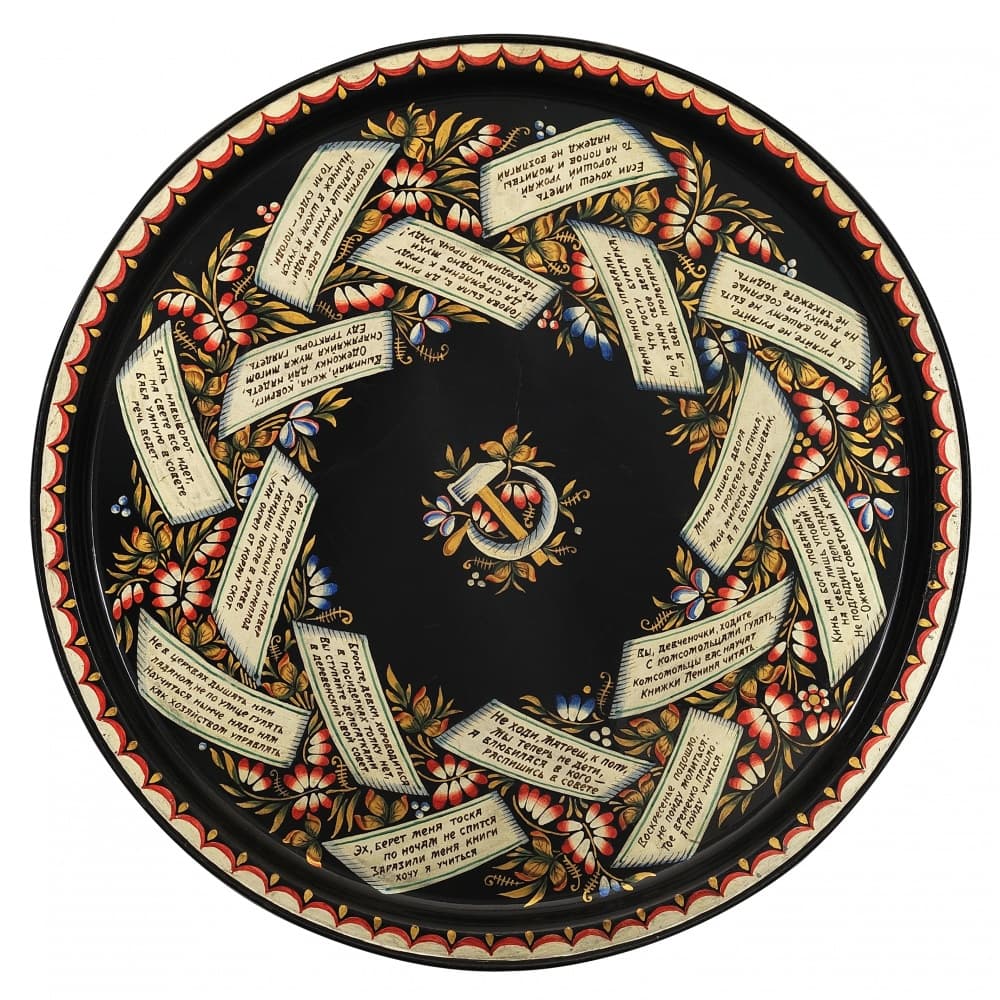 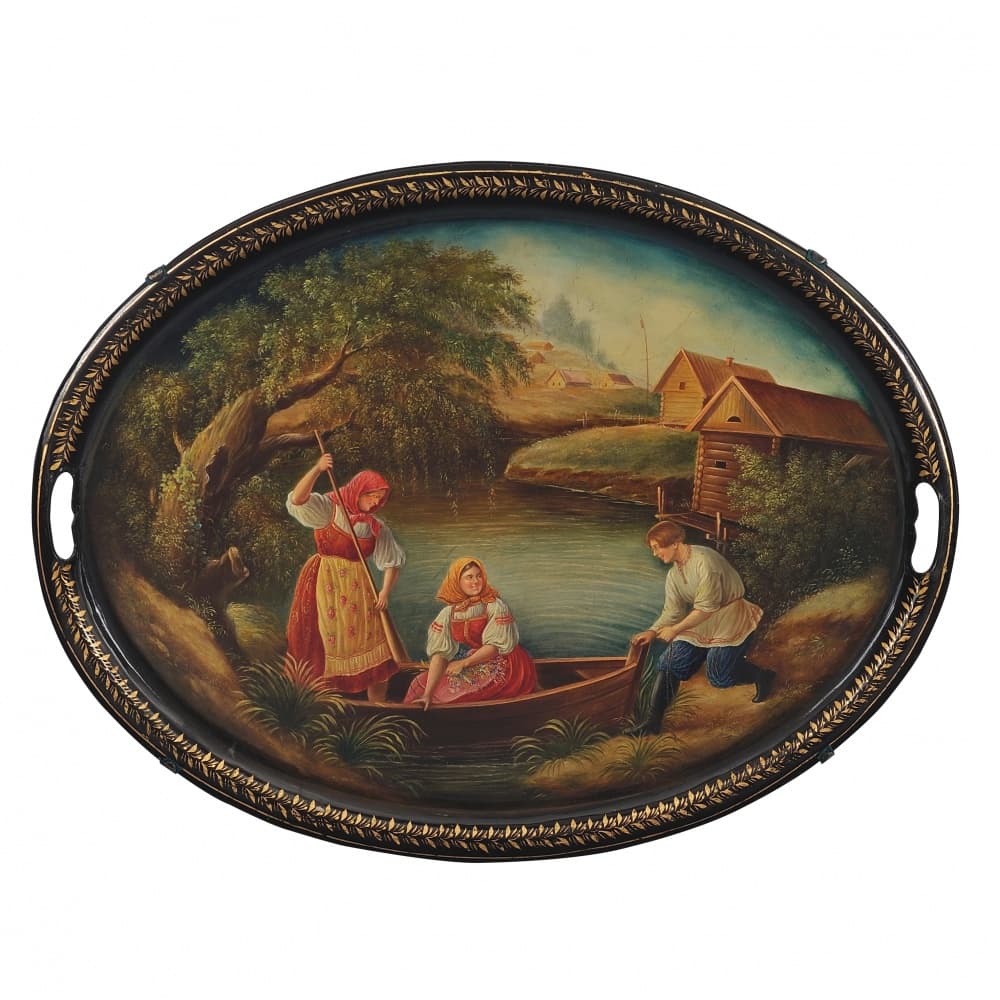 TRAY "GIRLS IN A BOAT" 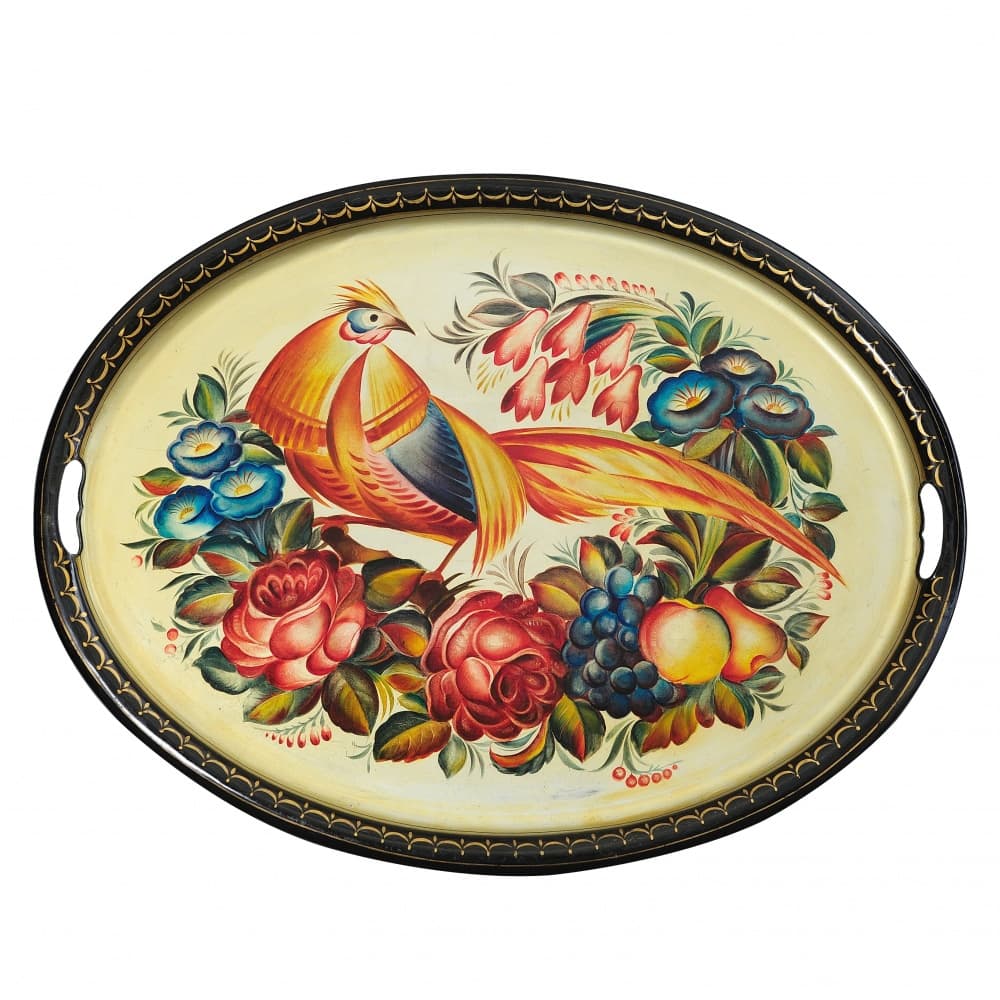 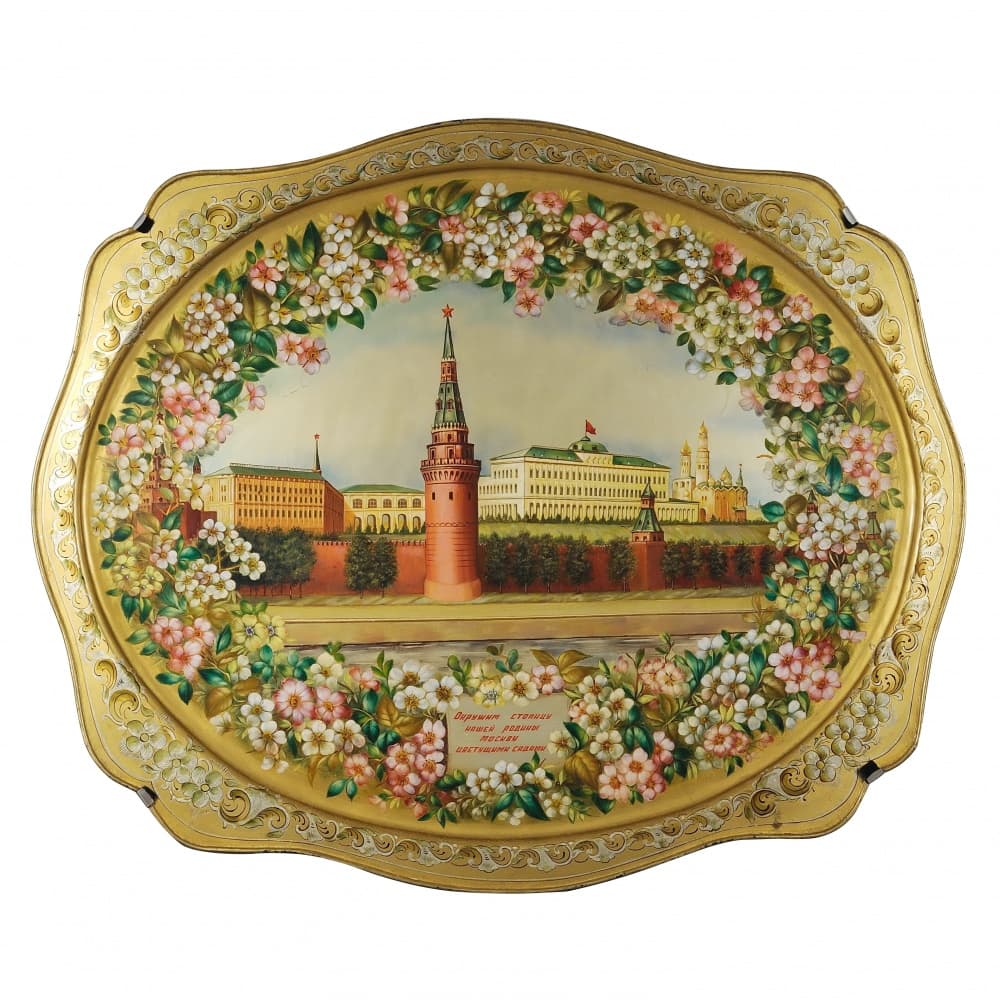 Tray "View of the Kremlin" 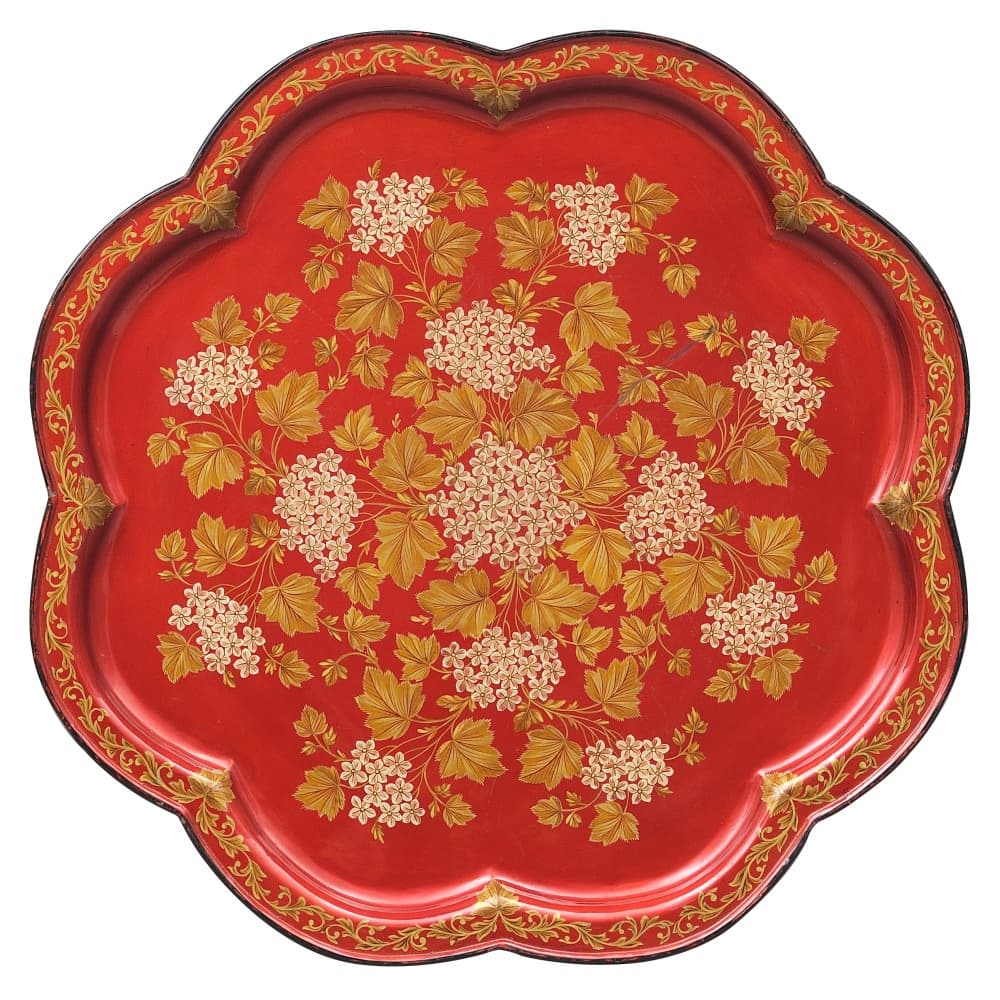 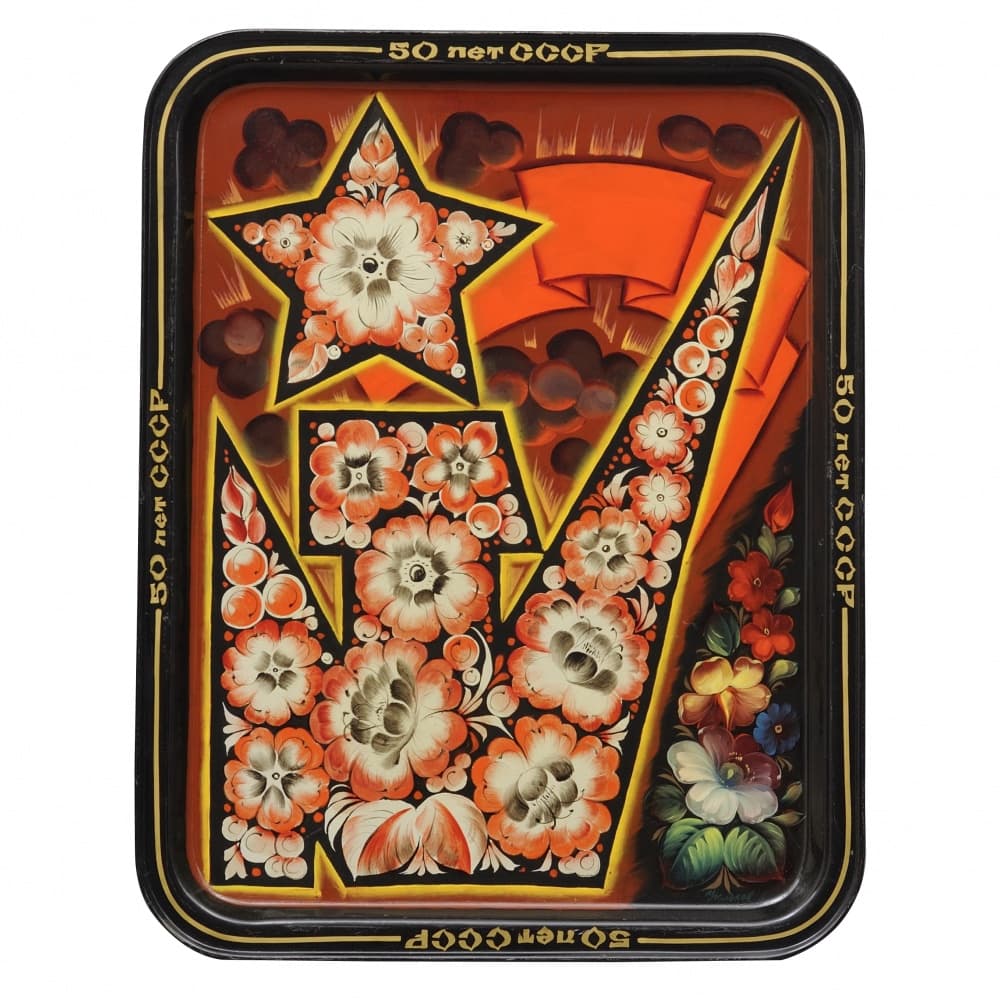 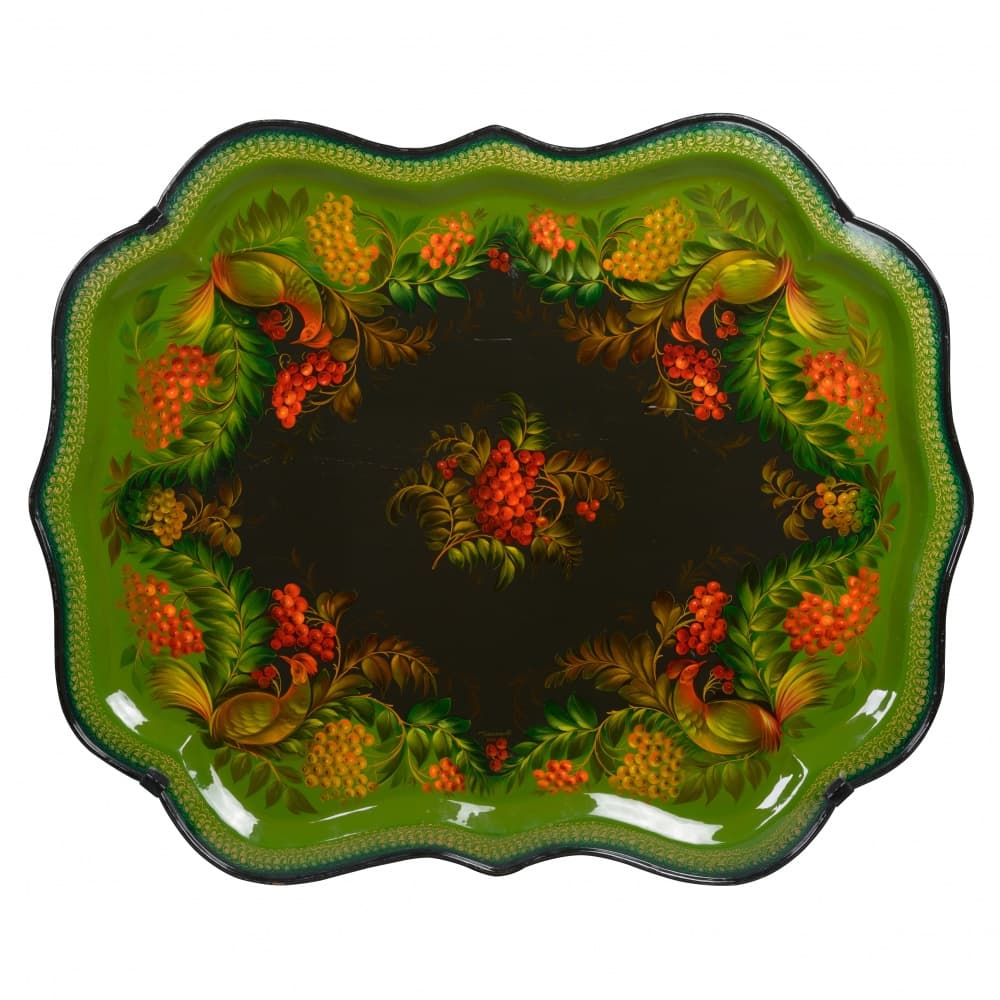 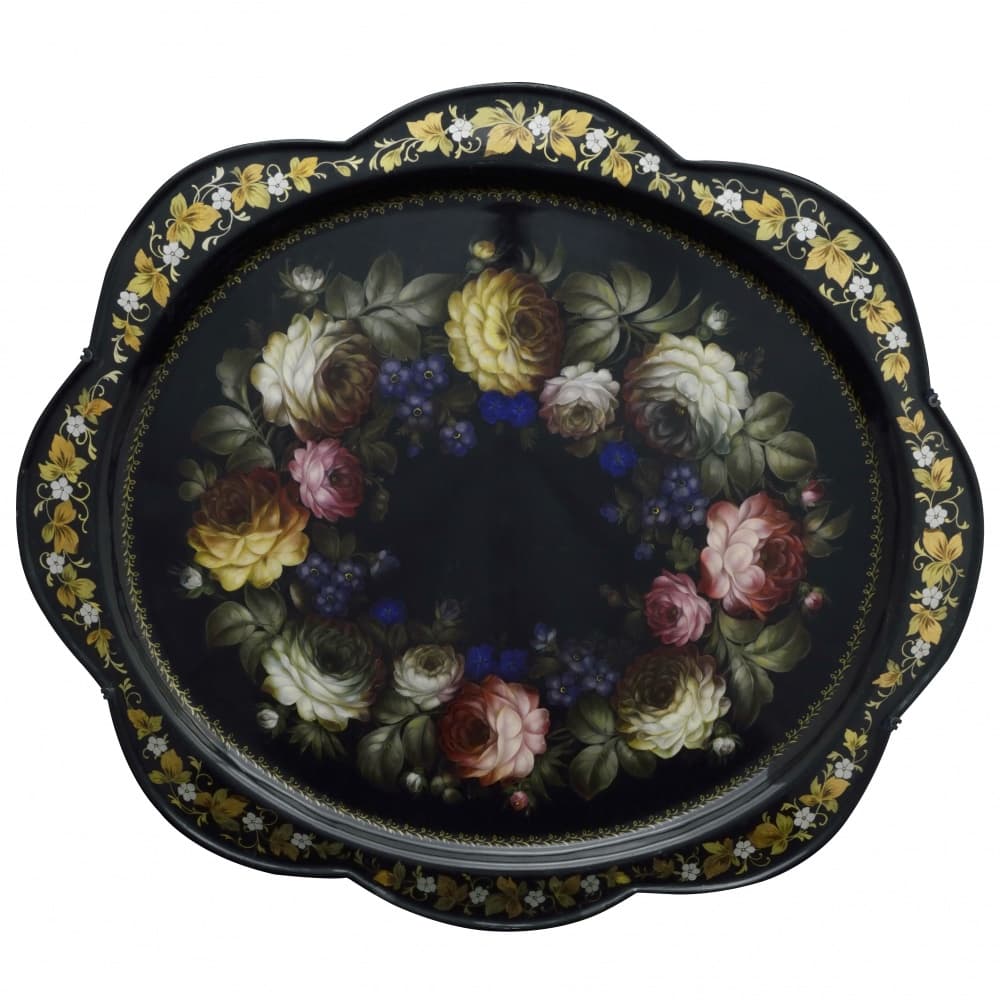 TRAY "ROUND DANCE OF ROSES" 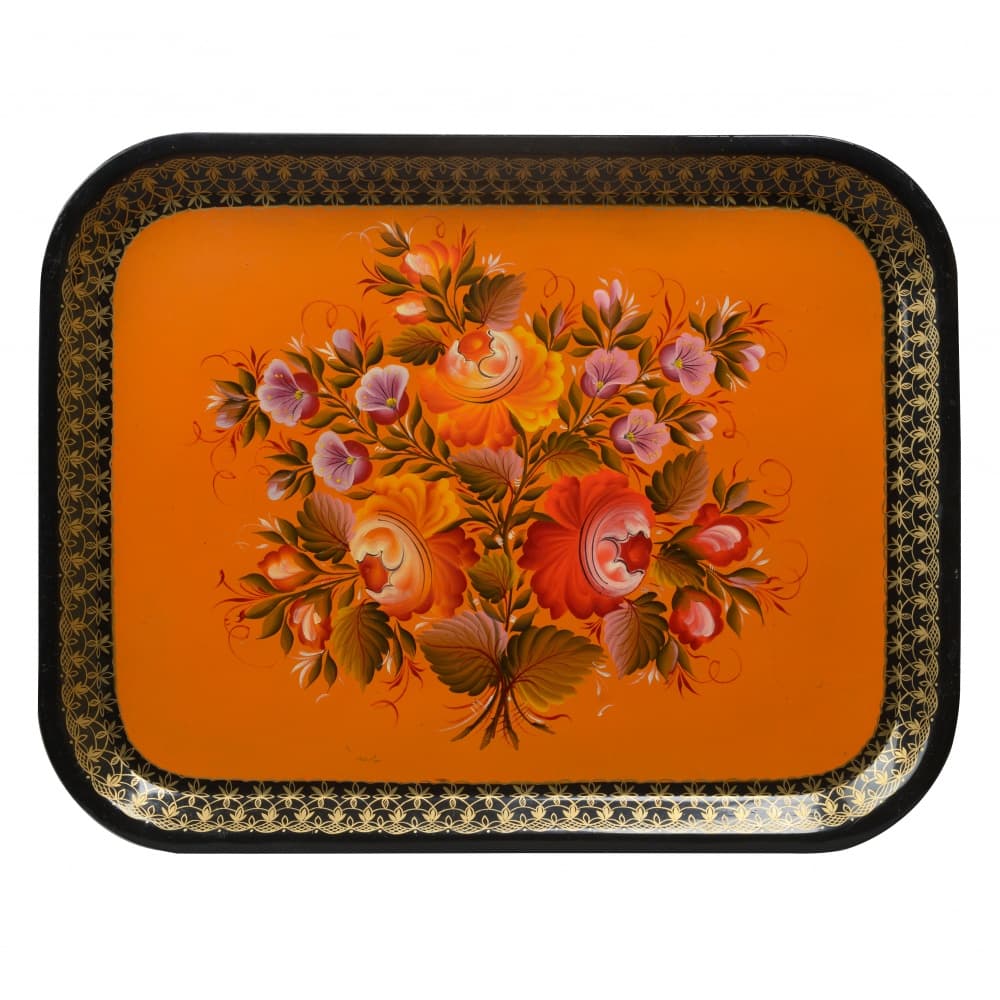 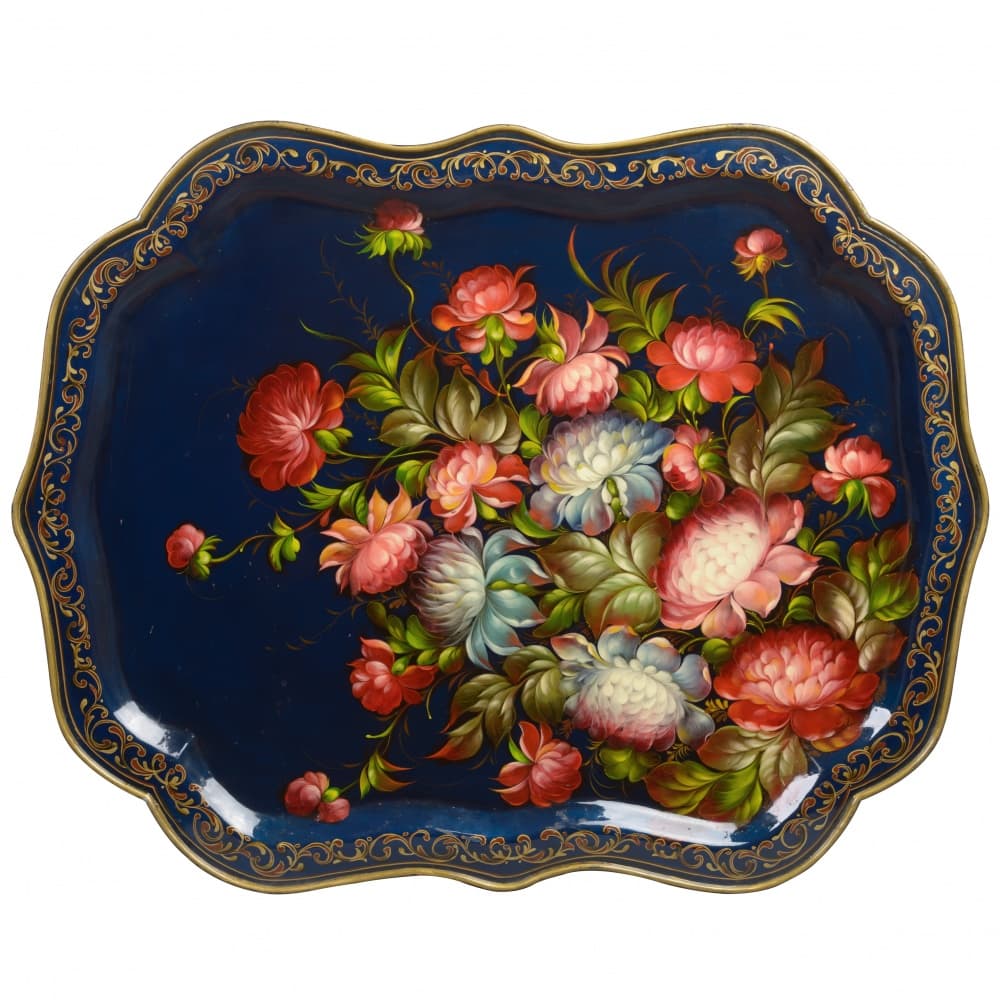 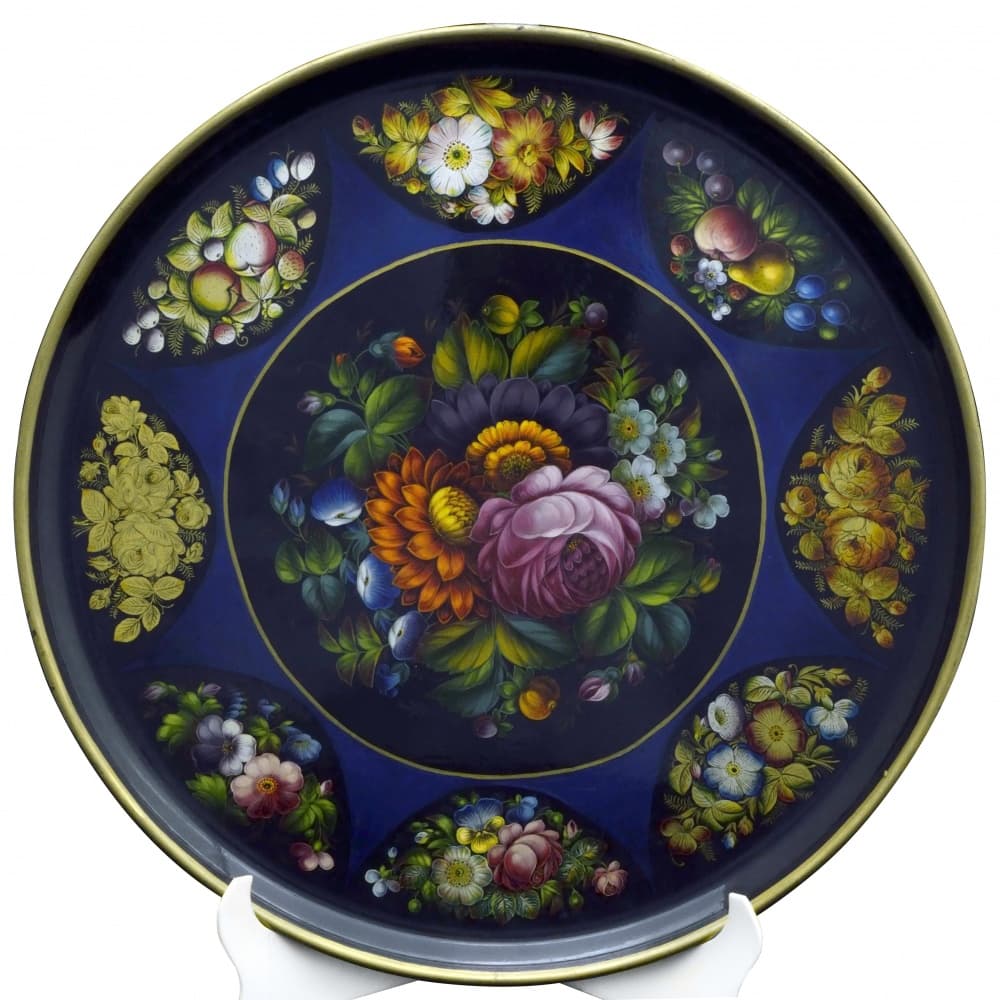 Rounded tray
Feedback
Thanks! We have received your request and will contact you as soon as possible