Just imagine — the All-Russian Decorative Art Museum keeps over 4,000 decorative porcelain items. Those are iconic works of leading Soviet and Russian artists and sculptors employed at porcelain enterprises. The bulk of the assemblage came from private collections of the singer Leonid Utesov and the thespian couple of Maria Mironova and Alexander Menaker, which were supplemented by exhibits acquired through the museum’s painstaking collecting efforts. All of these exhibits are designer products signed by their authors and existing in a single copy only, or, if they do have a duplicate, it also has been made by the author. The wonderful fragile material conveys the atmosphere of the time period from the 1920s to the early 2000s, becoming an art document or a mirror reflecting the culture, ways of life and daily routines of an entire era.

These items are complemented by mechanically-decorated works (made with the use of stencil, airbrush, printing, decal), which are not inferior in their historical and artistic significance to hand-painted articles. Heavily underappreciated in their time, today they have taken their rightful place in the museum collection, which has been in the making for over 30 years.

In the early XX century, the history of Russian porcelain was closely related to the political situation in the country. As early as in the very first months of its existence, the new government appealed to the artists, asking them to help disseminate the slogans of the revolution. And art, in turn, needed new and vibrant images imitating the rhythms and dynamics of the time. Propaganda porcelain is acclaimed as a unique phenomenon in the history of Russian decorative arts. Great artists infused it with a breath of high culture. These articles were not intended for household use, they were replicated in limited quantities, and today are recognized as having a great artistic value.

Propaganda porcelain approaches graphic arts or a political poster: the texts woven into the ornament are combined with Soviet emblems, images of the hammer and sickle, and the painting becomes more flamboyant. Sergei Chekhonin played a major role in the creation of the concept of propaganda porcelain.

In 1918, Chekhonin revolutionized porcelain in more sense than one. He created his own signature style of porcelain-making and developed a new method of painting based on a combination of images and inscriptions, promoted new Soviet heraldry, new symbols and emblems. Afterwards, this style influenced all Soviet art.

Two works of the artist Aleksandra Schekotikhina-Pototskaya are real jewels of the porcelain exhibition: “A Sailor Taking a Walk on May Day in Petrograd” and “The Commissar” (both created in 1921). The artist regarded porcelain plates, dishes and trays as a surface to create upon, and she sweepingly and freely covered it with paintings, producing dynamic sketches, bold and spirited. Traditional free painting, decorativeness of colors, folklore motifs of Russian art are vividly referenced in the pictorial imagery of the decorative dish “The Bell-Ringer” (“Long Live the Eighth Congress of the Soviets!”, 1921).

Each figurine is a character, a historical figure or an individual representing their age. Such are “A Sailor with a Banner” and “A Worker Delivering a Speech” (1920s). Despite their small size, the sculptures seem monumental, with laconic painting skillfully imitating reality.

Photo caption: Chess-set “The Reds and the Whites.” Here Natalia Danko updated traditional figures in the spirit of new symbolism. The queen of the Reds is a peasant woman with a hammer and sickle. The white king is a Knight of Death. Each figurine is represented by an exquisite miniature.

The plastic properties, whiteness and shine of porcelain attracted the young avant-garde artists Kazimir Malevich, Nikolai Suetin, Ilya Chashnik, who decided to put their Suprematist theories to the test. The gallery displays items from a chinaware set based on the paintings of the late 1920s and 1930s; they were designed by Suetin, a student of Malevich. Rhythmic compositions of black and red lines and stripes, circles and spots on the surface of the cups and saucers make traditional objects look quite unconventional. They became a token of their time and influenced the evolution of today’s style of porcelain.

In the 1930s, hand-painted articles first appeared, reflecting novel themes and motifs. This is how a new stage in the development of national porcelain began. Thematic drawings that depicted building of cities, farming activities, sports achievements were getting widespread. The art laboratory of the Leningrad Porcelain Factory became the center of creative experiments.

The sets of the taleteller and romancer Alexei Vorobyevsky stand out for their ornate and elegant painting. The motifs of his images are borrowed from fairy tales or theater, creating a joyful and radiant world. His paintings look like precious lace.

The Dulevo Porcelain Factory is based in a small town in Moscow suburbs. It was famous for its cups and teapots painted in vibrant colors, similarly to the paintings of the Russian artist Boris Kustodiev. In the 1930s, Piotr Leonov, a man of indomitable energy and temperament, became the factory’s art director. He was obsessed with the idea of ​​creating new national porcelain and chinaware.

In the same time period, Alexei Sotnikov, one of the most influential animal sculptors of the 20th century, also worked at the Dulevo Porcelain Factory. He was incredibly popular in his time, and today Sotnikov’s falcon is used as the Dulevo trademark.

The style that dominated in the 1960s is called “severe style.” At the time, embellishments were commonly abandoned. In the 1970s, the whiteness of porcelain, “the breath of the material” were highly valued, with painting used to create a mood, only slightly decorating an object. In the 1980s, designer porcelain was increasingly becoming groundwork for an unconstrained creative endeavor and vigorous self-expression, the search for new ideas and approaches. The 1990s were characterized by innovation, irony, and the grotesque.

A huge number of articles from that period are on display at the museum. Works of Vladimir Gorodetsky, a master of porcelain painting at the Lomonosov Porcelain Factory, deserve special mention. The artist made a major contribution to the revival and development of the famous underglaze painting technique, “which can be destroyed only with the item itself.” He enlarged the glaze color palette, adding green, gray and pearly hues to the traditional cobalt tint.

Boris Kalita, one of the leading porcelain makers in Russia, had a subtle sense of the plasticity of simple things. He transformed plain-looking cups and teapots into architectural images, an ensemble with fantastic towers, domes and pavilions. 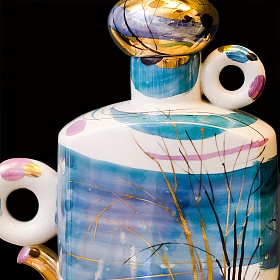 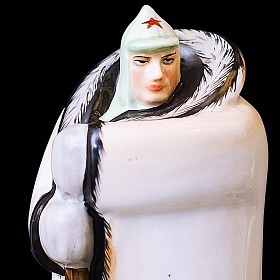 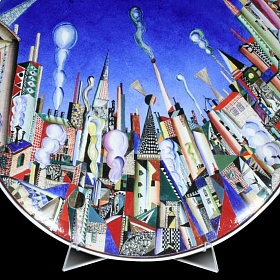 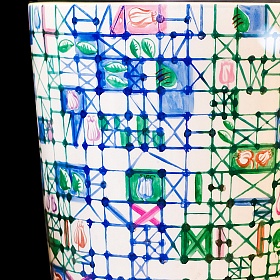 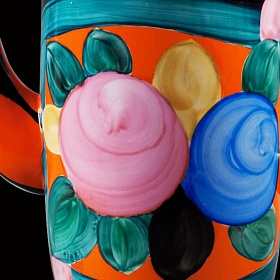 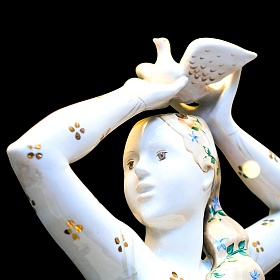 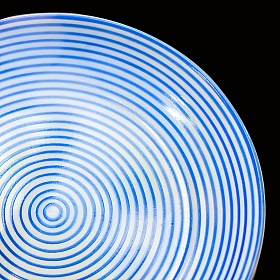 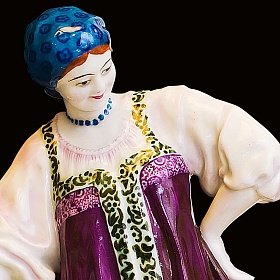 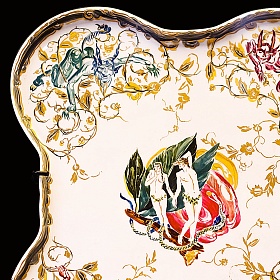 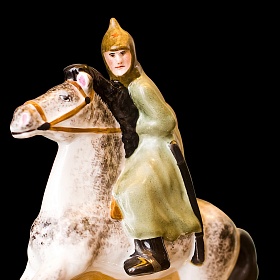