Palekh is an historic center of icon painting. After the revolution and the ban on icon painting, Palekh artists, following the example of the Fedoskinsk masters, joined together in an artel and created lacquer miniature painting with its own stylistic features. Palech painters worked with different materials: wood, papier-mâché, bone, mother-of-pearl and metal. In addition to chamber works, they were also engaged in a monumental painting.


The Palekh collection is represented by more than 800 exhibits. It includes works by several generations of masters, starting from the founder of the Palekh style, the great painter I. I. Golikov (1887 – 1937), who revealed the secret of the new art not only to the Palekh artists, but also to artists from other iconography centers, such as Kholui and Mstyora. The core of the collection consists of works by outstanding painters: I.M. Bakanov, A.I. Vatagin, I.V. Markichev, I.I. Zubkov and A.I. Zubkov, D.N. Butorin, A.V. Kotuhin, V. Kotuhin, I.P. Vakurov, A. Dydkin, and N.M. Zinoviev.

The museum's collection contains works by artists of the Palekh miniature in various techniques. On canvas: "Stepan Razin's Speech to the peasantry" by I.I.Golikov, "Ratmir at the walls of the magic castle" by A.A.Dydykin, "Shepherd Boy" by I.M.Bakanov. On metal: trophies, goblets. On bone: a paper-cutting knife "Cavalry Passes through the Ages" by People' Artist of the USSR A.A.Kotukhina and others.

Of great interest are the works reflecting another direction of creativity of Palekh masters – design of secular spaces. The Museum holds sketches on papier-mâché by Honored Artist of the RSFSR V.M. Khodov "Left-Hander" and "Three Fat Men" for the Natalya Satz Children's Musical Theatre, Moscow.

The close contacts of the museum staff with the Palekh center of miniature lacquer painting helped acquire the best works of the artists of the "silver period" of Palekh art, whose period of creative activity began in the 1960s-1970s. The collection of this period is unparalleled in its completeness among Russian museums. It includes works by People's Artist of the RSFSR B.M. Ermolaev ("Lad", "Byliny", "Russian Tales", "Song to Yarila"), Honored Artists of the Russian Federation T.M. Khodova ("Semik", "Meeting of Winners", "Dunya Held On To The Ferry", "Finest, the brave Falcon"), I. I.V.Livanova ("At the spring", " Raspberry", "Cabbage Girls"), E.F.Shchanitsyna (diptych "Crowning" and "Harvest"), N.P.Lopatin ("Rhapsody", "Who beats whom" and "Tale of Tsar Saltan"), and also last works of outstanding master O.V.An ("Carrying the Cross"). 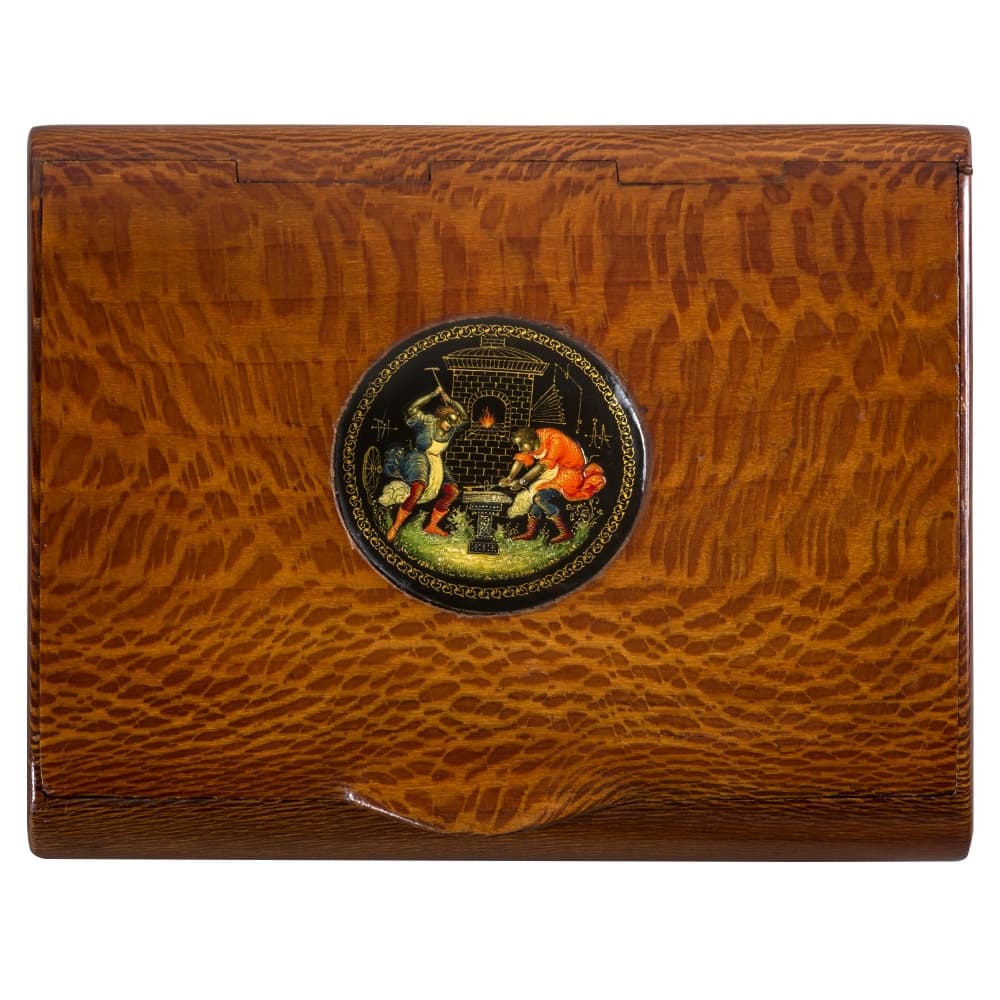 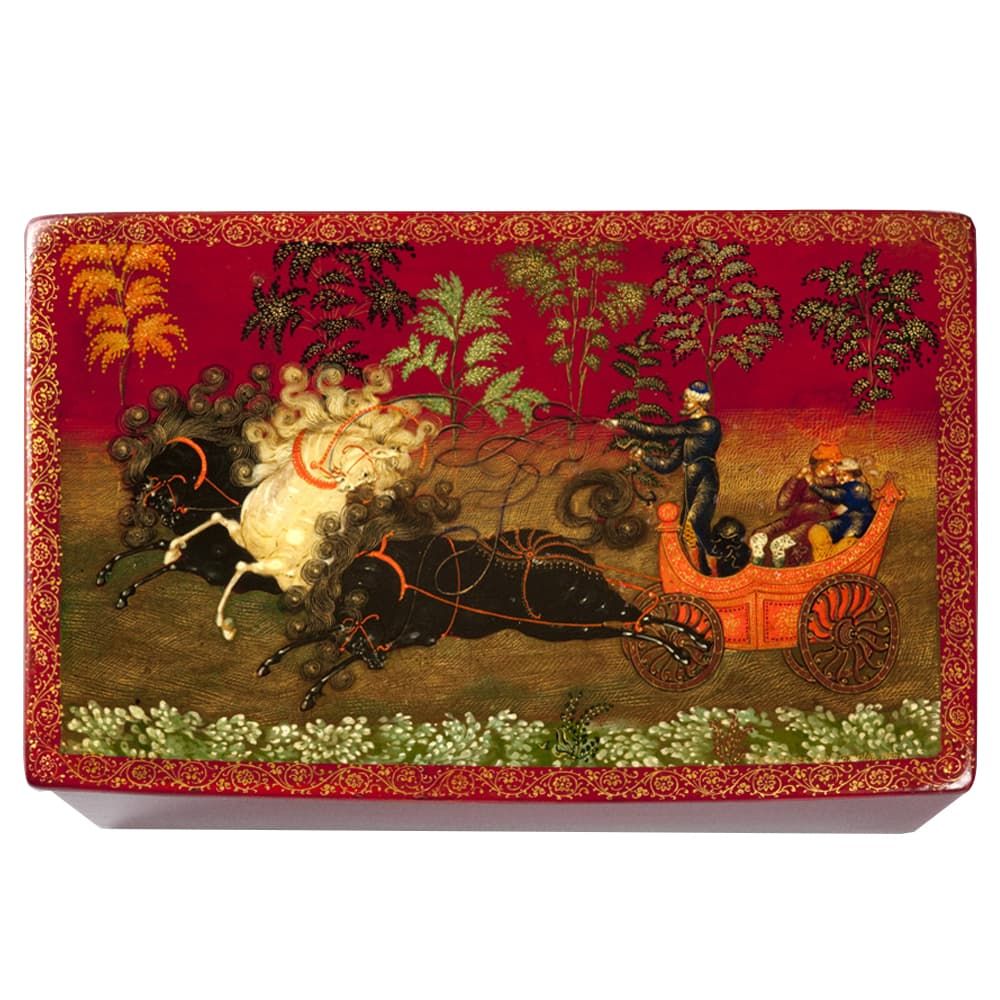 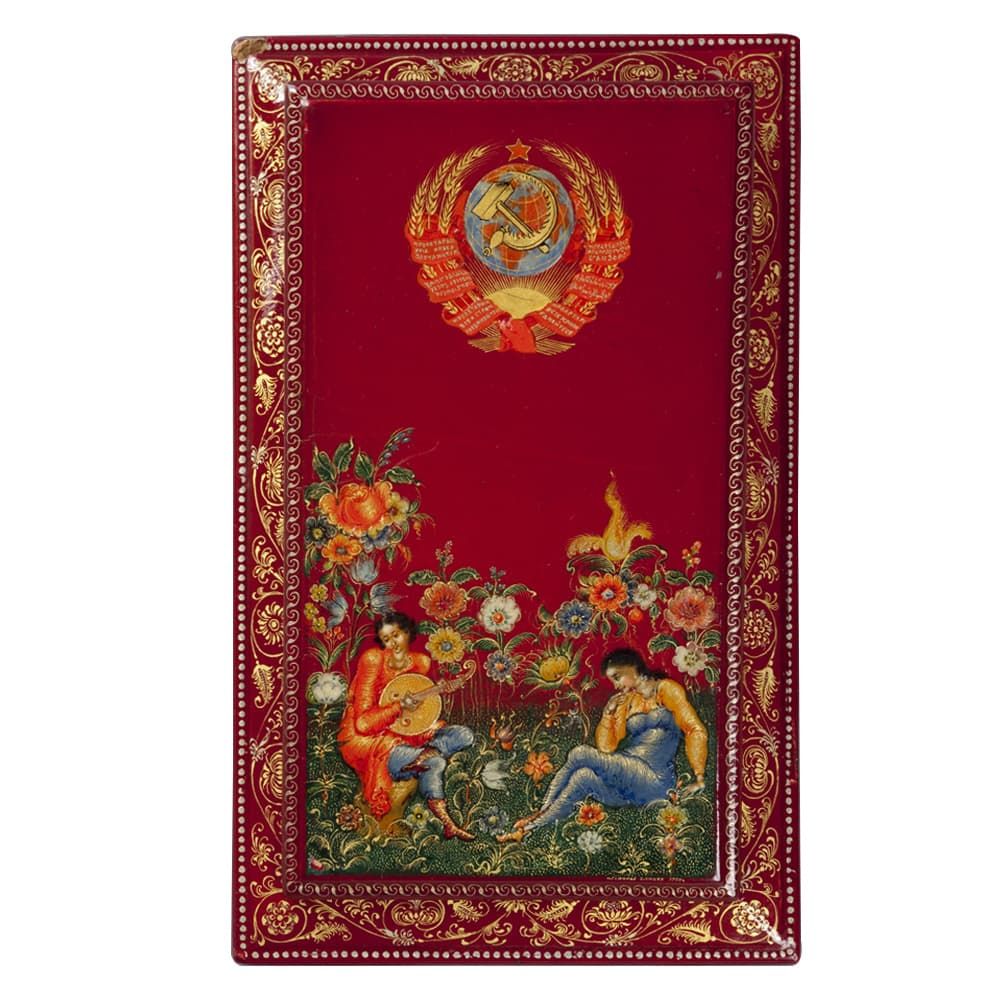 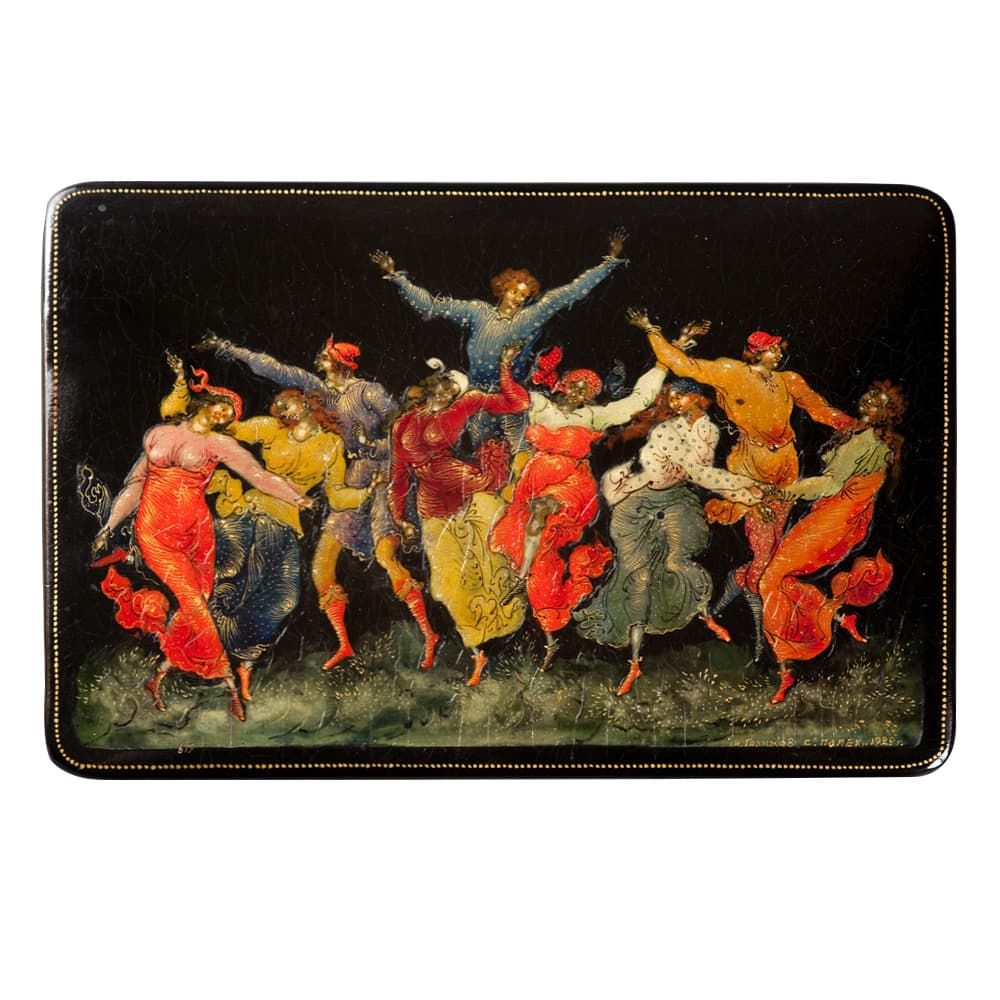 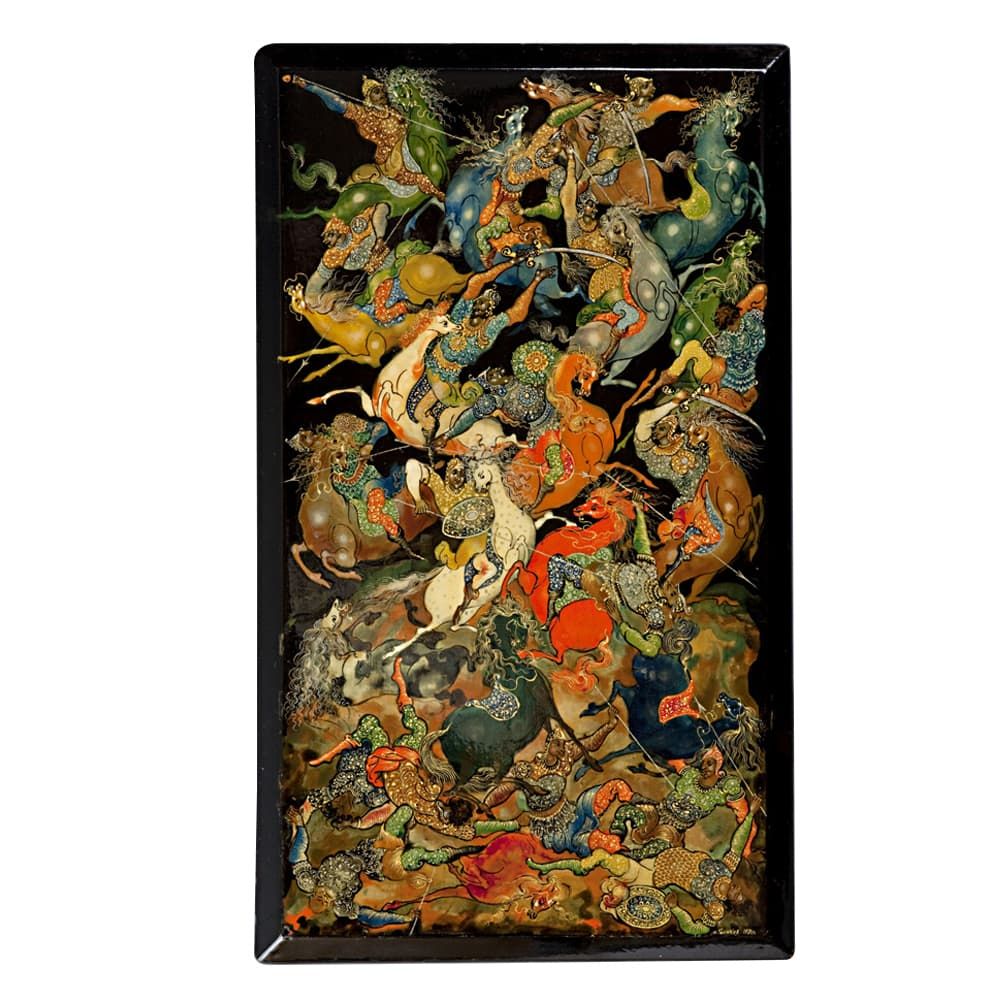 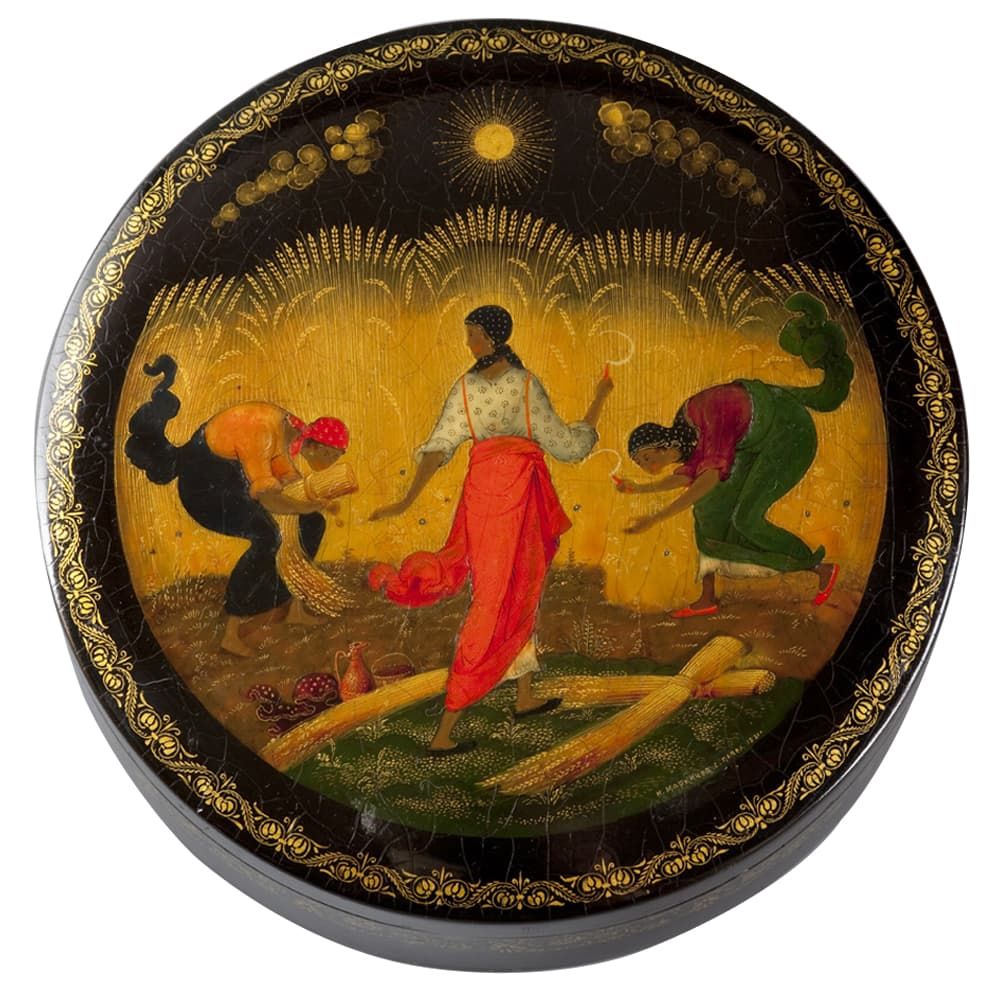 BOX WITH A REMOVABLE COVER "HARVEST" 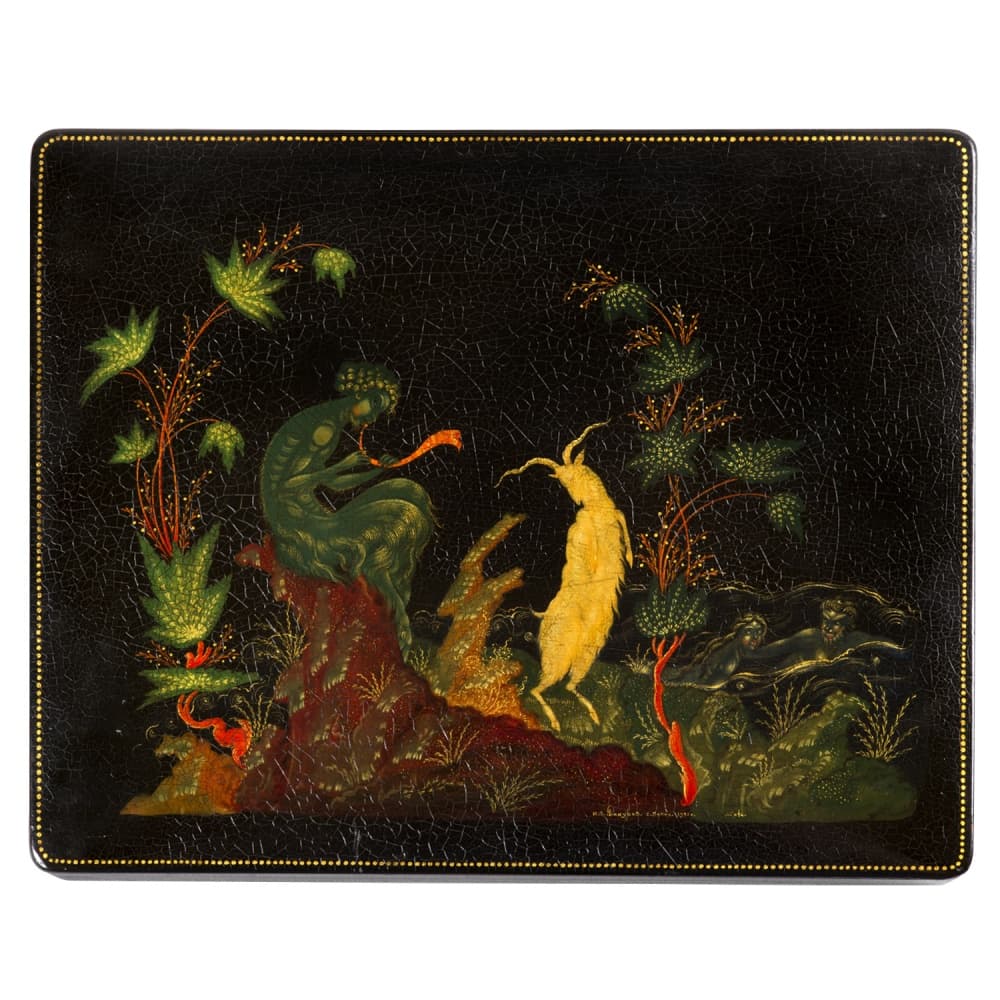 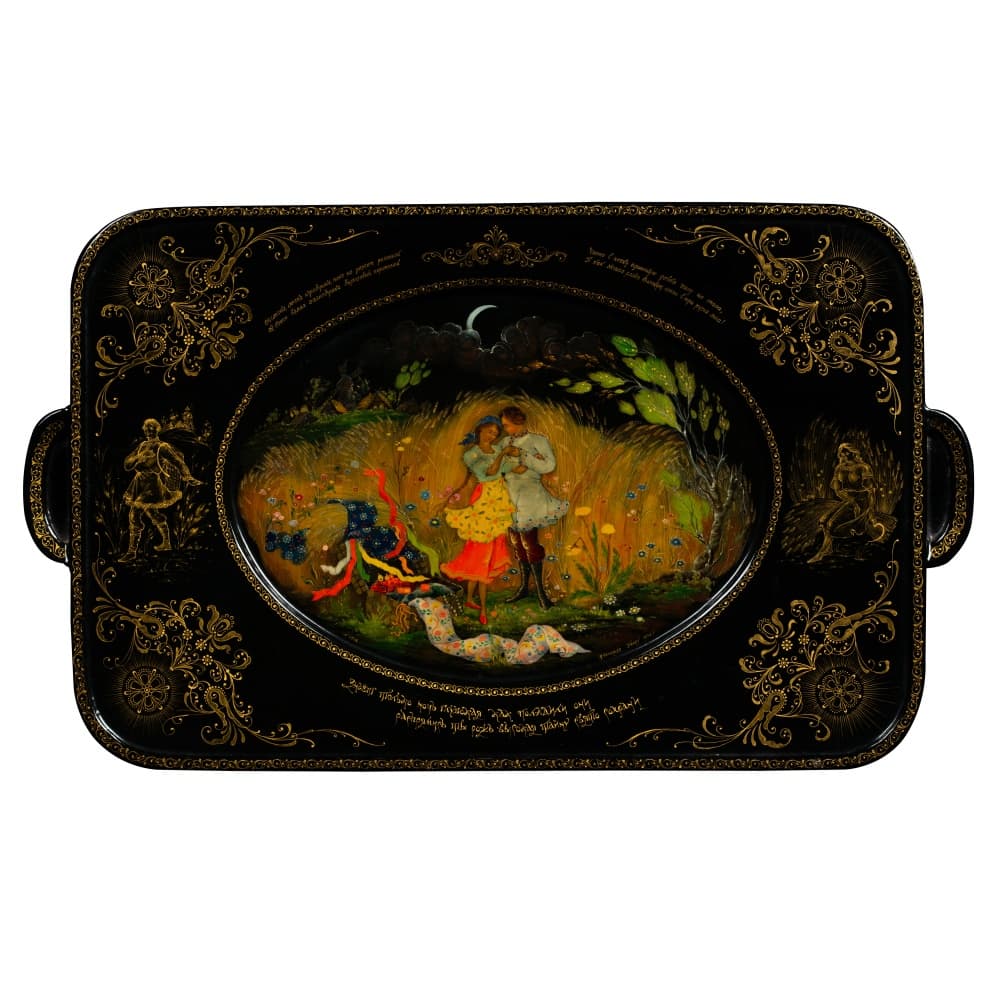 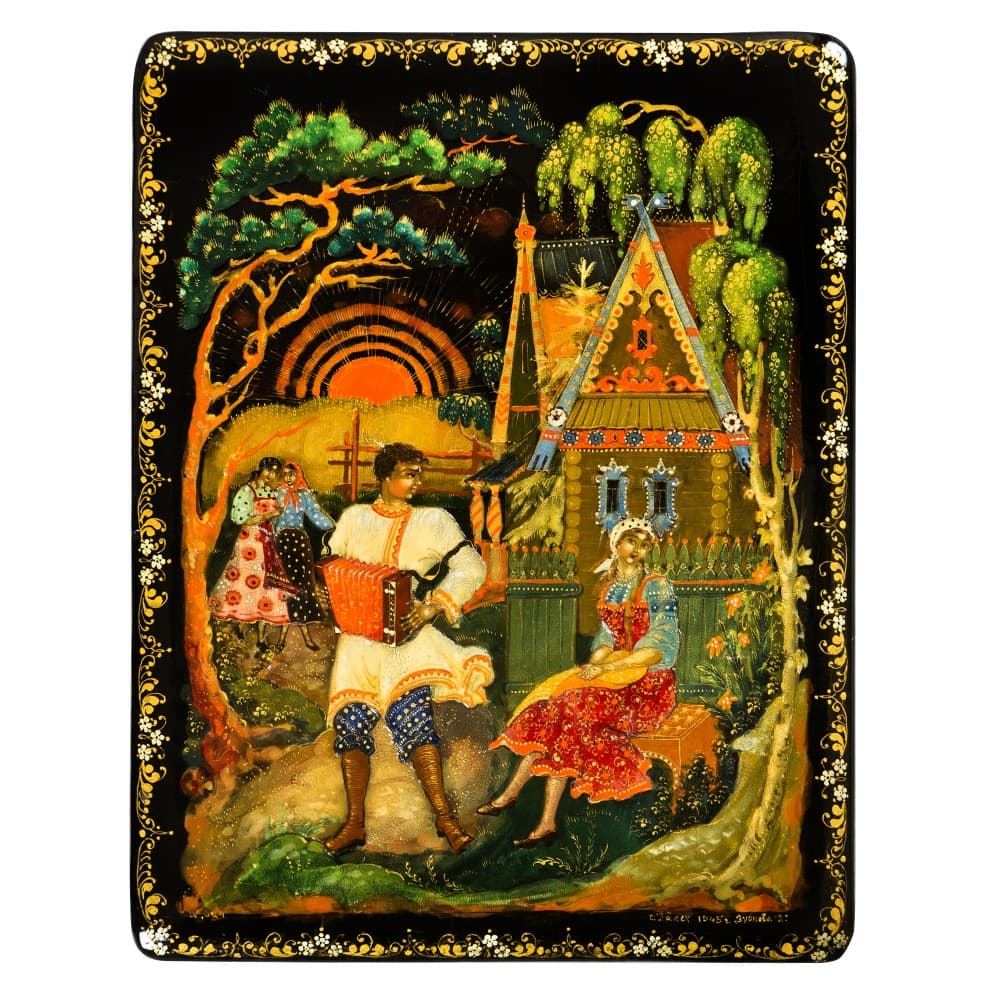 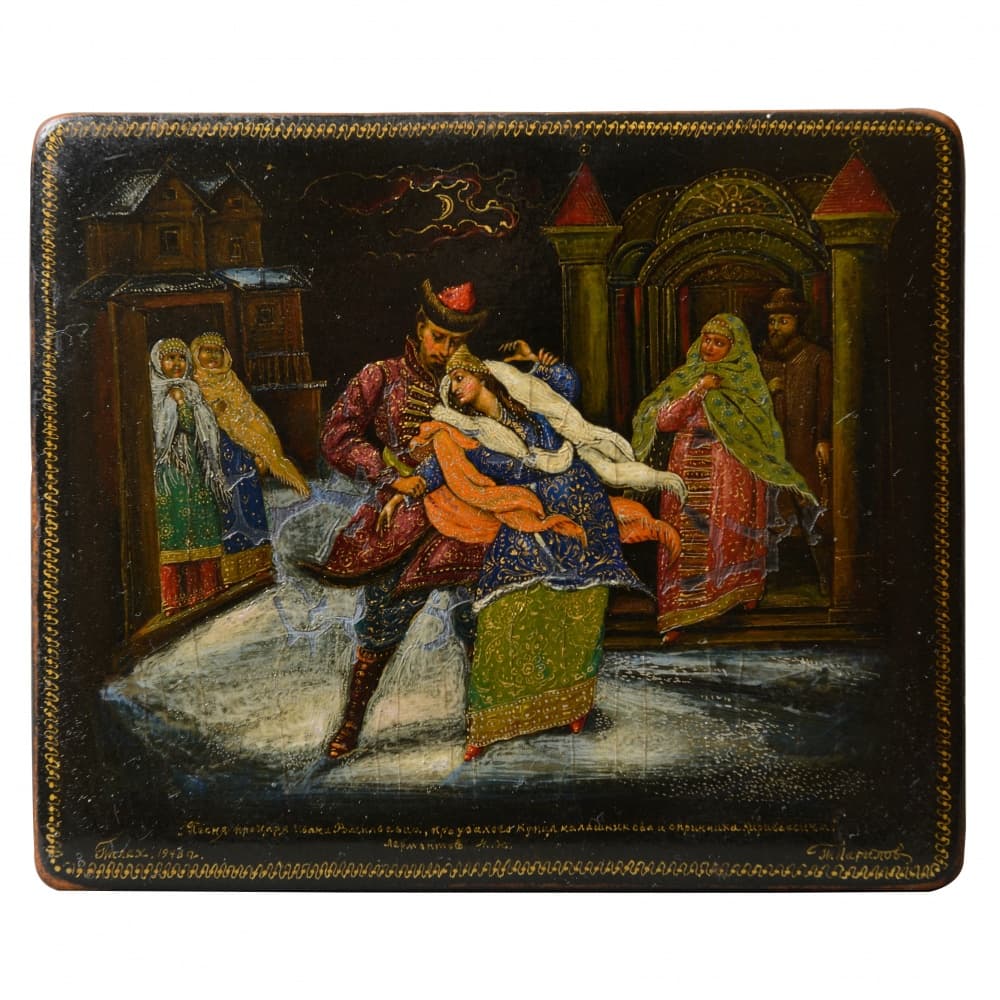 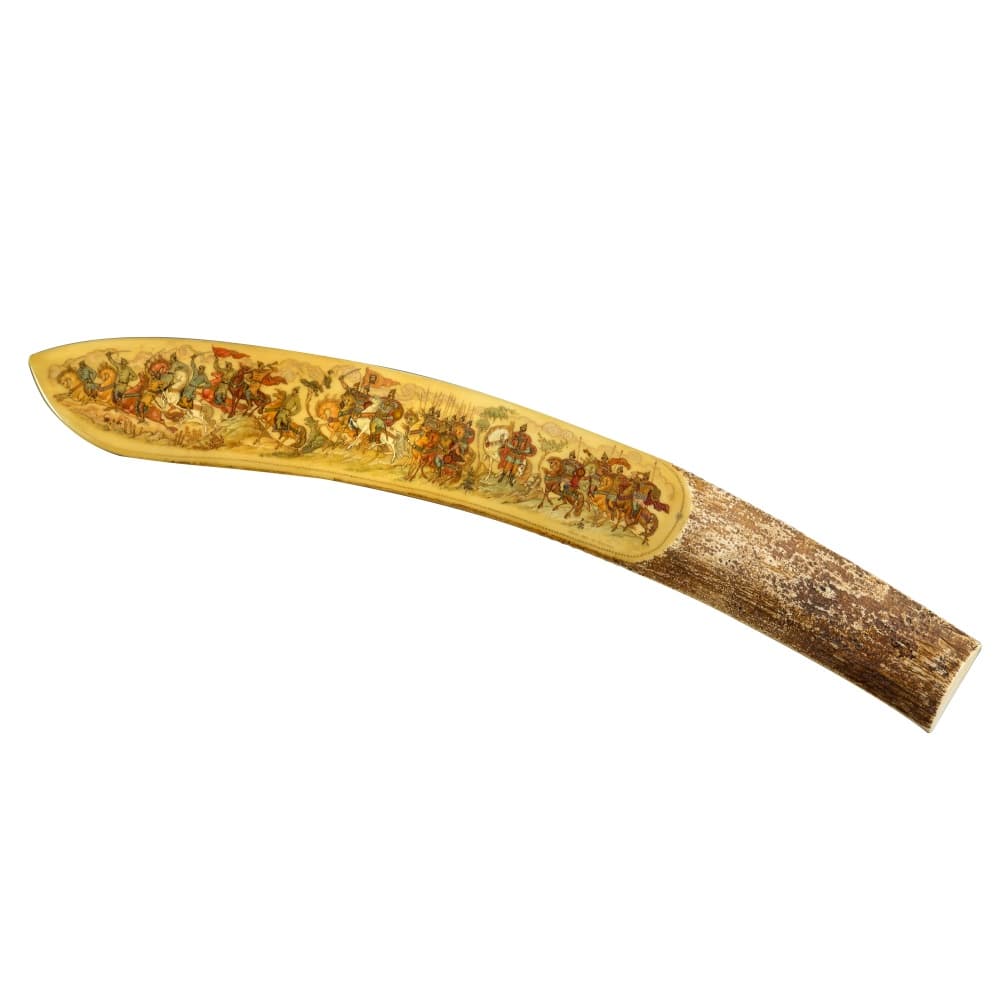 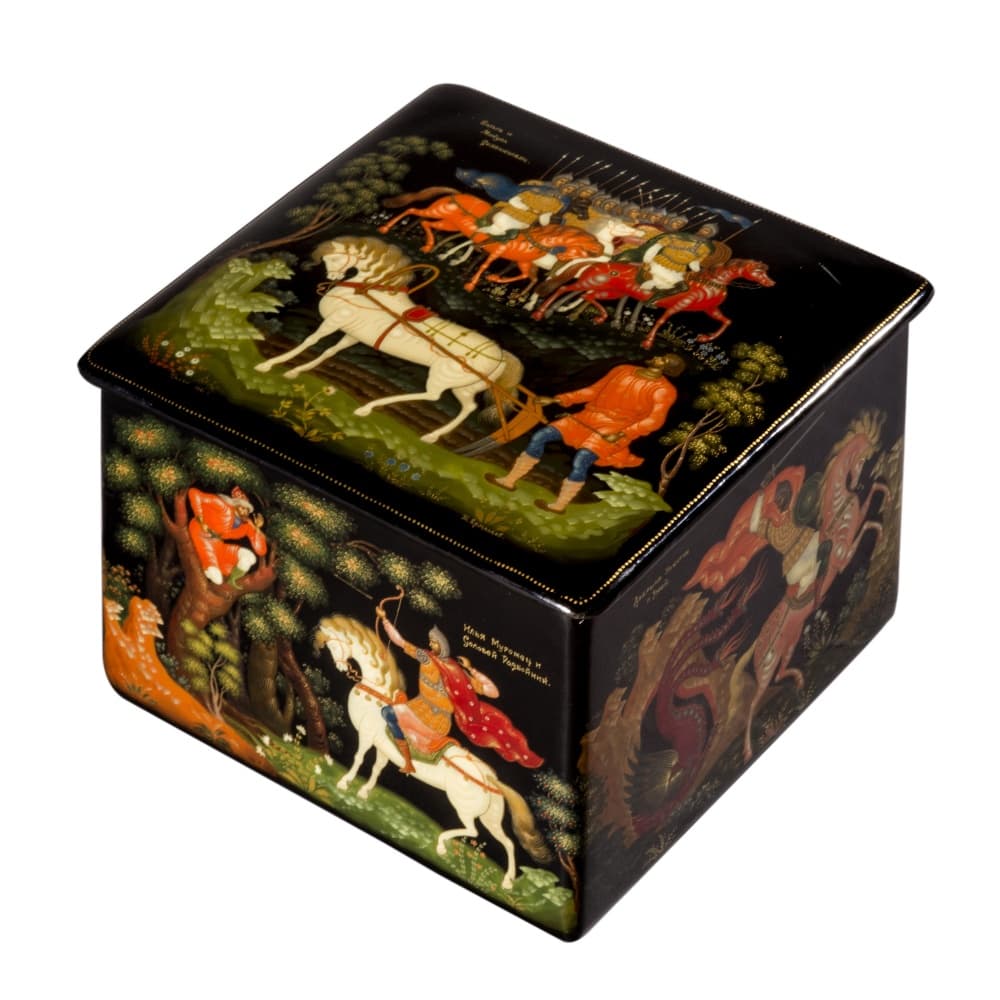 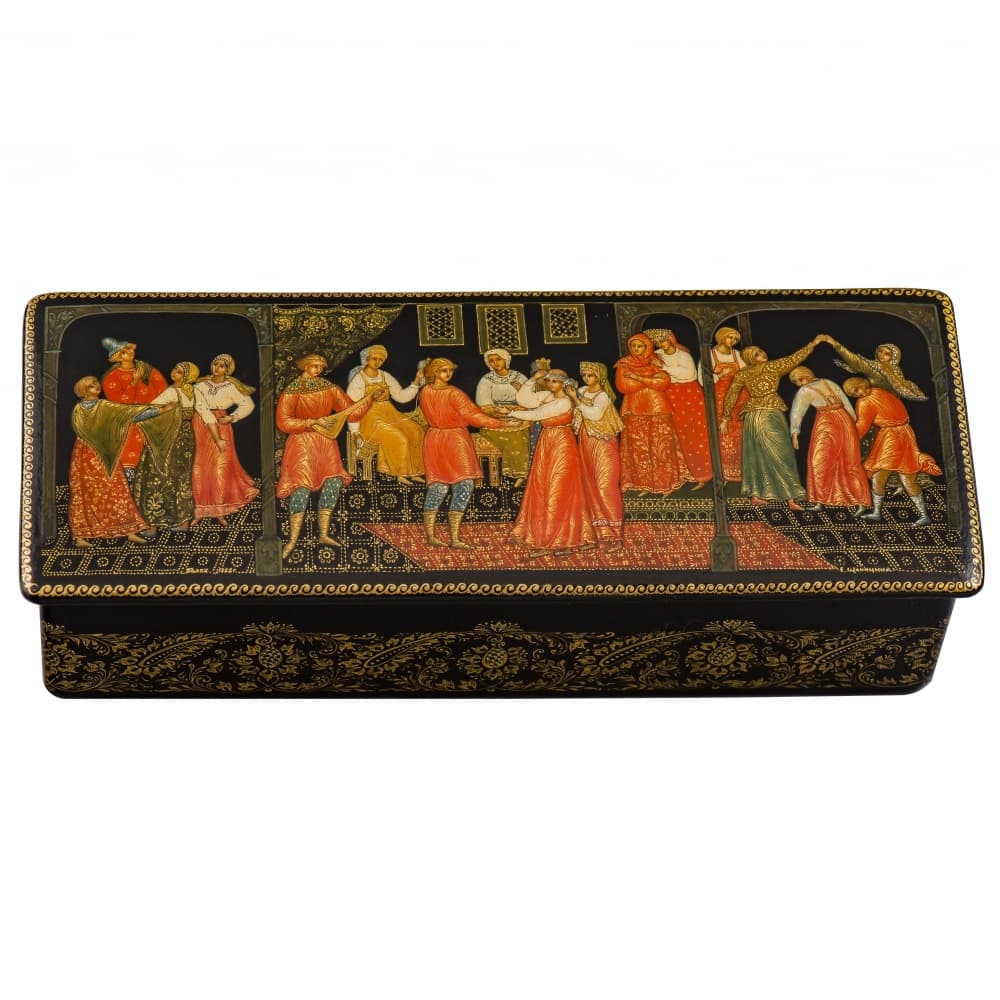 CASKET "SHE WHO GETS THE RING" WITH REMOVABLE LID 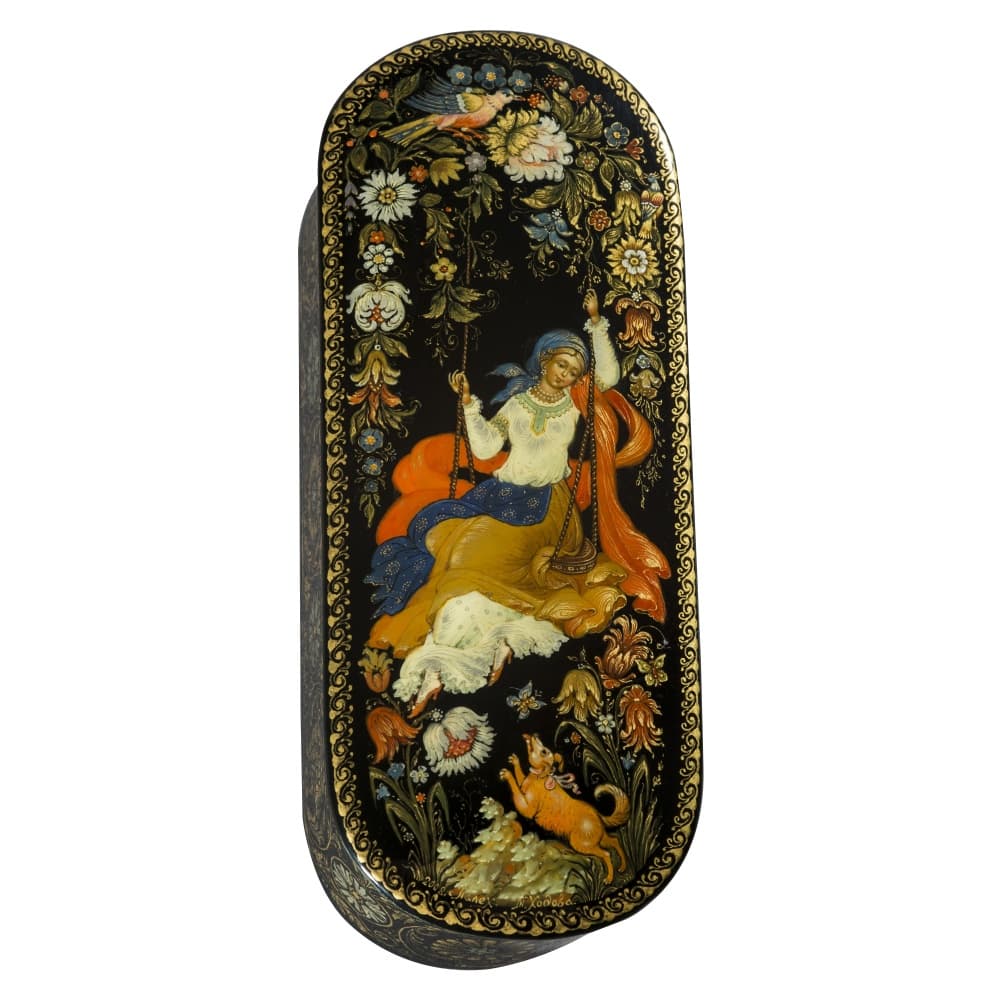 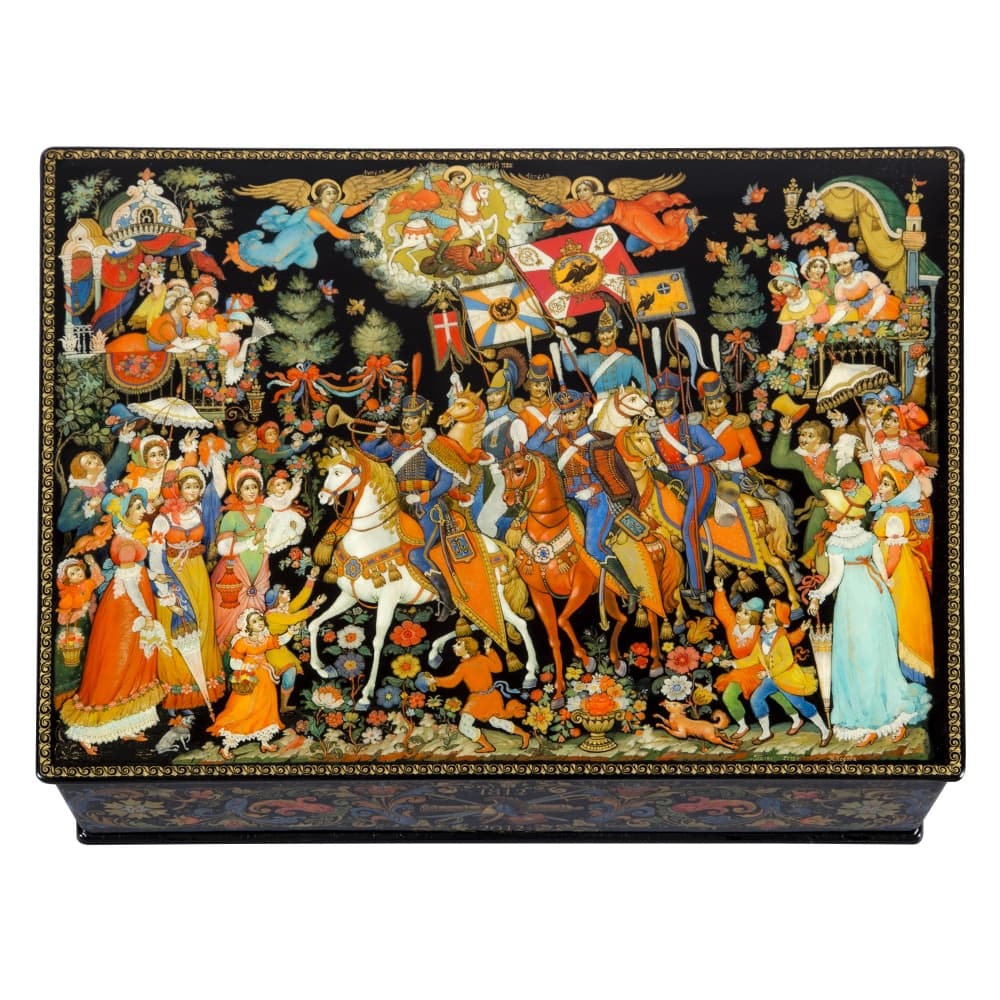 CHEST "WELCOMING THE VICTORS"
Feedback
Thanks! We have received your request and will contact you as soon as possible