The collection of Russian historical glass from the XVIII century to the beginning of the XX century consists of about 1500 items. These are primarily items from the Imperial Glassworks in St. Petersburg, as well as samples from private glassworks in various regions of the Russian Empire.

The first collection of Russian glass from the State Historical Museum (77 works from the XVIII – XIX centuries) was added to the Historical Glass Fund. Later the collection was replenished by private collections, such as the collections of artists A. Menaker and M. Mironov, a famous painter, graphic artist and caricaturist V. Lebedev, muralist N. Andronov and collector N. Rudnev, Moscow collectors V. Gerasimov, K. Danilov, V. Sitnikov, V. Menshikov, V. Klenov, collectors from St. Petersburg V. Holod and I. Ezrakh and others.

Among the earliest items in the museum collection are items made of simple untreated glass of natural green color, the so-called " simple matter ". Glassware was produced at state and private glassworks by the free blowing method from molten glass and decorated with molded harnesses, relief threads, and enamel paintings. Despite the simplicity of the material and form, this household utensil, widespread among Moscow's democratic classes, is a bearer of traditional Slavic culture with distinctive features of folk art. Often the items were decorated with bright paintings in the folk style – domestic scenes, biblical subjects, flowers, berries, and also birds. The most common image was the stork, which was considered "God's bird". A typical assortment of " simple matter" products of the XVIII century are kvassniks, flasks, bottles, jugs, shtof, half-stockpots. Also of interest are animalistic vessels in the shape of animals: bears, rams, horses and birds, designed as containers for liquids or table burners.

The museum's collection includes a variety of examples of engraved glass from the XVIII-XIX centuries. These are primarily gift trophies with emblems. The method of decorating glass items with engraving came to Russia in the XVII century from the Bohemian lands, was mastered and improved by Russian masters. In comparison with the Bohemian baroque heavy engraved glass, Russian products are notable for their lightness, subtlety and picturesqueness.

Thanks to the scientific development of M.V. Lomonosov, glass has acquired a bright and varied color palette.

There are unique objects in the collection - two-layered glasses by the master of the Nikolsko-Pestrovsky glassworks A. Vershinin, who developed a method of interglazed decoration, through which in a small space between the walls of the product it was possible to create a variety of landscapes and scenes from everyday life. Using special tools, the artist carefully laid out and fixed the details of the future image on the walls, using dried leaves, grass, flowers, twigs, moss, straw, colored paper and threads, as well as foil. Until today, it remains a mystery how the master attached them to the glass and folded them into a picture.

Products made of crystal appeared in the first half of the XIX century. The range of crystal items varies from items for serving the table to decorative items intended for decoration of ceremonial interiors.

The Historical Glass Foundation possesses works of various kinds of artistic finishes representing different time periods such as Renaissance, Baroque, Gothic, Empire, Art Nouveau, Russian and Pseudo-Russian styles. Technological specifics of manufacturing us to refer them to a certain production, authorship and period. Products of the Imperial St. Petersburg Glassworks, Izmailovsky, Nikolsky-Pesterovsky (Bakhmetevsky), Dyatkovsky, Gusevsky, Maltsovsky and other famous Russian glassworks represent an unusually wide range of technological and artistic abilities of glassmakers. Products of the Imperial Glassworks, the main glassworks in Russia, were often made according to the designs of famous architects and decorated the interiors of the capital's palaces and suburban residences of members of the imperial family and the highest aristocracy.

The Museum's collection of Russian historical glass demonstrates stages in the development of Russian glasswork and its high technical and artistic level that is on a par with world standards. 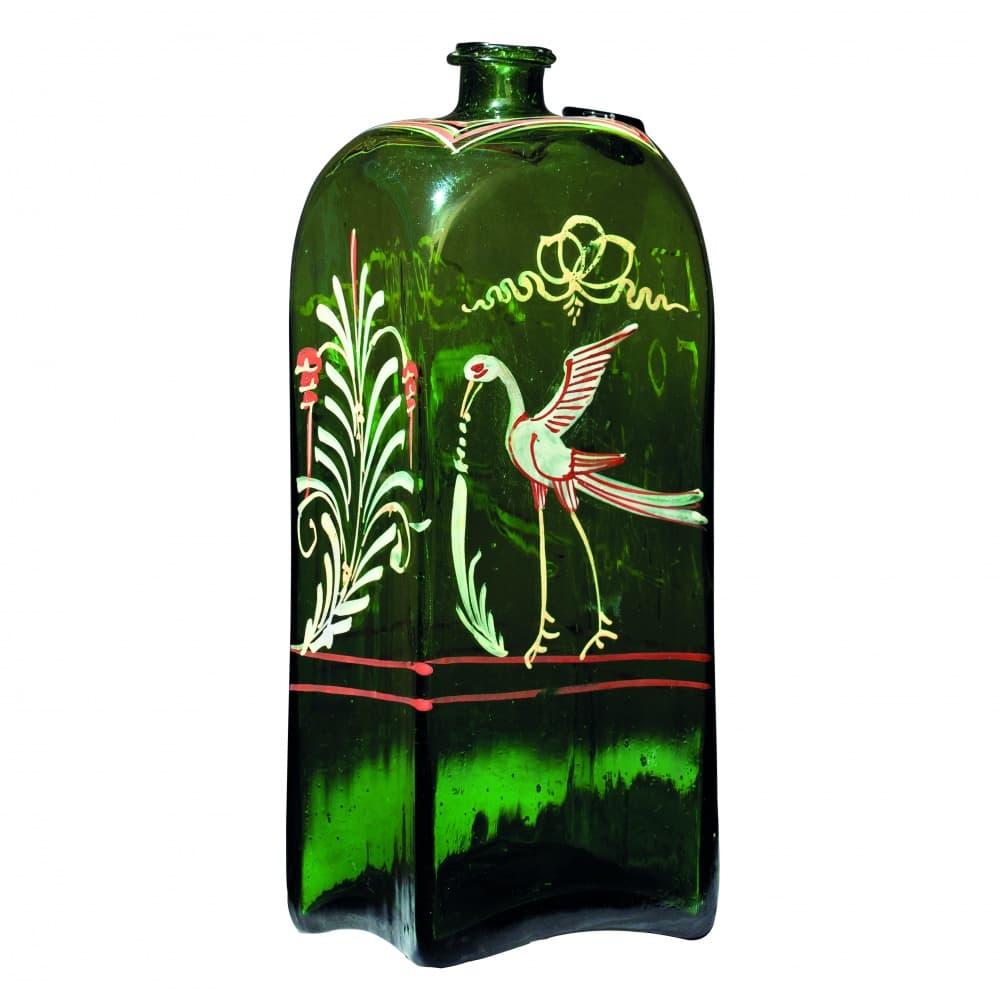 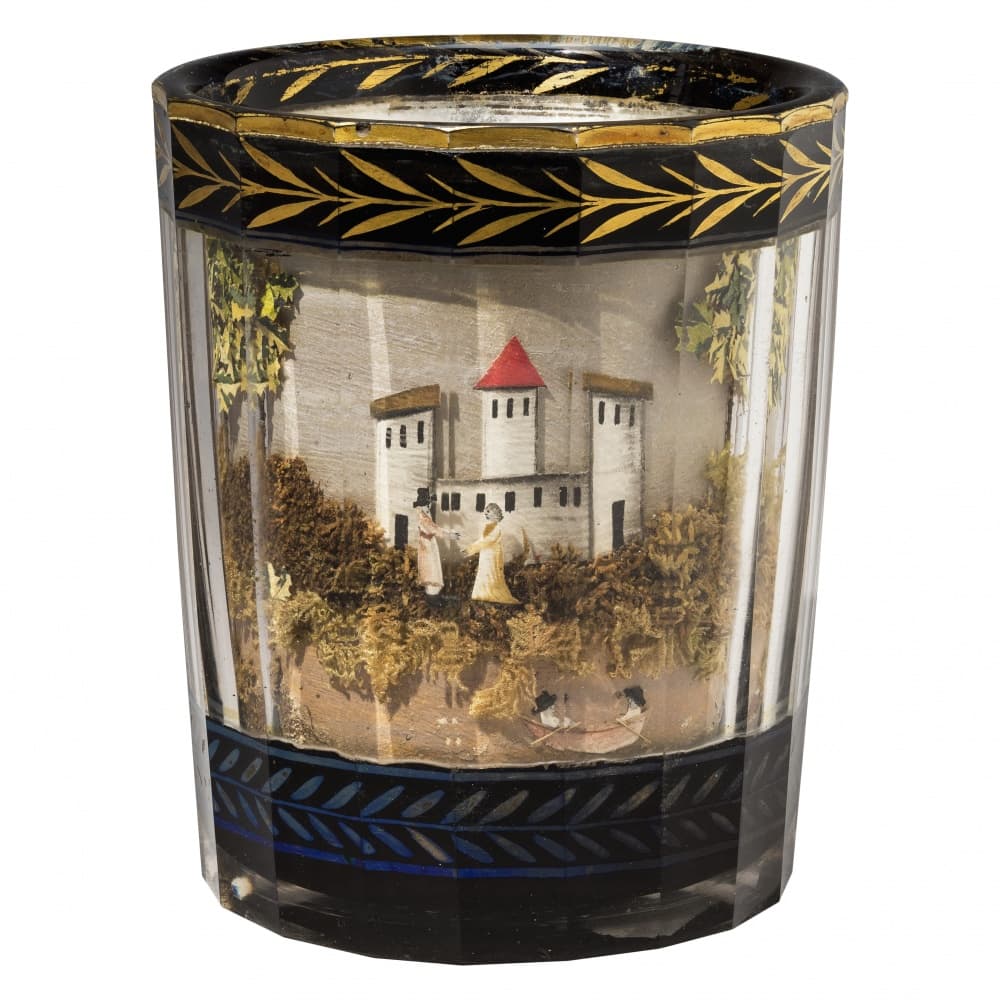 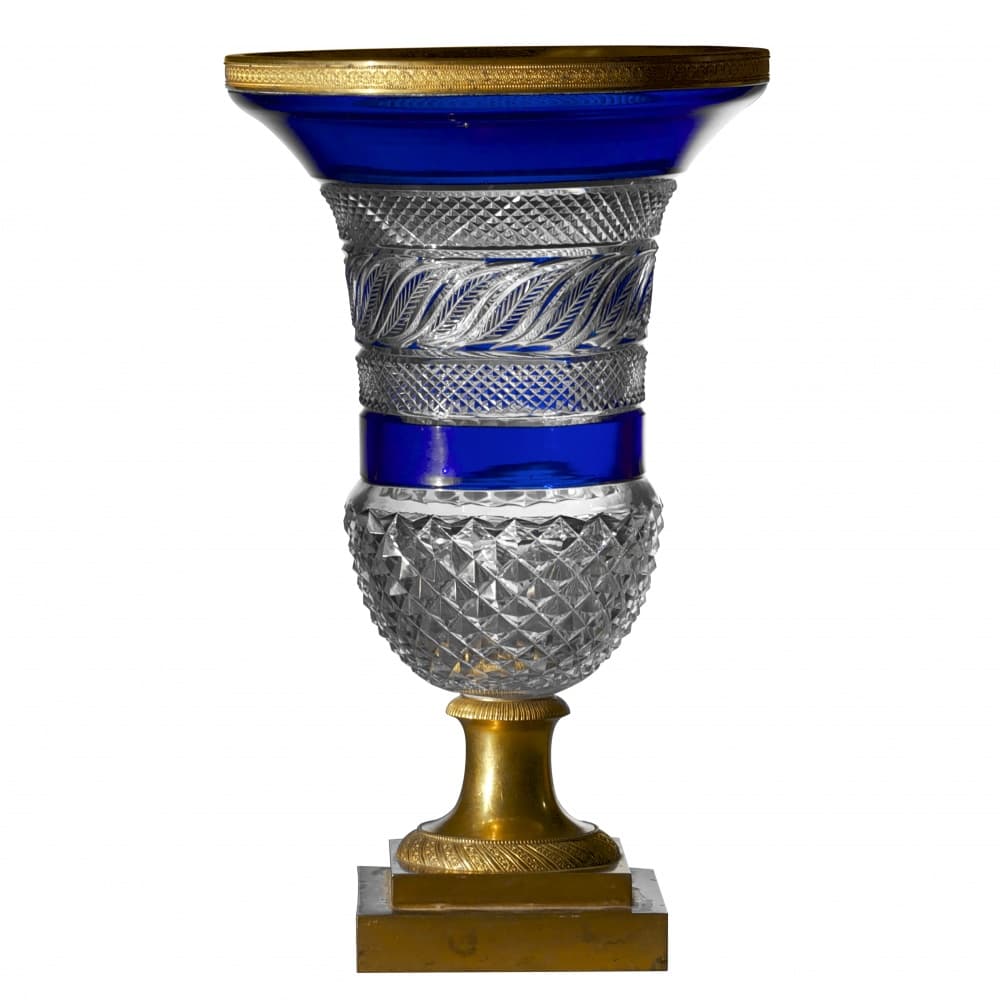 DECORATIVE VASE IN A BRONZE FRAME ON A SQUARE BASE 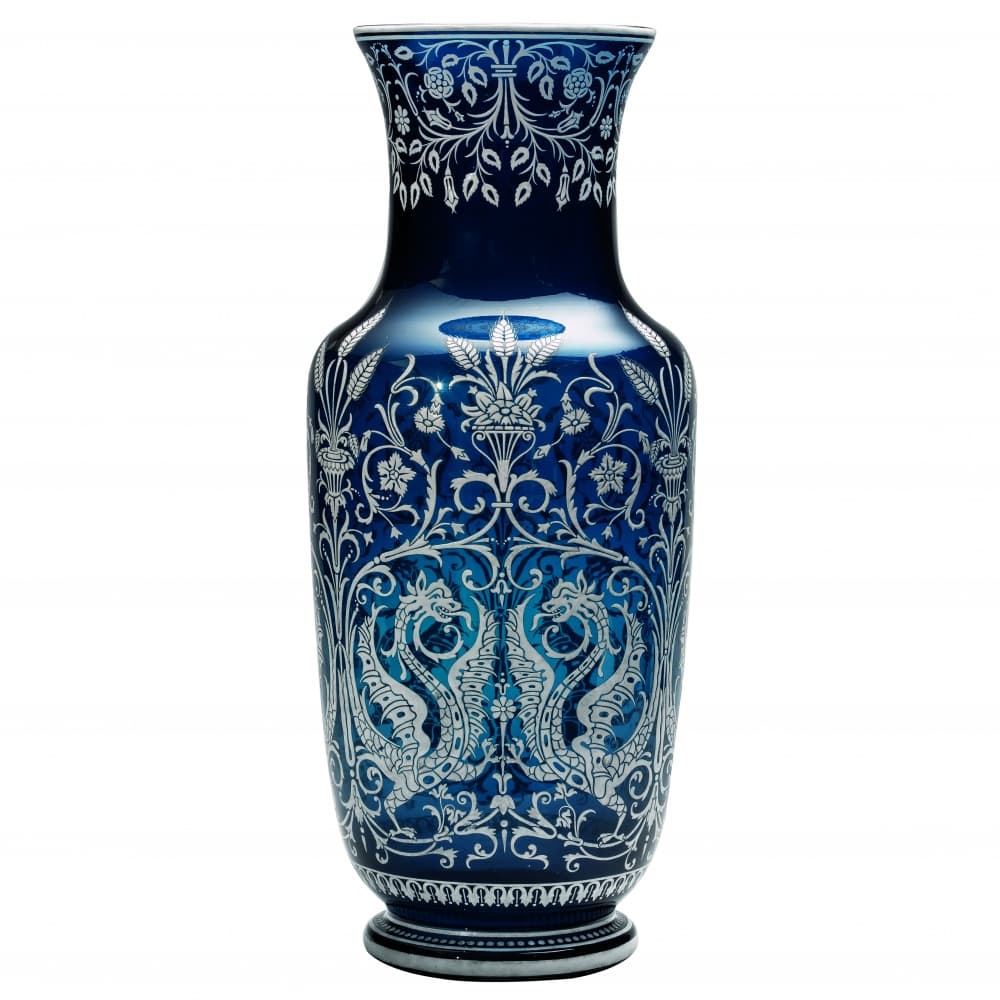 DECORATIVE VASE IN "CHINESE STYLE" WITH DEPICTION OF DRAGONS 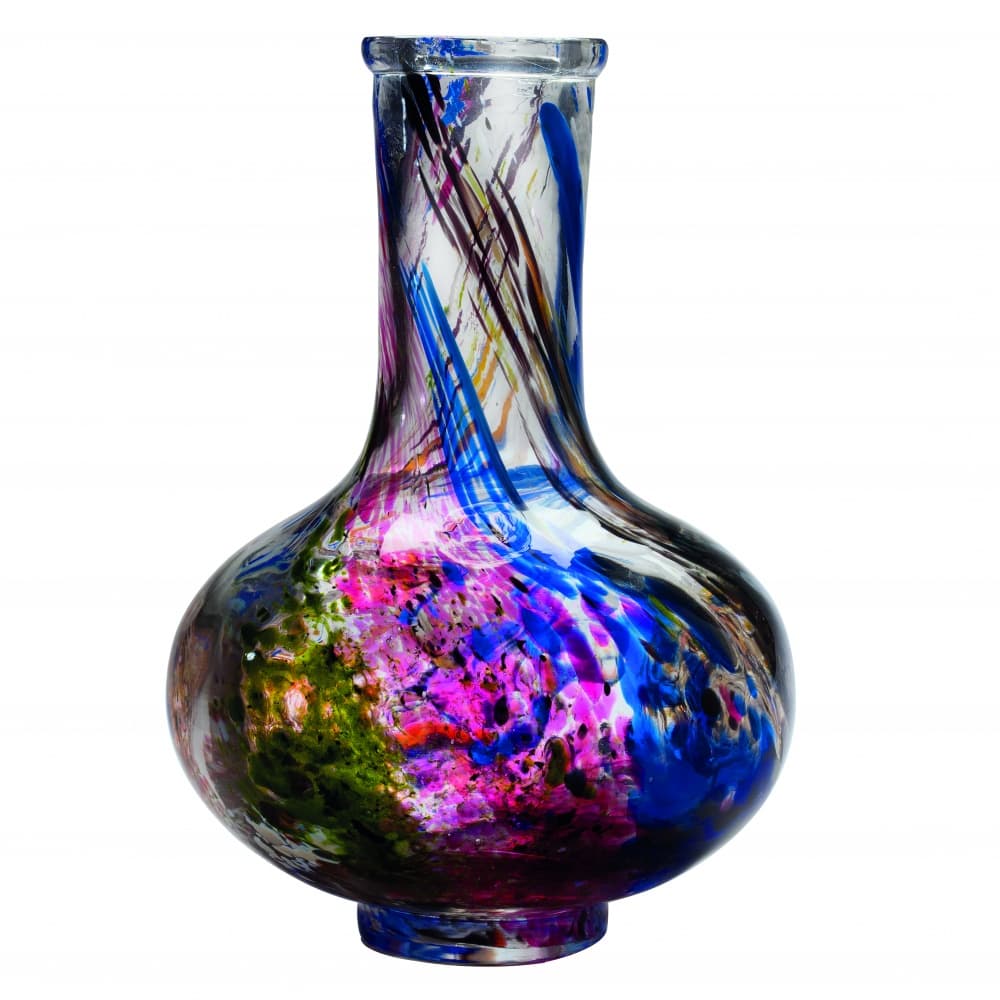 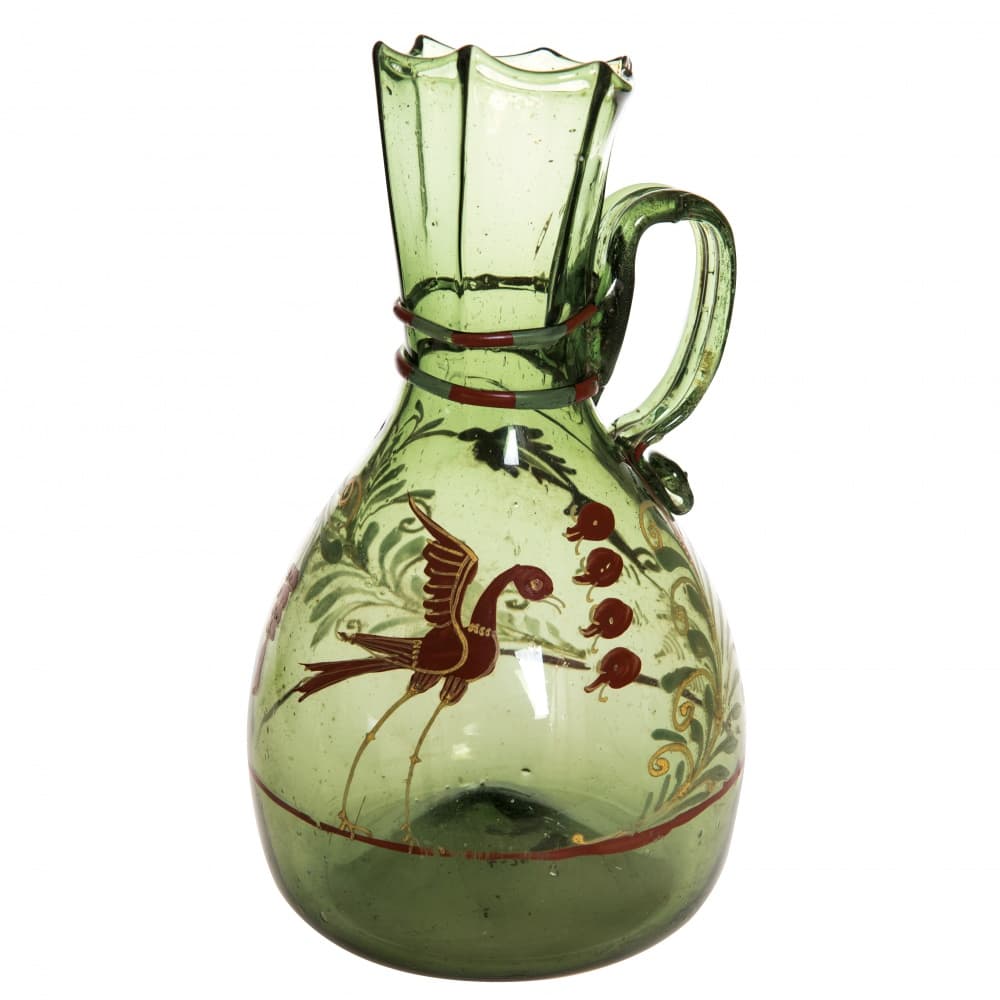 JUG WITH STORK AND FLOWER BRANCHES 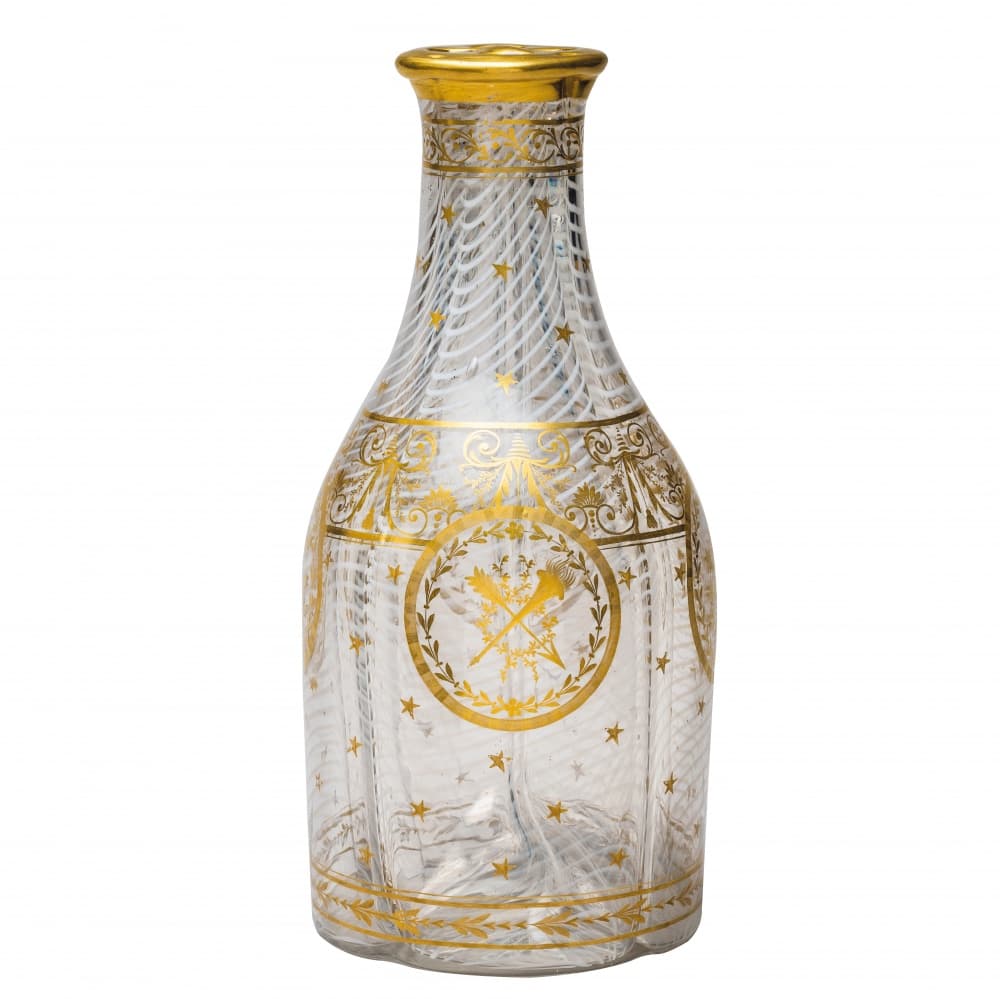 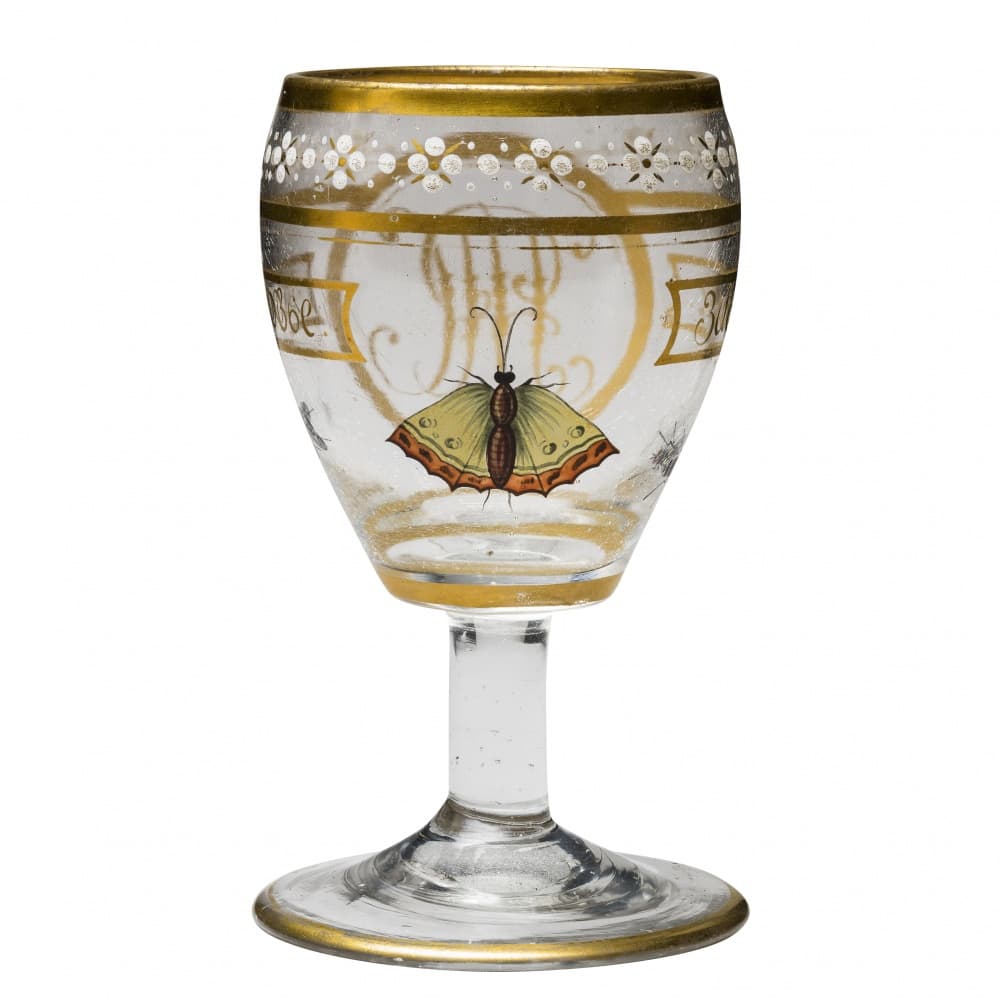 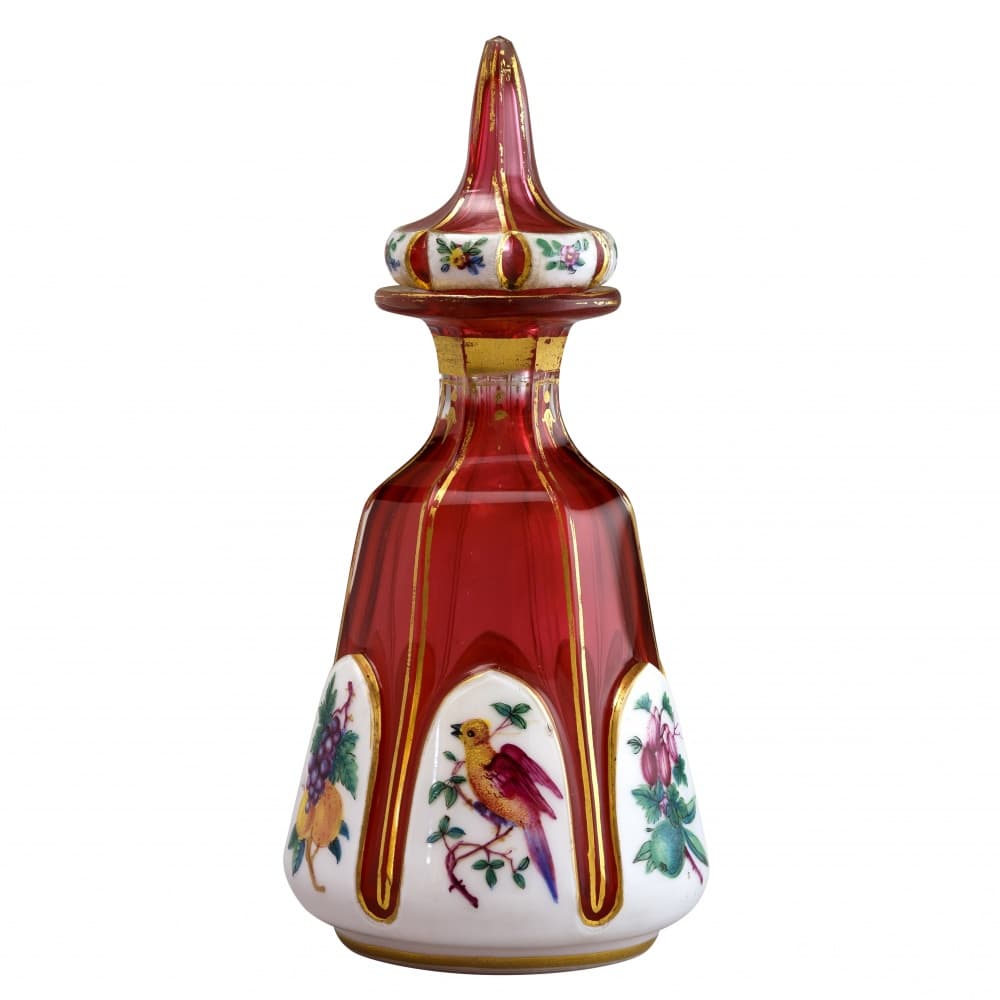 BOTTLE DEPICTING OF BIRDS AND FLOWERS (WITH CORK) 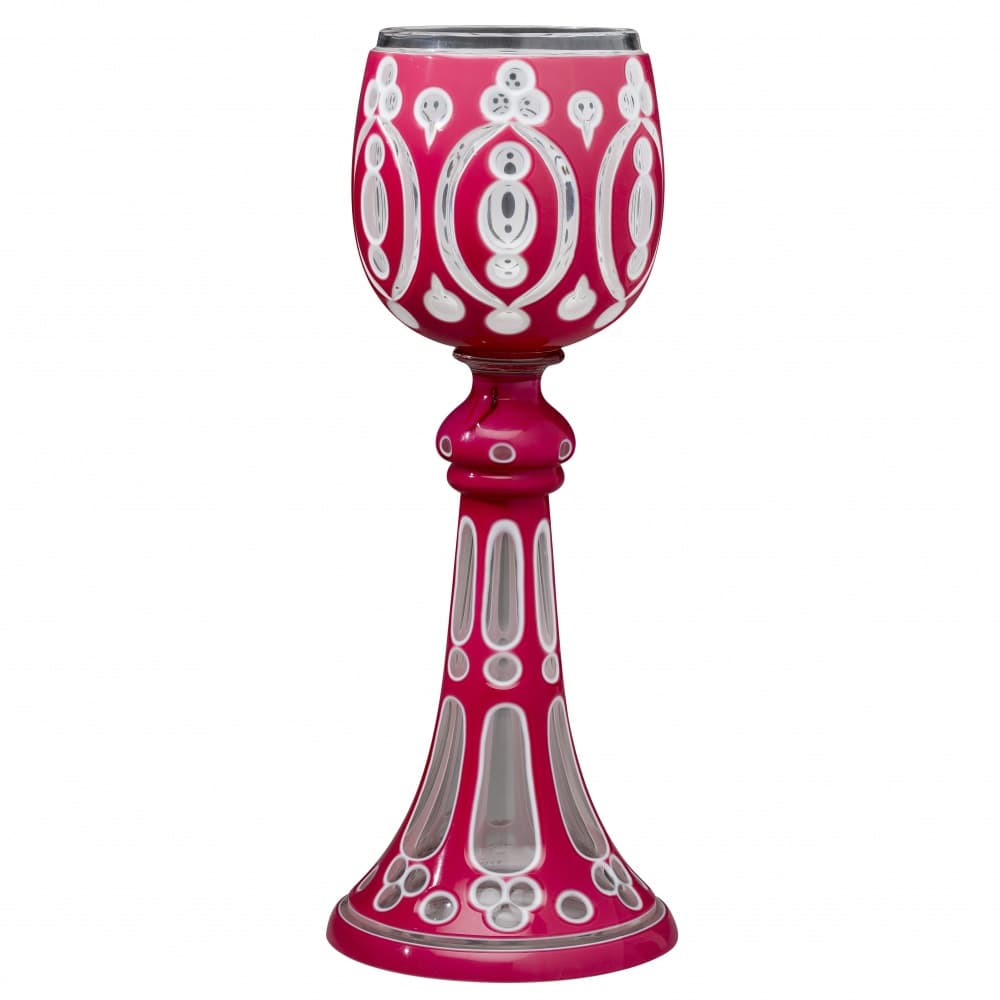 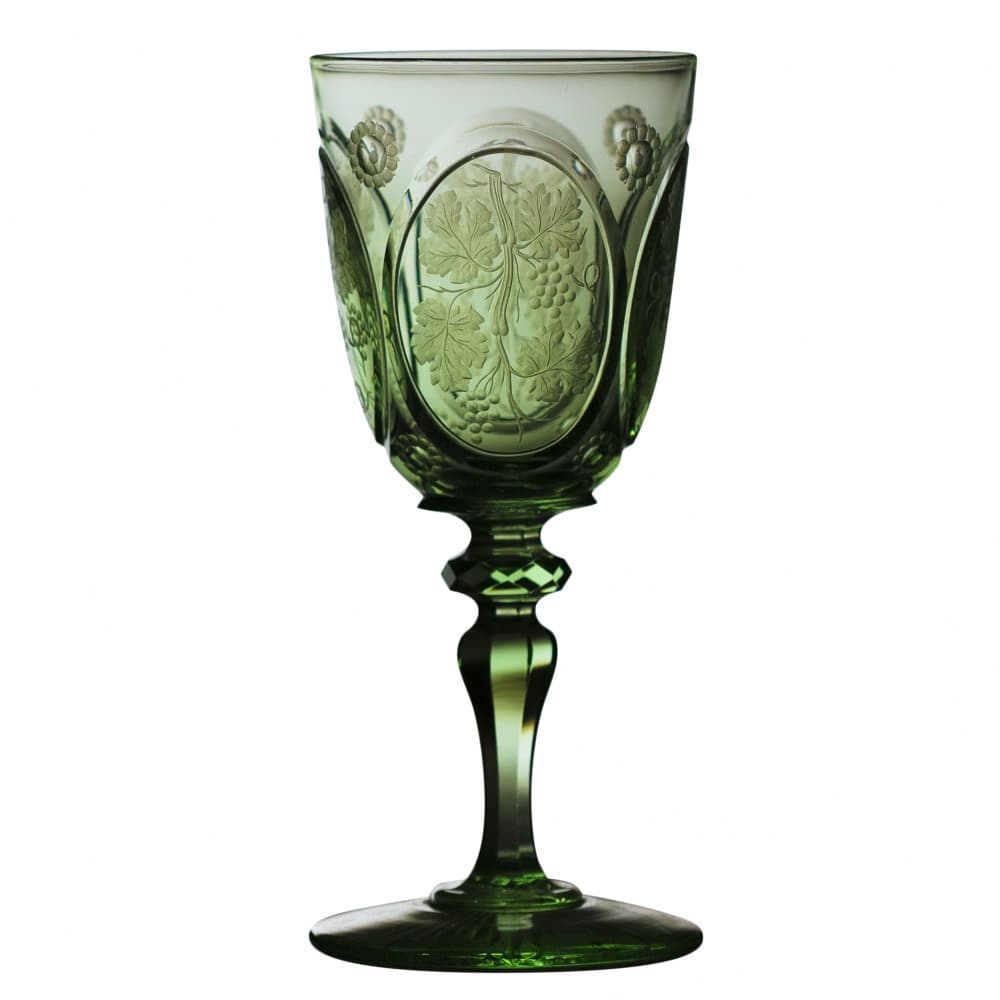 A GLASS FROM THE "LONDON" SERVICE 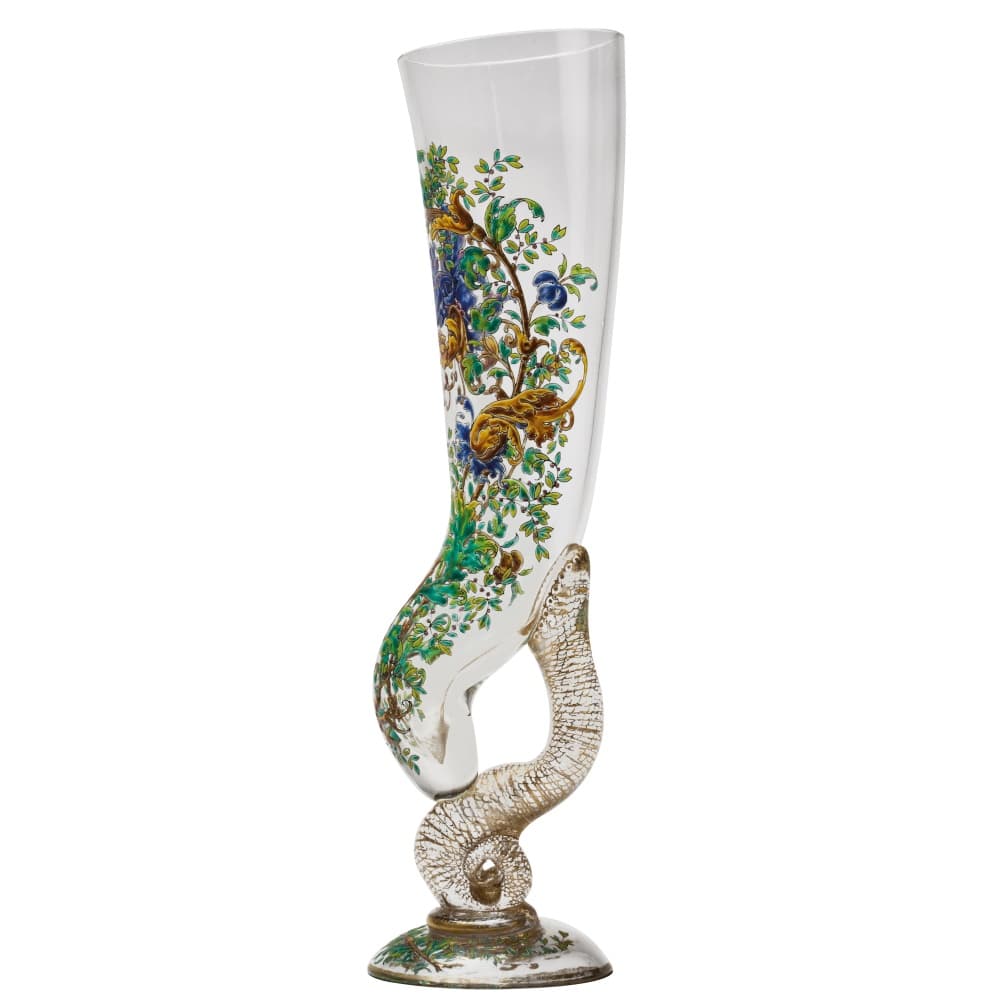 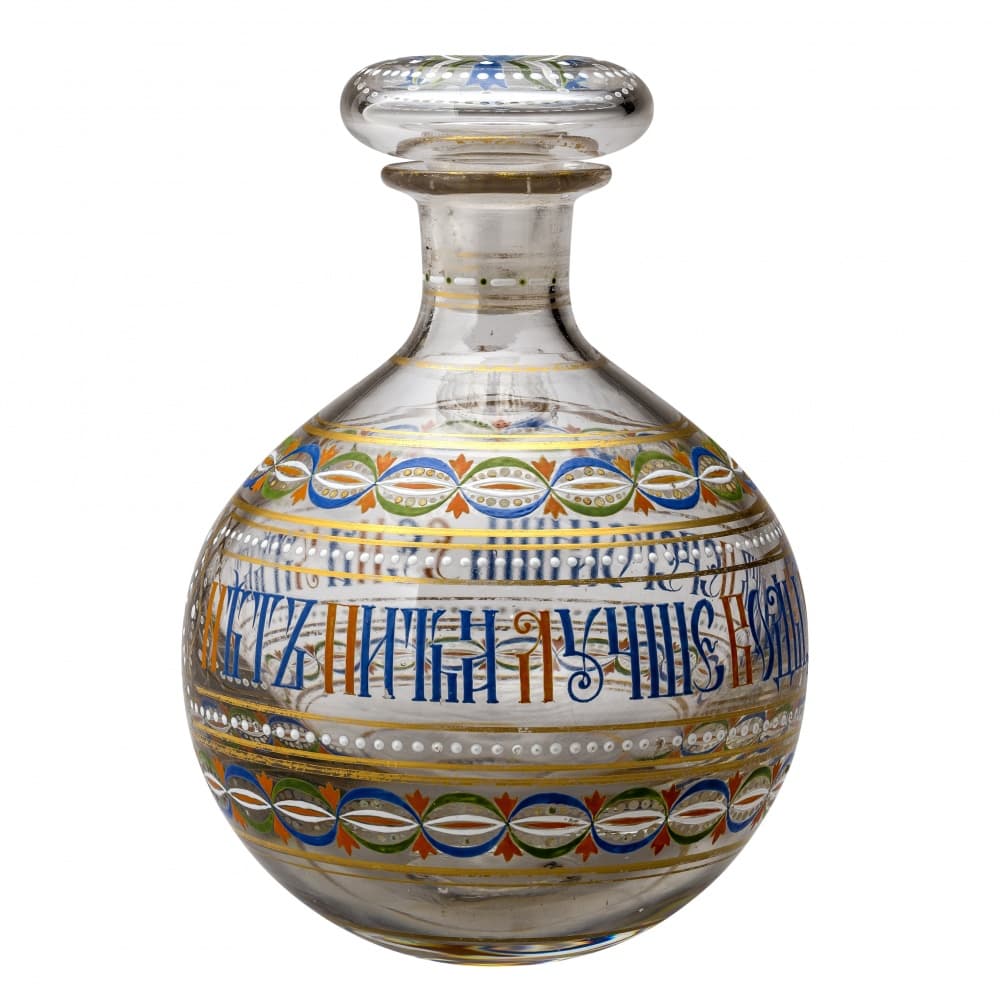 VASE WITH PICTURES OF LOACHES
Feedback
Thanks! We have received your request and will contact you as soon as possible