Production of porcelain in Russia was set up in the middle of the XVIII century. The famous Imperial Porcelain Factory in St. Petersburg was founded in 1744 and a little later, in 1766, the first private porcelain enterprise - the factory of F.Y.Gardner. The XVIII century porcelain collection includes selected pieces from famous palace sets, such as the "Kabinet" (IPF) and the so-called "Order sets": St. George, St. Andrew, St. Alexander, and St. Vladimir (manufactured by order of the Imperial Court at the factory of F.Y. Gardner), intended for gala dinners in honour of each of the named orders with a picture of their distinctive emblems. The collection also includes a number of small objects, in particular, sculptures from the "Peoples of Russia" series, made after the models of the sculptor J.-D. Rachette (IPF).

The Production of porcelain reached its peak by the middle of the XIX century, when in different provinces of Russia appears a number of private porcelain factories. The Most famous were the factories of A.G.Popova, A.T. Safronova (Moscow province) and brothers Bateninov (St.-Petersburg), founded in the first third of the XIX century, A.M.Miklashevsky and the brothers Kornilov, appeared later, in the 1830s. By the end of the century the majority of the remaining private porcelain factories entered into the "Partnership M.S. Kuznetsova". This period in the collection of the Museum is most fully represented by a number of works, which have no analogues in other Museum collections: plates with exotic birds (plant brothers Novy, 1820-ies), set with scenes from peasant life (plant F.Y. Gardner, 1820s), paired vases with views of Tsarskoye Selo (factory of the Batenin brothers, first third of the 19th century), ornamental floral set with butterflies (factory of A.T. Safronov, 1830s - 1840s), a vase with handles in the form of dolphins (Andrey Popov's factory, mid 19th century), a unique set with floral paintings and a cup with a female portrait (the factory of Prince Nikolai Yusupov in the estate of Arkhangelskoye, 1820s).

Of most interest is the collection of porcelain in the Russian style. Among the early works of the Russian style are items from the Imperial Porcelain Factory designed by architect F.G. Solntsev, in particular from the set that belonged to Grand Duke Konstantin Nikolayevich.

The Russian style is also represented in the collection by a number of magnificent pieces from private porcelain factories. The collection includes items from the Kornilov Brothers' St. Petersburg factory, including a "Tet-a-tet" set which is known to exist in a single copy, and also two plates from a series based on Russian fairy tales, both decorated after drawings by the artist Ivan Bilibin ("Ivan the Tsarevich and the Frog" and "The Black Knight", 1901 - 1903). Several more plates painted according to sketches of the artist Elizaveta Böhm, known for his watercolors and drawings for postcards, as well as objects with a grotesque painting by the artist N.N. Karazin.

Among the works made in the Art Nouveau style, the most interesting is one of the two famous examples of a vase with dolphins (the other is in the State Hermitage Museum), as well as two vases with overglaze and underglaze landscape painting by one of the most prominent artists of the IPF from the early 20th century, G.D. Zimin. 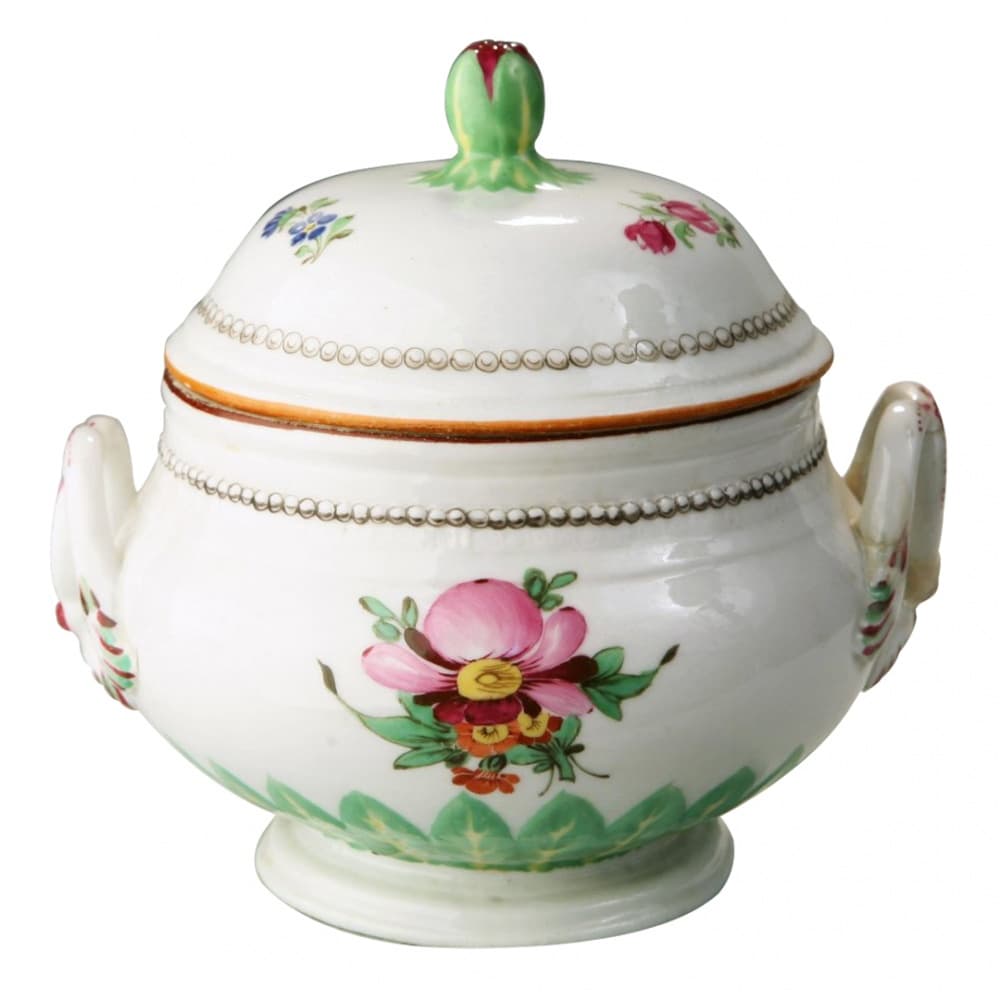 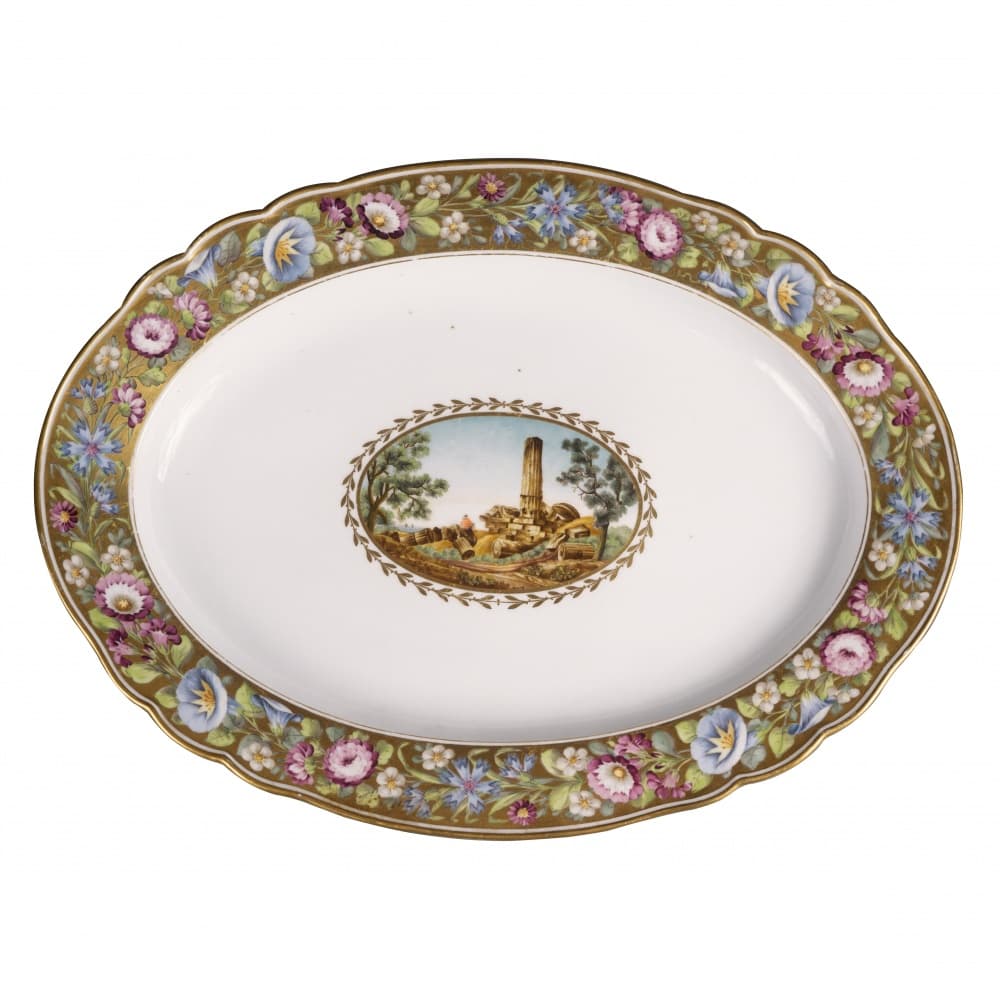 AN OVAL DISH FROM THE CABINET SET 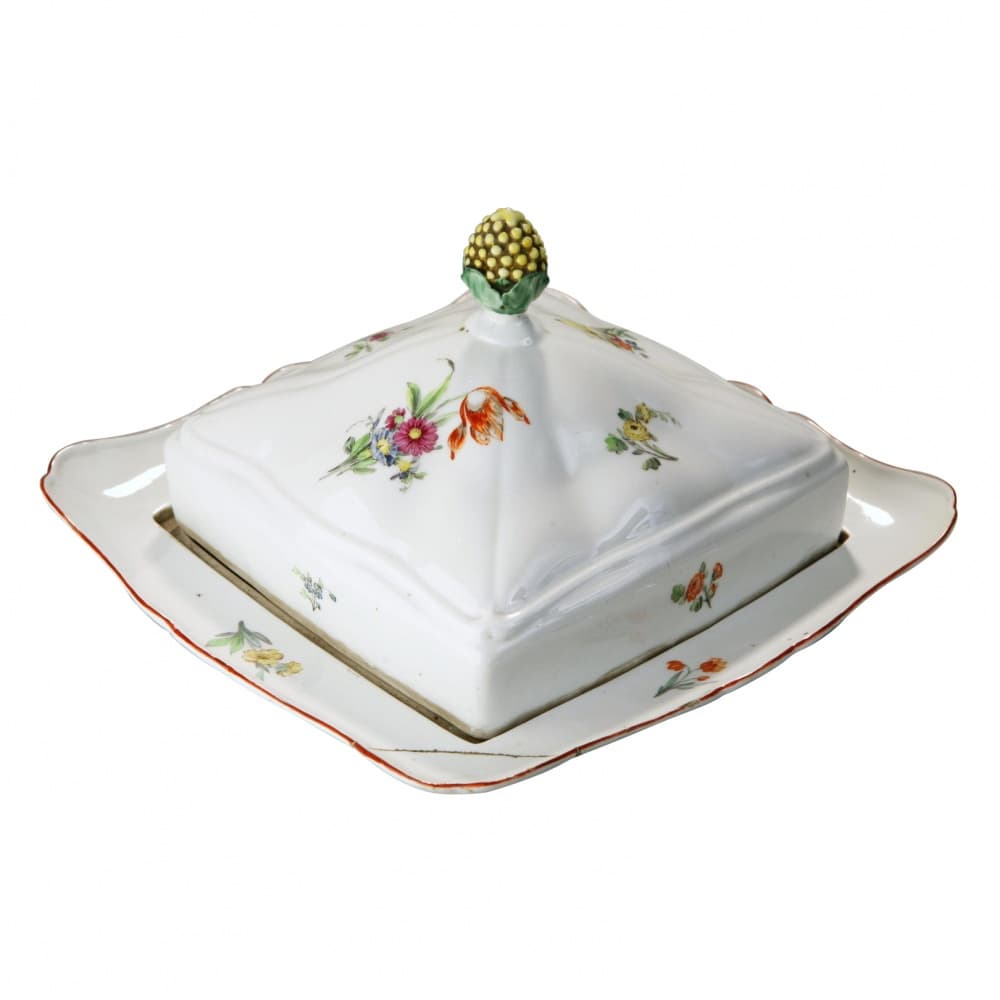 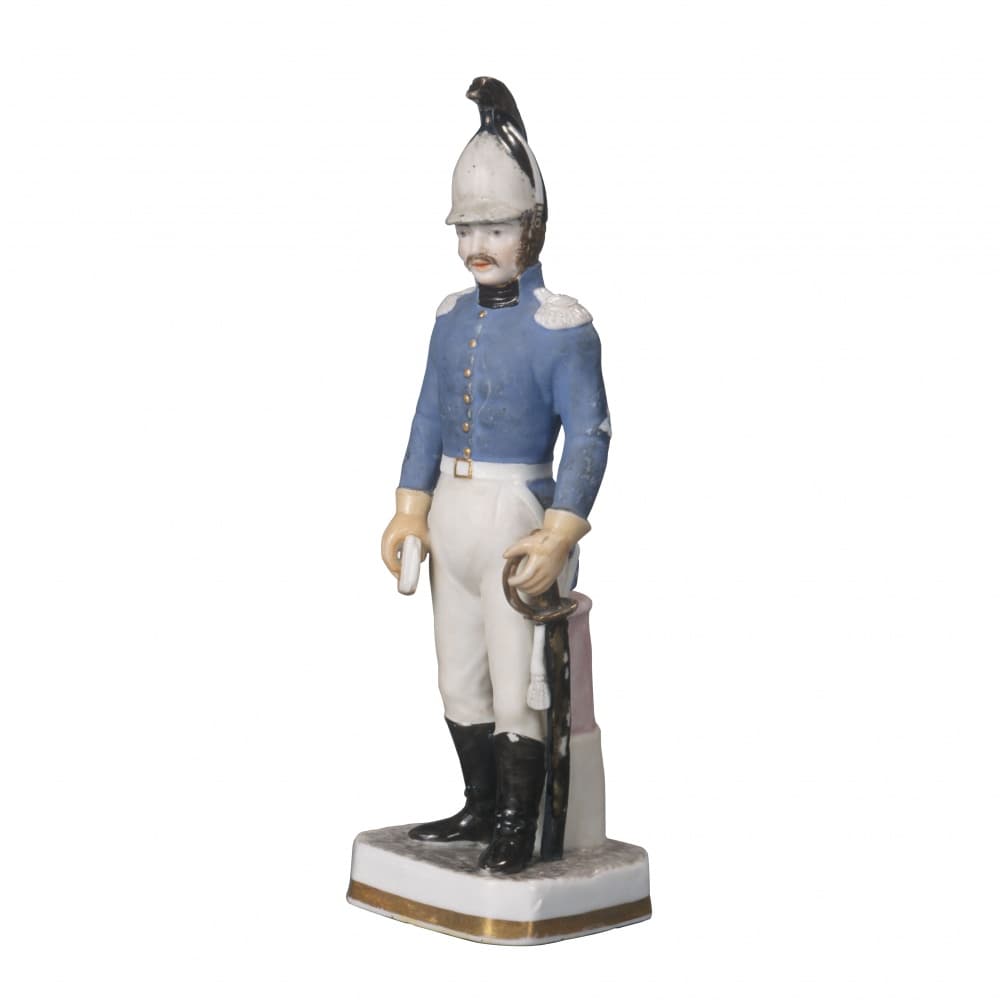 PLATE DEPICTING A BIRD OF PARADISE 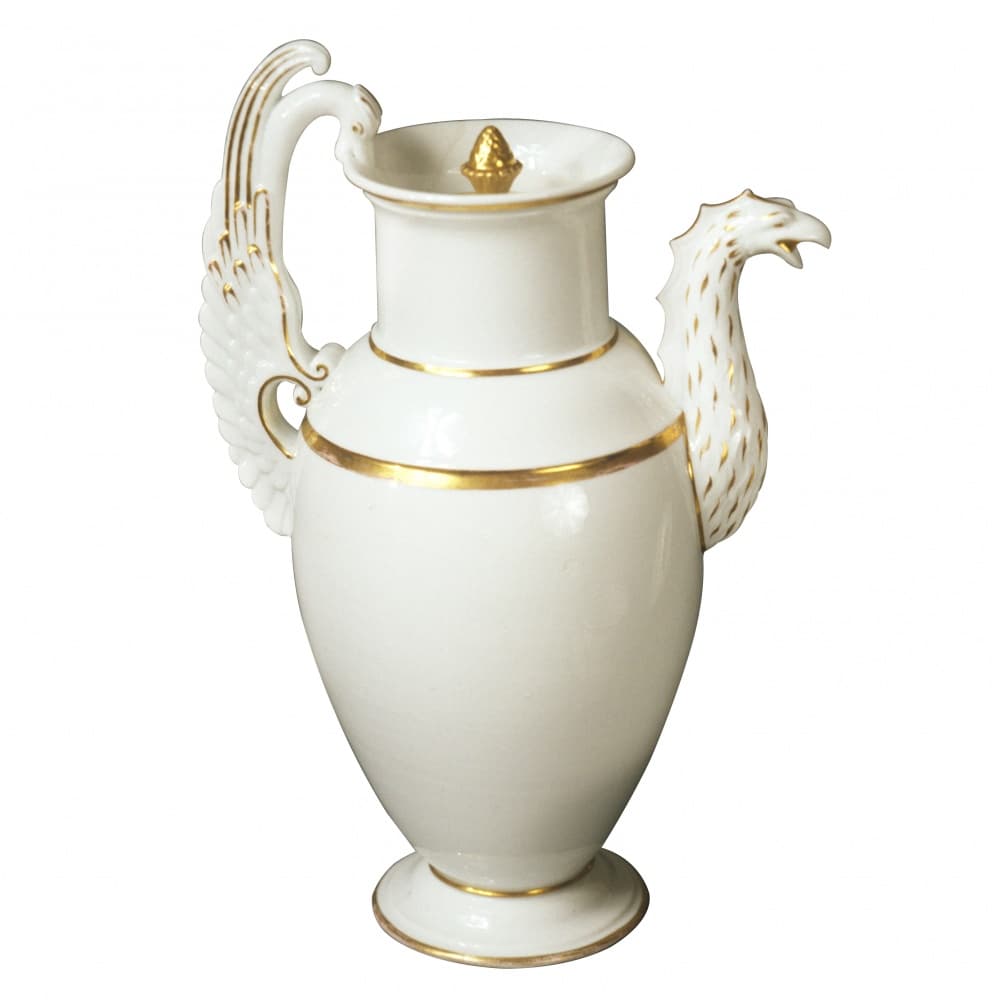 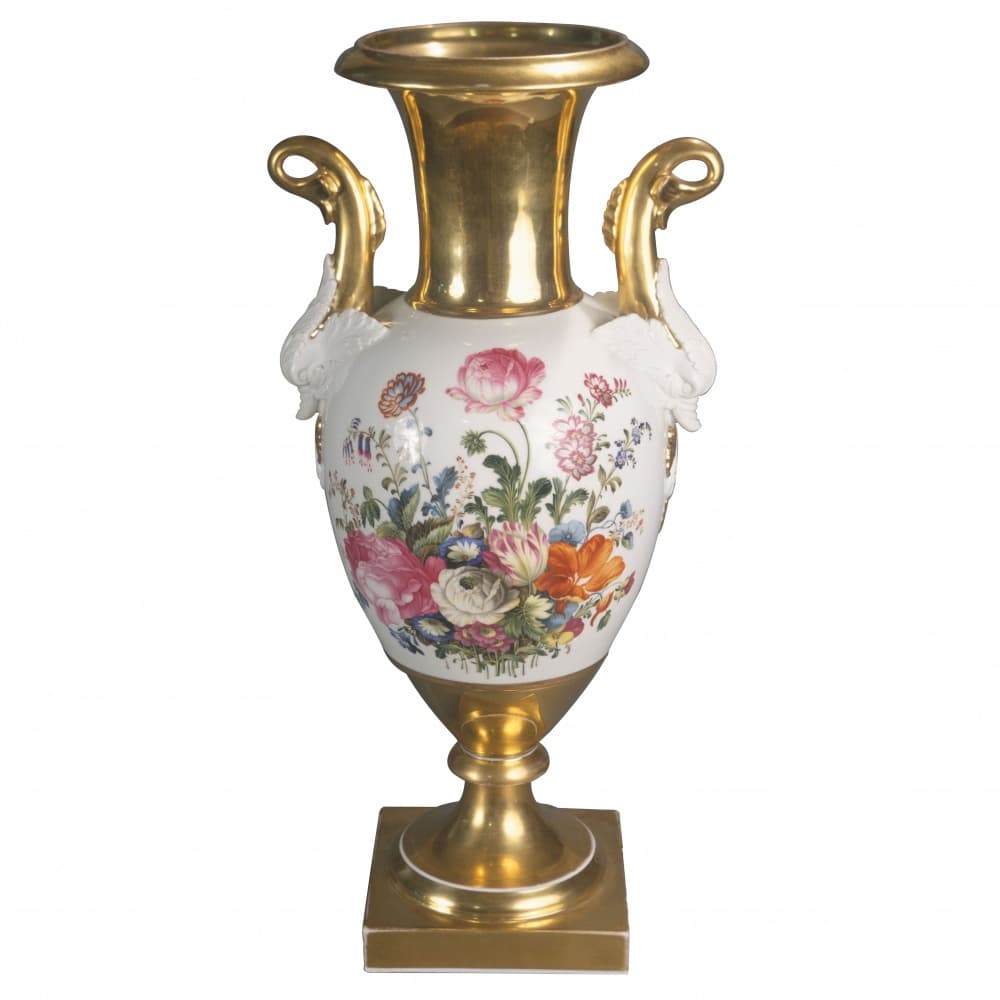 VASE PAINTED WITH FLOWERS AND HANDLES IN THE FORM OF DOLPHINS 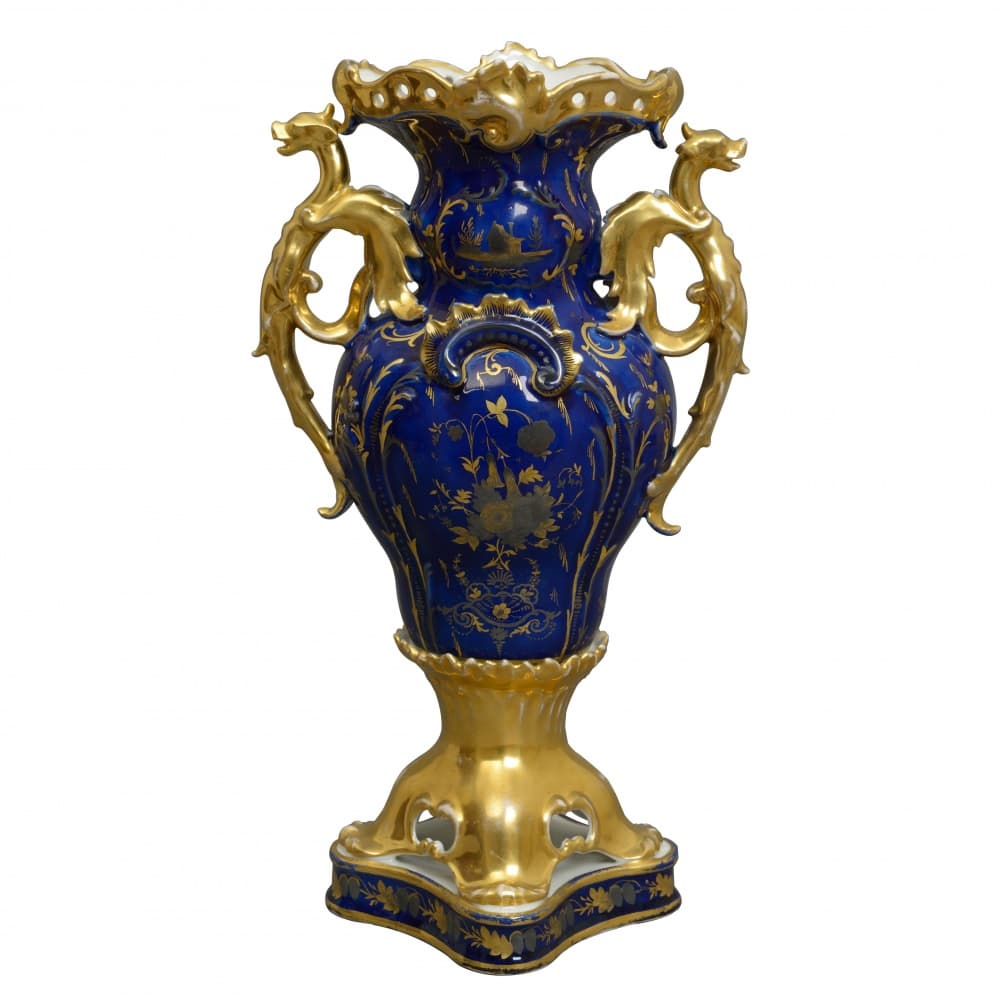 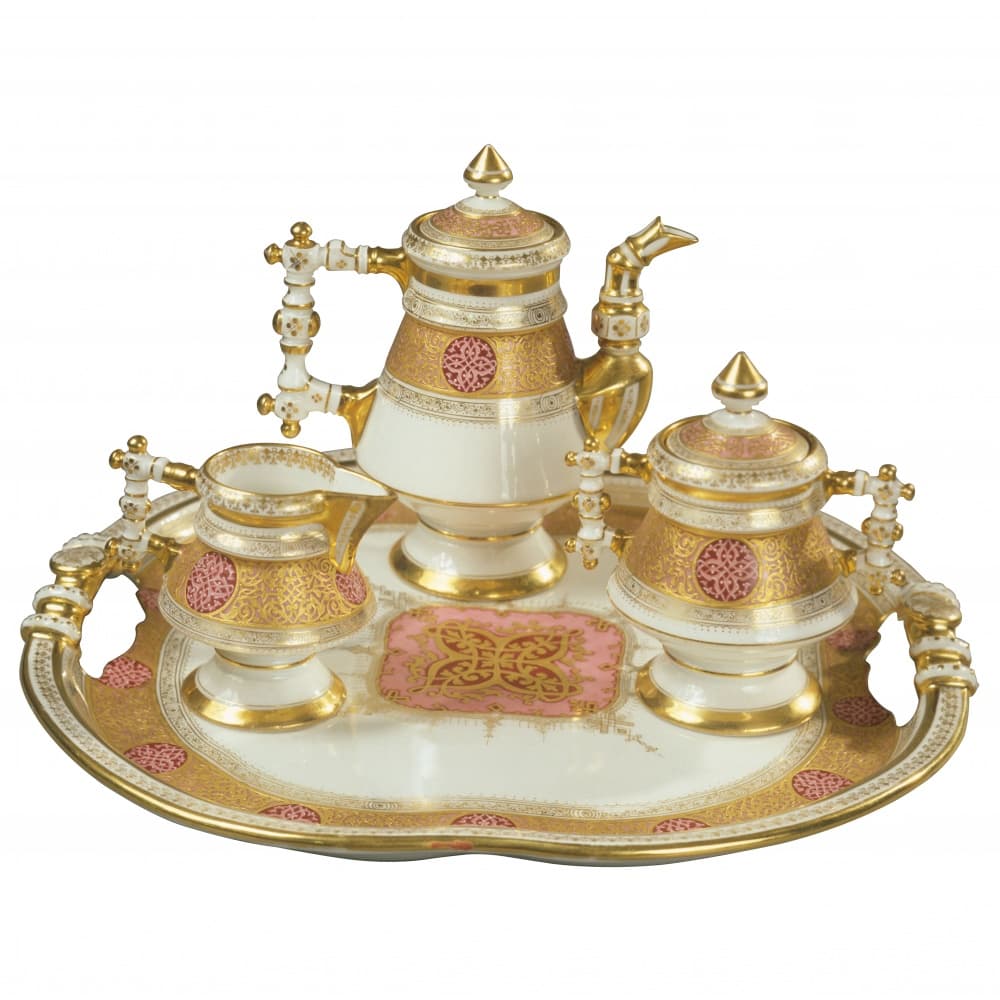 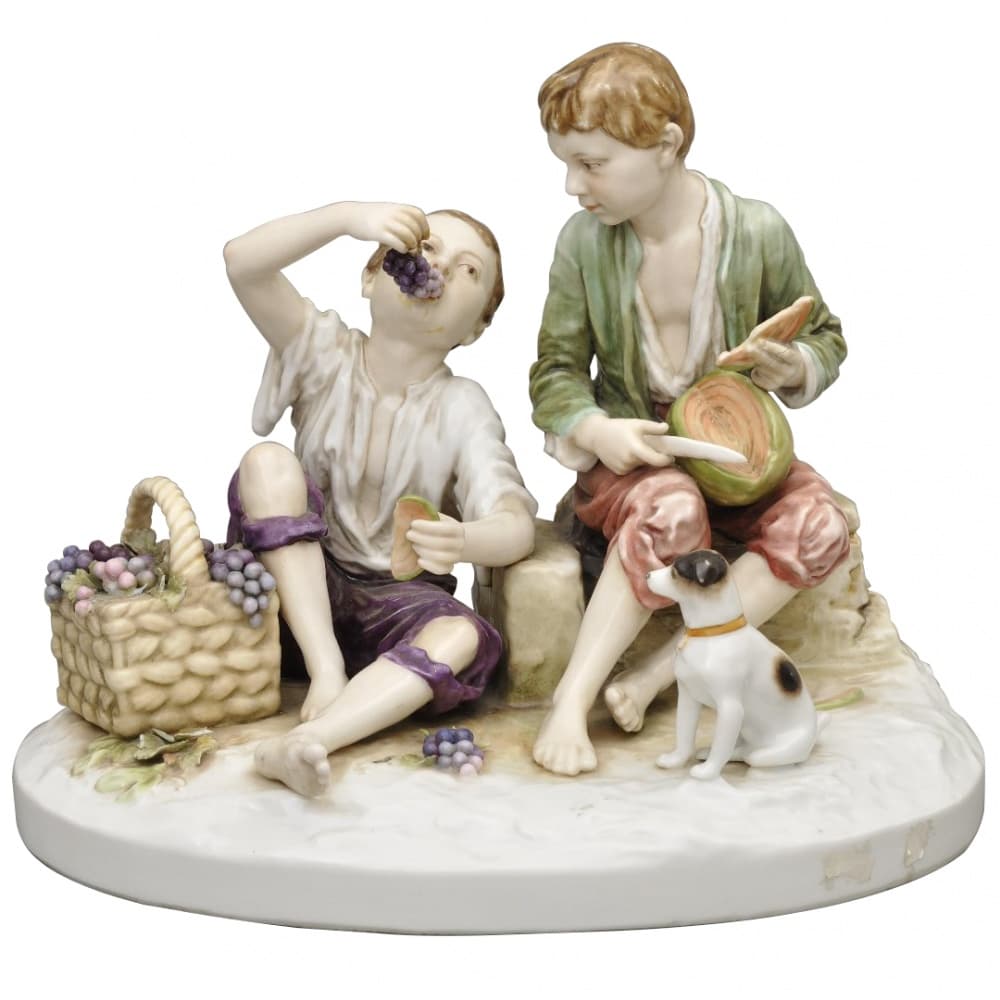 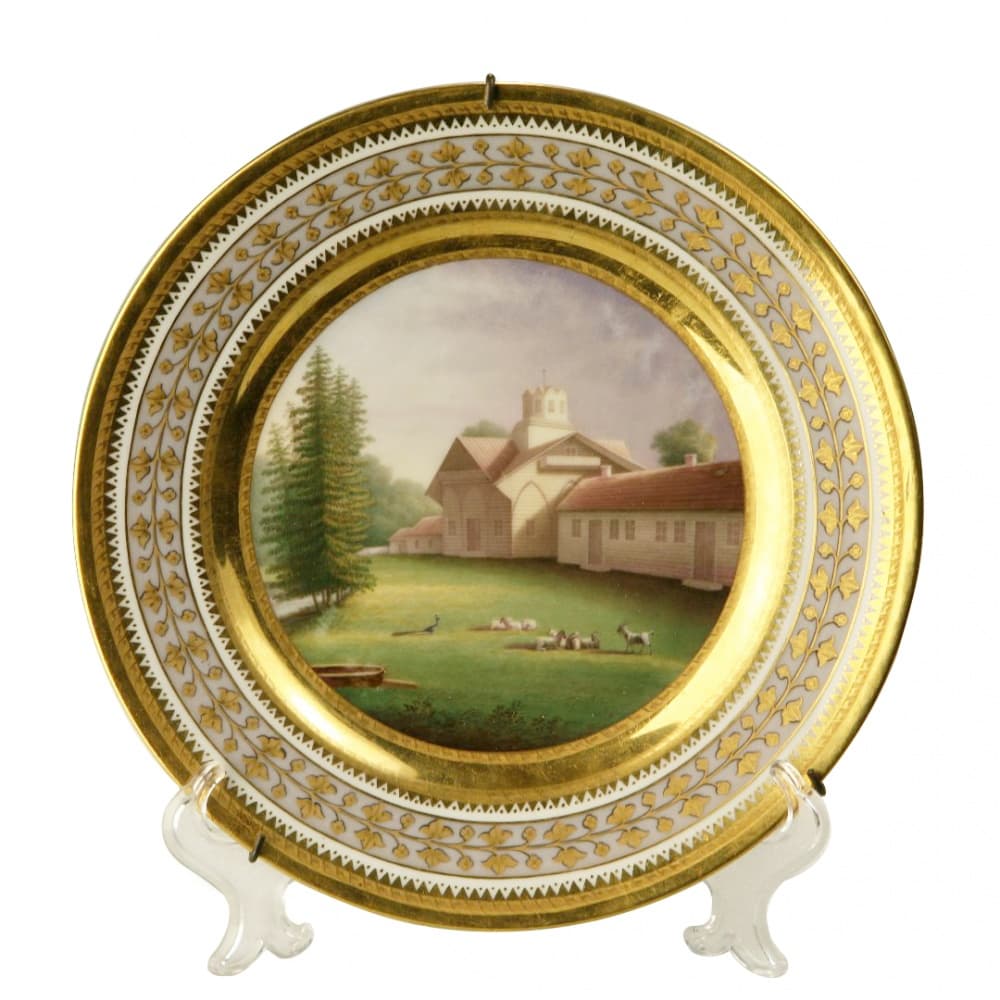 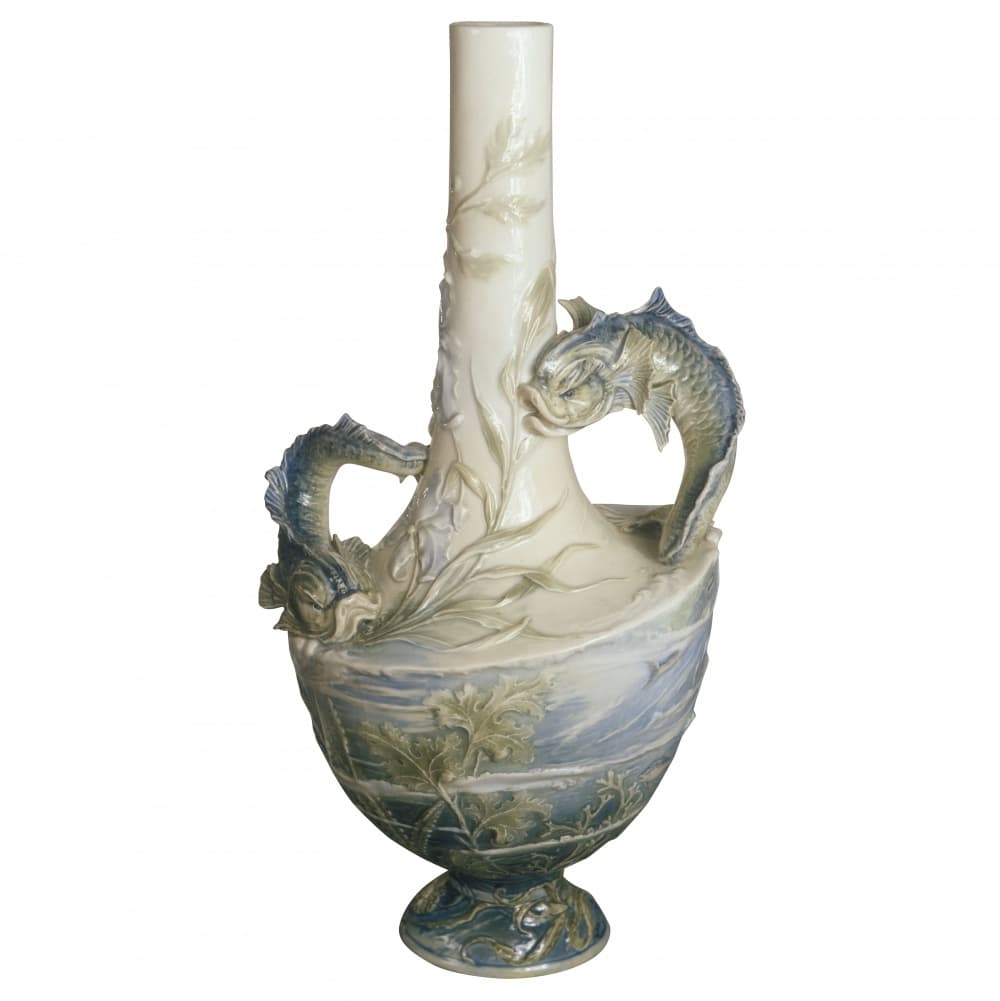 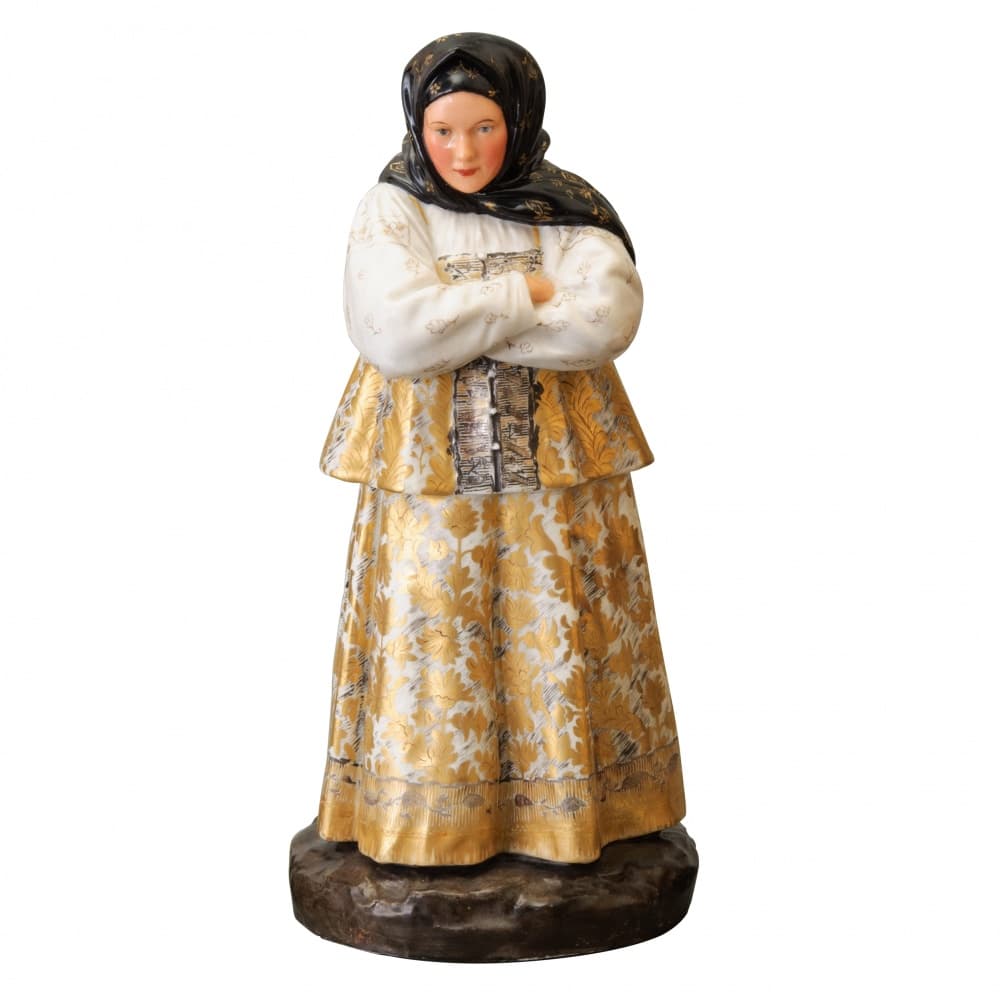 "ARKHANGELSK WOMAN" SCULPTURE FROM THE "PEOPLES OF RUSSIA" SERIES 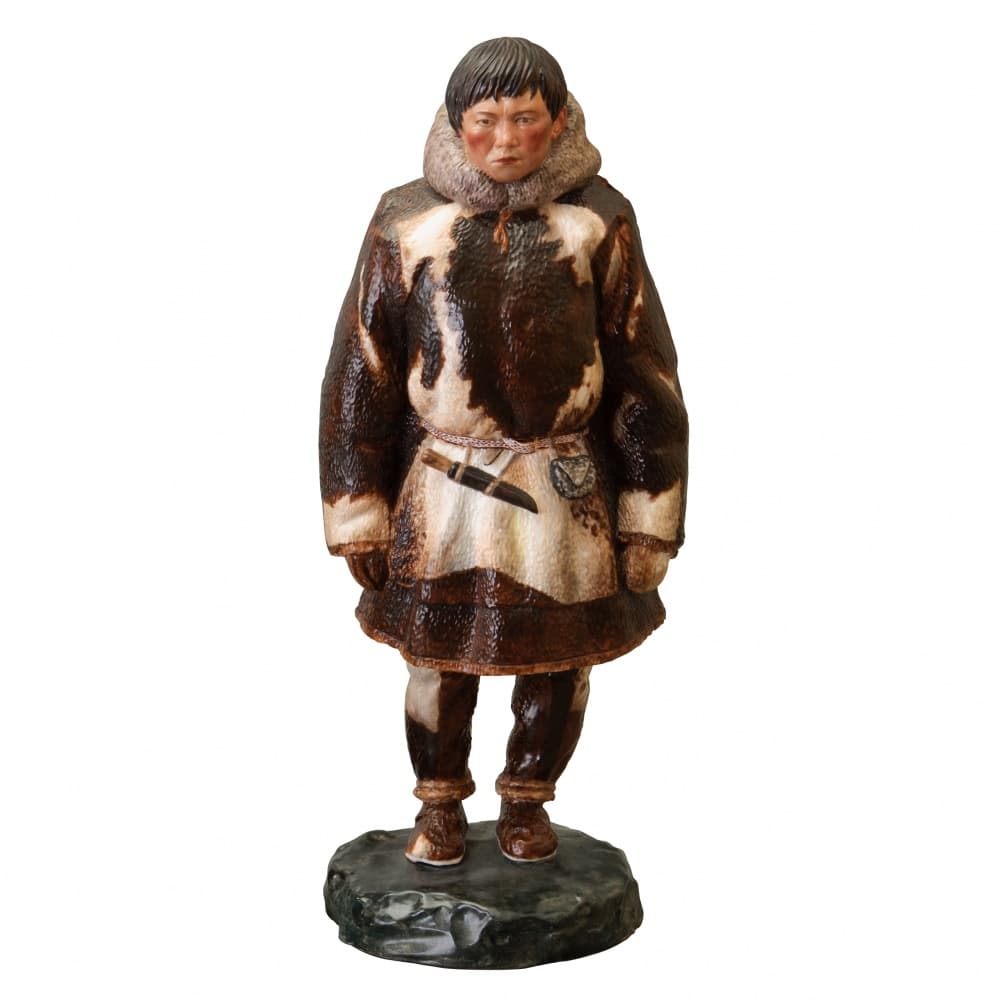 SCULPTURE "CHUKCHI MAN" FROM THE "PEOPLES OF RUSSIA" SERIES
Feedback
Thanks! We have received your request and will contact you as soon as possible